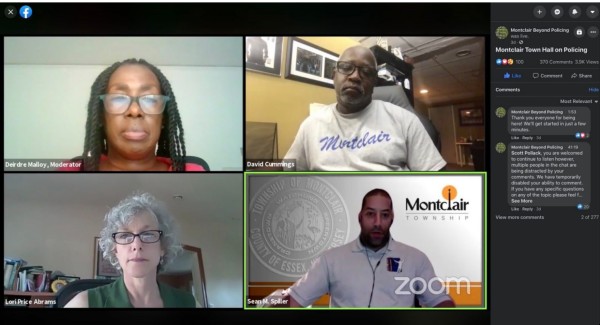 Presentations from the Montclair Housing Commission, Essex Skate, Pressman Social Action Interns, The Unitarian Universalist Social Justice Coalition and Undoing Racism Committee and Montclair Beyond Policing drove the discussion, which lasted for one hour and 40 minutes.

The town hall was live-streamed on Montclair Beyond Policing’s Facebook page, and as of July 22nd had over 360 comments and nearly 4,000 views. With almost 40,000 people residing in Montclair, close to 10% of the town’s residents may have viewed the discussion.

The conversation covered several issues, some of which have become topics of national debate since protests over police violence towards black people have swept the nation, part of the growing Black Lives Matter movement after the murder of George Floyd in May by a white police officer in Minneapolis. These issues included establishing rent-control, the treatment of skateboarders in town, defunding the police, and re-allocating police funds to other township departments.

“The points of opposition that are being pointed out by the MPOA are misleading,” said Scott. “We have had increases in properties throughout the township for many years, and those increases have never occurred because of rent-control.”

To address the issues of budgeting and police use of force in town, Pressman Social Action Interns Gabriel Slon, Caleb Levine and Sehaye Luks utilized data to explain the claims of progressiveness that Montclair prides itself on are contradictory.

“A budget is the biggest tell of a town’s values and priorities,” said Luks. “Money doesn’t lie.”

According to Slon, Montclair officers use force at a higher rate than 337 departments in New Jersey, out of 468 total departments. He acknowledged that the Montclair Police Department claims this is because when force is used, every officer involved has to file a report, so therefore the number is exaggerated.

However, the Pressman Interns fact-checked the department. They found that after accounting for duplicate reports, black Montclair residents are still about 300% more likely to have force used on them than white people.

The Pressman Interns also discussed the need for mental health and substance abuse professionals to deal with cases that armed police are not properly trained to respond to.

“One-third of use of force incidents in Montclair were in response to a mental health episode, and of these mental health-related uses of force, 78% of victims were black,” described Levine. “The type of incidents listed were suicidal person, emotionally disturbed person and psychological crisis. Are these the people our police should be using force on? We need a radical shift in our town’s policing policies.”

When comparing Montclair’s violent crime rate to officers per 10,000 residents, the Pressman Interns found that Wayne, Teaneck, West Orange, Ridgewood and Clifton all spend less than Montclair on policing.

“We are a complete regional aberration,” said Slon, a senior at the University of Pittsburgh. “These plots show us that lowering the police budget has not resulted in a higher crime rate in these other towns, and in fact, we outspend all of the towns we studied and still have a higher crime rate than most of them. Our spending is absolutely out of control and unjustifiable.”

“The time to be proactive against insensitivity within our system and our town is now,” asserted Luks. “Many of us are hopeful that Montclair can become the face of innovative, progressive social reform that we claim to be, but we can’t move forward if we don’t first acknowledge where we are. These statistics reflect poorly on our town,
and failure to act on this information will further expose prejudices within our community.”

“For roughly 20% of the [16 million dollar 2020] police budget, we could fund the entire cost of before and aftercare for 1,000 children for the entire school year,” explained Scherfen as she listed several ways to manage the police budget differently. “It would cost fewer than three percent of the total Montclair Police budget to add one licensed clinical social worker to each of the 11 public schools.”

Maya Jenkins, Lily Cui and Ella McDonald of Montclair Beyond Policing detailed the “organized abandonment” of public programs nationally as one of the main reasons why there is an increased police presence in schools, mental health crises and issues of homelessness. They argued that the defunding of education, healthcare and housing programs have most affected low-income black and brown communities.

“It’s sadly unsurprising that the police are weaponized against black people, in instances like Amy Cooper’s phone call in Central Park or others closer to home,” explained Cui. “We should understand these moments not as isolated racist acts, but in the context of a long devaluation of black life and the abandonment of black, brown and poor people to police management.”

Jenkins described the group’s proposed solutions to police overfunding in Montclair, including removing police from all schools, denying benefits and pay to officers under investigation for the use of force, and establishing non-police alternatives to calling 911 for health crises.

When asked if trained, unarmed professionals would be used to deal with mental-health crises instead of the police in the future, Mayor Spiller acknowledged the need, but could not provide much in the way of specifics.

“It’s a yes, we need those trainings to be exactly what they need to be, and reviewed and assessed for effectiveness,” Spiller explained. “But, we also can be looking at the components that can be handled by a different entity in another way, that maybe we have somebody who does this all the time versus just being trained in this while they are doing so much other stuff.”

After the town hall ended, Gabriel Slon, an organizer of the event, received feedback from participants applauding the presentations of the young people involved, but also criticizing the town councilors’ answers during the discussion.

“Many people expressed to me that the councilors’ answers left a lot to be desired and did not properly address the speaking points of the groups involved,” said Slon. “However, I’m grateful they participated and were willing to go in front of the public on this matter.”

Terrana described an encounter he had with a Montclair police officer in which he was “angrily approached” by an officer while skating near the Park Street YMCA, and was told by the officer that “if he wanted to, he could have arrested me,” when Terrana, a black male, had done nothing illegal.

He further explained that skateboarders in Montclair are long-used to a culture of harassment and evasion, as there is no skate park in town and skaters are often forced by the police to leave certain areas. If Montclair approved of a skate park in town, Terrana argued, many problems would be solved.

“We want our park to be an open, multi-use space that is inviting to families and people of all ages,” explained Terrana. “Some of the money that is funded to the Montclair Police Department could be redirected and should be redirected to youth services, where it belongs. It could help fund more youth programs and the building of beautiful, multi-use spaces such as our skatepark.”

Given the number of Montclair residents who watched or participated, the meeting remained mostly free of technical issues, other than the occasional troll in the live chat section, one of whom was disabled from commenting.

The discussion concluded with town councilors acknowledging the important perspectives and statistics shared, and the need for more conversations, with more community stakeholders and other groups. 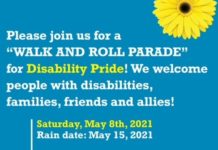