Montclair, NJ – Take a stroll down Montclair’s Bloomfield Ave. these days, and you might forget that the tallest commercial building, at least by sight, used to be just four stories. With the arrival of mixed-use apartment blocks and the highly-touted Wellmont arts district, today’s southeasterly gaze is interrupted by semi-bricked edifices of hulking proportion. However, despite these frenzied projects, one historical address still looms over pedestrians the same way it did a hundred years ago. At 429 Bloomfield Ave., the Beaux Arts Madison Building has long been known through its postal designation rather than its vacant storefront. Such will no longer be the case. 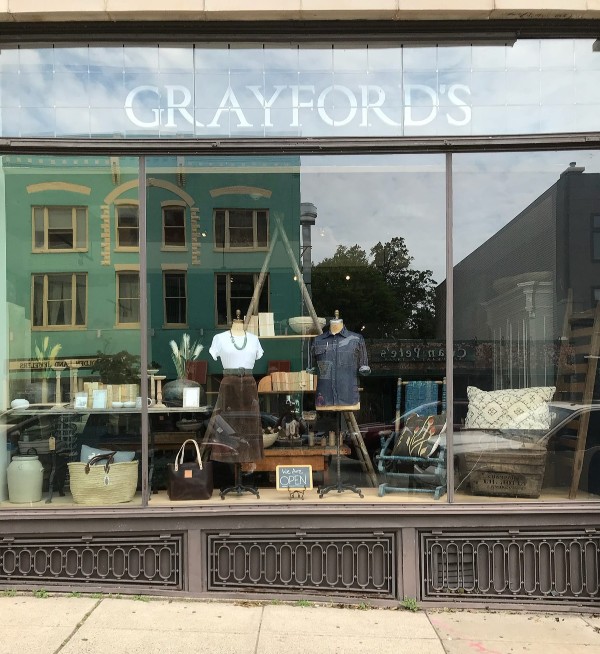 Enter Grayford’s 1931, a “lifestyle” collective that sells vintage and antique items of substantial make. Two months young and unique for the area, Grayford’s is run by 38-year-old William “Brad” Bonnema, a former retail professional who is bringing a splash of ephemera to the bustle of contemporary Montclair. Bonnema explains that the name on the sign, while exuding a certain gravitas, paid homage to his late grandfather, the store’s ultimate inspiration.

Here within the Madison Building (whose own founder envisioned the “arts and trades” under one roof), the Grayford’s space showcases bespoke, even artisanal pieces that fit the common home. With a brand-new tin ceiling and cedar-plank floor, the airy showroom invites guests to get close to its wares and learn about each one’s background. As people walk in, they are greeted by a seven-foot, cerulean armoire, with worn wooden sides that could fool any observer. In pristine condition, the dresser dates to 1850s Lyon, France, and Bonnema says he will probably sell it for $3000-4000.

Across the room, more novelties, functional as they are, peek out from every corner. Visitors seeking more organization in their life might consider a turn-of-the-century mailroom cubby, hand-crafted but rescued from a derelict Chicago factory. The three-inch mail slots can still hold knick-knacks and letters. While this piece and the armoire anchor one’s surroundings, a variety of chairs, lamps, and old clothing also line the walls. Other objects cannot be readily identified. The owner points to a mantel-like ledge bearing floral patterns and tracery. A crown molding, it once adorned a first-floor entry but was discovered beneath a drop ceiling. In this spirit, Bonnema remarks, “Everything for sale has a story” – even if nothing needs restoration.

He is quick to clarify the difference between “old and enduring” and simply “less than new.” Unlike the kitsch one might find in a thrift store, Grayford’s merchandise stops circa 1950, with its main focus on the early 20th and late-19th centuries. Much of the furniture is curated through estate sales and the liquidation of general stores, typically within Greater New England. As for the lion share of clothing, Bonnema is a member of the Vintage Fashion Guild, an online collective of fashion traders that supplies couture labels like Suzy Perette, Gigi Young, and Georgia Bullock. Overall, this “retrospective” retailing stems from Bonnema’s aversion to the mass consumerism he says began after World War Two. With a massive industrial complex and high consumer demand, most department stores started producing cheaper wares that would eventually take on the state of planned obsolescence. Perhaps the most tangible evidence can be found when perusing Grayford’s many racks of blue jeans. Though reliably snug, the jeans’ real distinction arises from the stitching with which they were sewn, a process known as “selvedge.” The hybrid term, amalgamating “self” and “edge,” refers to the denim stitching that runs from the waistband down the inner pant leg. Older shuttle looms would close off the denim weave with an extra band of material, preventing the former from unravelling. This nuance in fabrication means that Grayford’s product, while slightly more expensive than a big-box store, “was made to last longer,” according to Bonnema.

Looking around, one can hardly believe that some of the merchandise has lasted that long. In many respects, Grayford’s is a love letter to living history, trading the stuffiness of a cramped antique store for the gentle marriage of past and present. With its hand-painted, tapered lettering, a rectangular sign marked with the word “menuiserie” conjures a bygone age of wooden porches and dry goods. Today, the prop-like carpenter’s placard sits proud and undecayed against an exposed masonry wall. The most striking aspect of this cozy place is that nothing actually smells old. Bonnema, whose cashier’s stool is really a repurposed tractor seat, emphasizes his “everyday living” approach to acquiring the well-salvaged. Raised in a small town, the owner rarely had access to the large department stores that characterized urban design centers like New York. What he did realize, though, was that the city’s growing affinity for high-rent real estate did not necessarily mean it offered a better shopping experience. In this way, one may recall the gradual commercialization of Manhattan’s quirkiest neighborhoods, some whose ground-level boutiques were later taken over by Duane Reade, Walgreens, and the like. Grayford’s specifically sought Montclair because of the town’s fascinating middle-ground between business and preservation.

It seems fitting, too, that a pre-war space should receive merchandise contemporary to its own creation even as mid-century giants like Hahne’s (now the Siena Building) have since moved on or been demolished. In the future, Bonnema hopes to see younger buyers latch onto the Grayford’s model, perhaps in place of less authentically “retro” outlets such as Restoration Hardware, which try to effect a classic worn look. When asked about his favorite item, he pulls out a pamphlet book dating to 1931 – an original promotional for the Madison Building. Found behind a plaster wall during move-in construction, the tiny paper token now rests on a back shelf, quietly offering its good will to the discerning passerby.

Rhys Williams is a rising senior at Seton Hall Prep.