A Black Kids Matter protest in Montclair, attended by more than 200 children, students and adults Saturday, sitting in socially distanced groups on the sprawling grounds of Rand Park, featured musical performances and passionate speakers, including many former students of Montclair Schools who spoke about their experiences with racism while attending Montclair Public Schools.

A wide-ranging group speakers took the podium including Assemblywoman Britnee Timberlake and former Assemblyman Craig Stanley, who co-sponsored the Amistad Bill; Lawrence Hamm of People’s Organization For Progress; and Caryl Lucas, founder of Unstoppable Girls, a nonprofit organization dedicated to bully prevention and the health & wellness of girls.

The event was organized by Montclair parent Natalie Hackett, along with Montclair High School students and other parents including Abraham Dickerson, the force behind Montclair’s first march in June. Hackett has taken legal action against the Montclair Public School district and says the district failed to address prolonged bullying her daughter experienced at Buzz Aldrin Middle School.

Montclair High School graduate and pro basketball player Alexandria Kerr, who electrified the crowd at Montclair’s first Black Lives Matter rally and march, started the day off by calling for the community to hold the school system accountable.

“We can teach our children that racism is not OK and that the mistreatment of people for the color of their skin is not normal. We call for Montclair to be part of the solution,” said Kerr.

Aja Bussey, another MHS alum, currently a student at Howard University, said Montclair is no different than Maplewood, Newark or any other town.

Activist Lawrence Hamm of People’s Organization for Progress (POP) spoke at the Black Kids Matter rally before heading off to rally for reparations in Newark.

Hamm said Hackett had the full support of the POP.

“Whatever the problem is, they better straighten it out. Otherwise, we will march from Newark to Montclair and I don’t think they want to see that here in Montclair, New Jersey,” said Hamm, adding that he is a resident of Montclair since 1970 and the father of two daughters who went through Montclair schools.

“I have to say of my 30-some odd years here, the proudest moment of my living in Montclair was when I saw thousands of people in Montclair march to say that Black Lives Matter,” said Hamm, who also spoke, in front of the Montclair Police station, at that first rally. 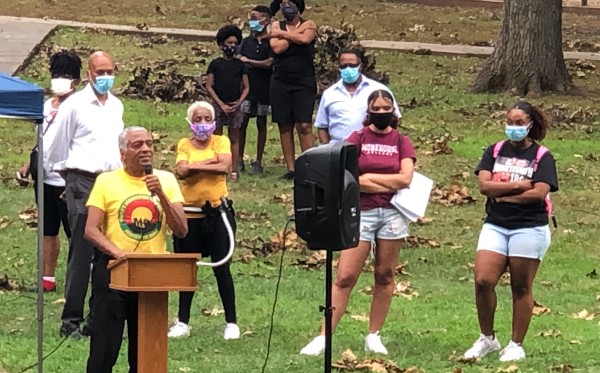 “Black students were told to stop being so sensitive and to stop making racist students feel bad,” Dickerson recalled. “It’s time to stop telling Black students to simply shrug off discrimination. Black students matter more than the racist views of other students. We sweep everything under the rug in this town because we want to pretend there is no racism.”

Nancy Marie Jones, a member of Montclair High School’s Class of 2020, said the problem is teachers and administrators making it a comfortable space for racism, citing how she, as a mixed-race student, experienced bullying and racist remarks at every school she attended in the district. Jones said there was never a response until her mother pushed the issue with the school.

“Montclair is a very dangerous district,” said Sweatt, adding that both she and her daughter went through the district and both experienced racism and were victims of discrimination.

“We worked hard to make structural changes in the district to ensure children are protected and respected,” said Sweatt, adding that her group worked tirelessly to get an anti-racism policy in the district, but now she believes there is an effort to dismantle it.

Sweatt, who called for the resignation of Interim Superintendent Dr. Nathan Parker, stated that black parents become criminalized when they fight for children.

“When the parents try to step up to protect children, you’re calling the police?” Sweatt said, referring to when a police officer came to a February 2019 Montclair Board of Education meeting.

Then Sweatt said another effort of the NIBPA was to get the position of the Student Equity Advocate position created in the district. Sweatt then played a clip of Parker discussing a change to the position.

“Montclair, we’ve been played. We allowed a temporary person to come into our community and when he came into the picture, the Student Equity Advocate disappeared.”

Graham spoke about what he learned during his time as the Student Equity Advocate, speaking to students in the Montclair Schools.

“When they designed the position, a part of my duties and responsibilities was to collect and analyze data. And when I saw and identified inequities, then I would give direction to the district, to the schools, to the principals and to the teachers.”

Graham was asked to report on his findings to the Montclair Board of Education in November 2018.

“They told me horror stories of abuse, of being called out in the middle of class. Being railroaded from being in advanced classes. Black boys being shipped to special education, IEPs not even being followed. It was my job to expose this reality and to hold the district accountable for making corrections. And as soon as I began to do that, that is when the sabotage began to happen,” said Graham.

“Just because a board member is a part of the African American race, does not mean they are part of the African-American agenda. These are the same people that demanded that they get rid of position. They were demanding to get rid of a position designed to make sure Black children are treated fairly,” said Graham.

Graham, who is now an online pastor, claimed the leadership of the Montclair Education Association also sabotaged his work.

“There are some teachers and some social workers and a few principals who actually care about Black children,” said Graham, adding that ultimately no one would work work with him.

The event closed with Hackett speaking to the crowd, detailing the experience of her daughter being bullied by students at Buzz Aldrin Middle School.

Hackett said at first the school administrators responded to her concerns and tried to do something, but then things changed.

“When they were realized there were systemic issues that kept going on on and on again, then perhaps at that time, that’s when they backed off and started to blame the victim,” Hackett theorized. “They told me my daughter should choose better friends, even though they weren’t her friends.”

She said her complaints fell on deaf ears and incidents she reported were not investigated.

Hackett called the bullying at the middle school an epidemic and said because she is an educator, she offered suggestions to the school such as peer mediation groups, getting PerformCare to do outsource counseling or implementing empathy classes. Hackett said she was told by a Montclair Schools employee that she was the problem.

Hackett said she heard that some of the speakers who participated in Saturday’s Black Kids Matter event were told not to participate, that the event was “dangerous.” She said since sharing her daughter’s story, others have contacted her and she is learning of other children suffering in the community, including LGBTQ students.

“Where are our elected officials today? They are nowhere,” Hackett said. “It’s not about making the town look bad, it’s about making it better. “This is not about my daughter. This is about all the children in this community that deserve the very best, that deserve to be treated with respect and kindness. There needs to be a message that goes so clear that this ends here and now and will not be tolerated. This is a call to action.”

Baristanet contacted Mayor Sean Spiller regarding the reports of racism in Montclair Schools, not just at Saturday’s rally but also vocalized at the student-organized Unity Walk and asked Spiller how these reports would impact any future BOE appointments. Spiller sent this statement:

“Social justice and equity are the bedrock principles on which our township stands.

Although HIB guidelines preclude me from addressing any specific matter, as Mayor, and as a person of color, I find any instance of racism in our town deeply disturbing, especially when directed at our children.

I know our district has already been focused on the eradication of institutional racism through the implementation of Restorative Justice Practices. That work must continue and be expanded.

Fighting for the Montclair ideal — the notion that everyone, regardless of race, gender, religion, or sexual orientation is equal — requires sustained focus and constant vigilance.

It is a commitment to that ideal that will guide my administration and my decisions.”