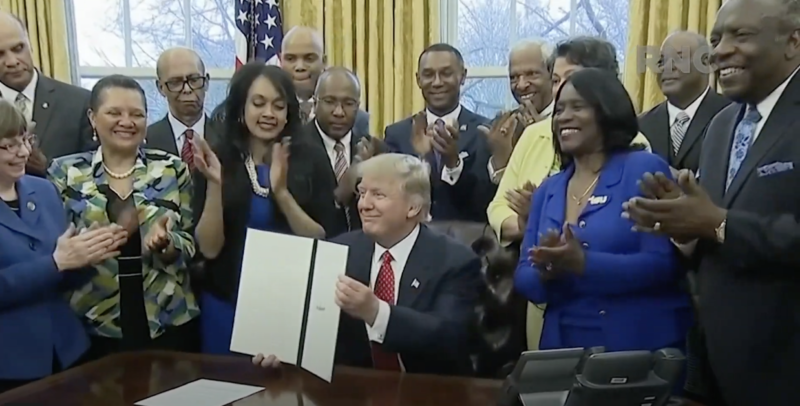 UPDATE: Lezli Baskerville says she will take action regarding Trump administration misappropriating her likeness. Statement below.

In a video that appeared Thursday evening during Day 4 of the Republican National Convention, there was a familiar face – one that looked a lot like longtime 4th Ward Councilor and mayoral candidate Dr. Renee Baskerville.

We and others were fooled – but that’s because it was Baskerville’s twin sister – Lezli Baskerville, a lawyer and president and CEO of the National Association for Equal Opportunity in Higher Education.

Lezli Baskerville appears in a convention video in a group meeting with Trump. The footage is used in a package praising Trump on public housing, but the video is from a meeting with leaders of Historically Black Colleges and Universities in February 2017.

Lezli Baskerville, in a letter to HBCU presidents in August 2017, said Trump’s response to “the national disgrace that was Charlottesville and the false equivalency he made between the Nazis/white supremacists and those who opposed them” had given HBCU leaders reason to doubt Trump’s competency, Mother Jones reported.

Dr. Renee Baskerville has been involved in efforts in Montclair to mobilize and be part of the anti-Trump resistance.

The Trump Administration is misappropriating my likeness, that of the members of the National Association for Equal Opportunity in Higher Education, the Nation’s only membership and advocacy association of the CEOs of all HBCUs and PBIs, a not-for-profit and non-partisan association, over which I am privileged to serve. The Trump Administration is misrepresenting, for political purposes, a non-political, non-partisan, White House event, the signing of The Executive Oder on HBCUs. The signing of the Executive Order on HBCUs is a White House executive event that has occurred at the beginning of every New Administration since President Jimmy Carter signed the initial Order. To miscast that event as support for President Trump is reprehensible with potentially far reaching legal ramifications.  I have consulted counsel and we will take appropriate action

Let me further share with you why I am offended and concerned.  I am a seasoned constitutional justice lawyer who was humbled and thrilled beyond measure when my alma mater, Howard University School of Law recognized me as such two years ago when bestowing upon me its coveted Lifetime of Achievement Award. I have spent my entire life using my gifts and talents to expand opportunities for those of least advantage in America and around the globe.  I have been privileged to meld my profession and my passion while serving as “the voice for Blacks in Higher Education” as President & CEO of NAFEO for more than 16 years and as its outside pro bono counsel before that. I served as national legislative counsel for the NAACP, education and voting rights counsel at the Lawyers Committee for Civil Rights Under Law, Counsel of the Law & Justice Committee of the National Black Caucus of State Legislators, as a senior staff member for Members of Congress and congressional committees and Vice President of The College Board.  I was Coordinator & National Policy Director of the 20th Anniversary March on Washington for Jobs, Peace and Justice whose 57th anniversary I will join in celebrating today at the recommitment on the Mall.

That the Office of the President, which is the owner of the photos used in the Trump 2020 video, would cast me in a false light, the association over which I humbly and confidently serve, and the presidents and chancellors of the nation’s HBCUs, is a dastardly deed that must not go without remediation.