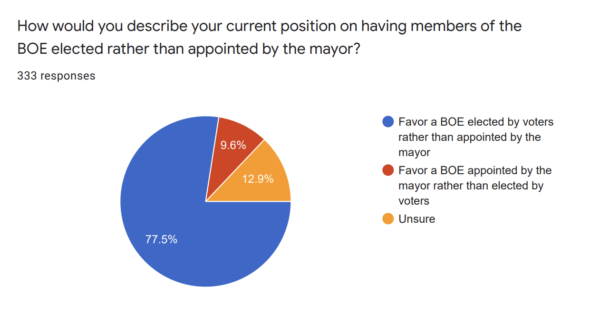 According to the initial survey, more than three out of four respondents (77%) said they favored an elected BOE, with 13% saying they were unsure, and 9% saying they were in favor of retaining an appointed board.

The Township of Montclair is currently one of only 11 out of 565 municipalities in New Jersey where members of the local Board of Education are appointed by the mayor rather than elected by popular vote. The League of Women Voters has released a statement in favor of maintaining an appointed BOE in Montclair, adding that past referenda on this issue were held in 1963, 1969, 1971, 1995 and, most recently, 2009 – and all were unsuccessful.

D’Amato says 333 residents responded to the survey. Many were unsure of the ward they lived in, which may correspond to a historic low voter turnout and suggest a need for more communication to residents identifying the wards and the role they play in the municipal election by the Township.

The survey asked respondents to identify which type of elected BOE model they would favor. Respondents were asked to choose between a nine-member board with three groups of members elected “at large” each year — the standard in New Jersey — and a novel model in which two members would be elected from each of Montclair’s four wards, with a BOE president elected at-large. Among those who favored an elected board, 80% favored the ward-based model, while among those who favored retaining the appointed model 72% favored the ward-based approach.

Meanwhile, some respondents suggested alternate models, including a nine-member board with one member elected from each ward and five elected at-large.

Vote Montclair is holding a second “runoff” survey aimed at further gauging voter support for different BOE models, as well as the timing of any drive to place the matter on the ballot.

Respondents were asked to rate the performance of Montclair’s public schools compared to their potential on a five-point scale, resulting in an average of 2.9 out of 5.0. Just over 75% of respondents said they have one or more children currently enrolled in the Montclair Public Schools, and an additional 16% had one or more children who previously attended. 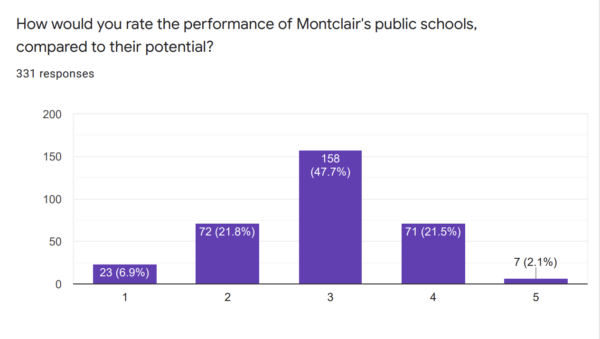 Majority Support for Switch To November Elections
A large majority of those surveyed also favored having all elections for Township offices in November rather than May, to help raise what traditionally has been notably low voter turnout and engagement.

Support for moving Montclair’s municipal elections from May until November was strong among both supporters (89%) and opponents (69%) of converting to an elected BOE model. 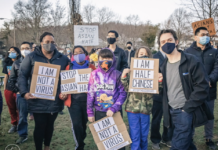