Donald Trump’s fear mongering is gaining traction with voters in key states, disliking the president doesn’t mean a person will vote for Joe Biden and voters could care less about policy issues.

These are some of the thoughts correspondents and editors shared about the 2020 election at a virtual discussion Sunday afternoon, sponsored by the Montclair Literary Festival.

Hirschfeld Davis and Michael D. Shear recently wrote Border Wars: Inside Trump’s Assault on Immigration. Alter penned The Ones We’ve Been Waiting For which profiles the next generation of Democrat and Republican leaders. 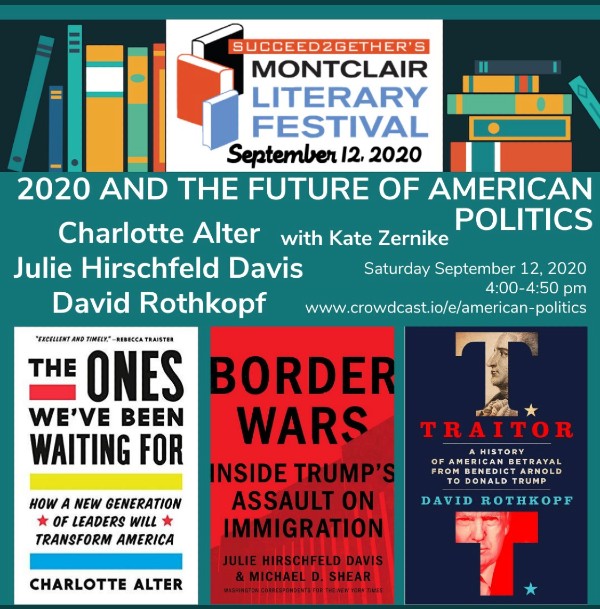 Authors discussed Trump’s tactic of fear mongering–fear of “extreme socialists,” immigrants or chaos in the suburbs.

The socialist message plays differently depending on a voter’s demographic, according to Alter. Older voters equate socialism with the Soviet Russian threat they grew up with. Younger voters see socialism as the Swedish model, where everyone has health coverage, says Alter.

“One of the things I have seen in the last couple of weeks is that the former group, the people who think of socialism and equate it with totalitarian communism, those are the people who live in these states that are going to decide the election,” says Alter.

“Polls show that Biden is leading in some of the key battleground states…but the lead has tightened,” says Hirschfeld Davis. In the 2018 mid-term election, the fear tactic didn’t fare as well for Trump. The Democrats gained a majority in the House of Representatives. That majority is dominated by middle-of-the-road democrats.

“The reason that democrats won in 2018 is because they won in these marginal districts which in many cases Trump had won in 2016 and Clinton had lost. They had a conservative leaning electorate. They’re a lot of independents. And many of them are suburban places where issues like immigration and these cultural issues, these very raw appeals that Trump was making, did not resonate with voters,” says Hirschfeld Davis. “The real engine of the Democratic majority is the more centrist members.” The strength of Democratic votes leaning toward the center also prevailed this year in the primaries.

“If you look at the presidential primary you had a lot of energy on the left..but the person who ended up getting the nomination was Joe Biden,” says Hirschfeld Davis.

Based on her reporting, Alter cautioned about making assumptions on Biden’s support. “I’m hearing a lot of people say I don’t like Trump, he sucks for this reason, I don’t like the thing that he did, but I don’t know about Joe Biden,” says Alter. “I think there’s an assumption that disliking Trump automatically translates into a vote for Joe Biden. And I have heard from enough people that are sort of ambivalent about Joe Biden that I don’t know if that’s a sure thing.”

During the Q&A session one viewer asked how much does policy influence voters.

“I wish had words to describe how little the voters I met in Wisconsin and Michigan care about policy, care about the reports of the president calling fallen war dead losers and suckers, care about the Bob Woodward tapes that came out, care about the Politico report about the CDC meddling with Coronavirus data,” says Alter. “I think there is an expectation among people that think about this that everyone thinks about this…I don’t think these very specific policy distinctions are landing in the places Joe Biden needs to win.”

Hirschfeld Davis shared her own experience on voter ambivalence on policy. “In reporting for my book and covering the Trump White House, Whenever I would go to a Trump rally and talk to people, almost invariably…three quarters to 80 percent when I would ask what do you like best about Trump, they would say something about the wall or immigration. If I asked a follow-up question about policy there was nothing there. It was just a very visceral, emotional thing.”