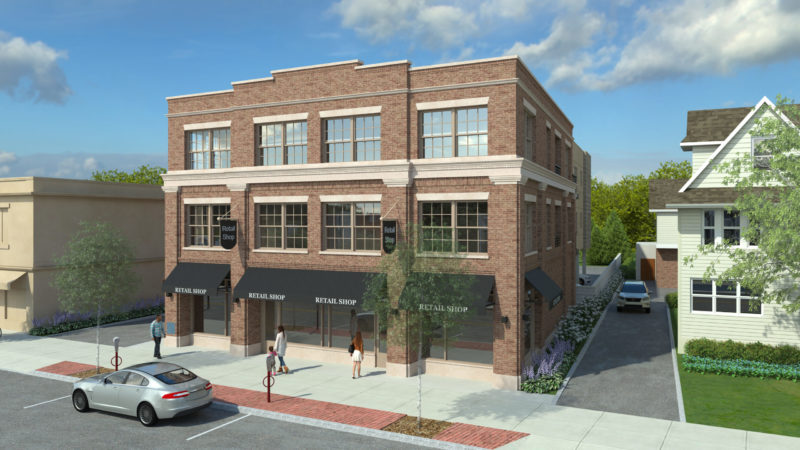 Awardees will be recognized at the Commission’s upcoming meeting to be held on Thursday September 24, 2020.The remote meeting will be held at 7:30 p.m. via WebEx Events. Connection information to join the meeting is available at montclairnjusa.org/hpc

The Commission is pleased to announce the following award recipients:

Ms. Eshelman notes that she has restored “every square inch of my house, from chimney liners and a new roof to asbestos abatement for basement flooring and everything in between.” Built as workman’s housing prior to 1908 (Montclair map) it is situated across the street from Erie Park, a stone yard at the turn-of-the-century. Restoration of the exterior facade included re-shingling and replacement of windows in the original configuration when the originals could not be salvaged. An Arts and Crafts aesthetic guided her choices for the details. From the weathervane to the lattice work; from the front door to the exterior lighting; all exhibit the hand-made look of the era.

The newly constructed Wesley building stands out in town with its use of quality materials and its design. Although it’s one story higher and bulkier than adjacent properties, the developer complimented the Watchung Plaza Historic District’s architecture with an engraved building name, layered dental molding and a brick exterior in a variety of colors and patterns to provide the texture and interest of bygone craftsmanship. The building is elegant in its simplicity, combining historical features with a now popular industrial look of iron balcony railings and black awnings.

The Shade Store, a national franchise, recently opened a retail store in the Town Center Historic District in Montclair. They took a “tired” storefront and transformed it into a brand identifying facade while working with the HPC to ensure that the new store-front conformed to the district guidelines.

Employing the company’s distinctive branding look, they faced the non-original facade with aluminum panels and used brushed steel, edge-lit letters in a dark bronze finish to identify their location. Unearthing the existing facade, they confirmed that none of the original remained before commencing with the work. Their message of mass customization with a national reach continues into the interior, which is light and airy. This is a successful example of how a nationally recognized company worked with the local HPC to revitalize a historic building facade.

Restaurateurs Dominique Paulin and Oliver Muller have taken a former mid-century bank building on Bloomfield Avenue and transformed it into a lively and chic dining spot in the Town Center Historic District. Capitalizing on an adjoining exterior patio, the restaurant spills into bi-level garden space complete with a water feature. Metal, wood, and glass accents combine to create a modern ambiance with a French accent. Care was taken to clean the brick facades and maintain the original window openings. This adaptive-reuse project within the historic district demonstrates the success of renovating, restoring, and reusing a historic building. The modern vibe works perfectly with the ca. 1948 exterior both inside and out. This Bricks and Mortar Award demonstrates the successful result of entrepreneurs, architects, landscape, and interior designers in the historic district.

The Paper Plane Coffee Company opened in September 2019 in a circa-1928 Gothic Revival commercial building developed in the 1920s by the Chancellor Development Corporation of Newark. This project preserved and maintained the largely original exterior, with respect for its design integrity and materials. On the interior, it enhanced the historic features that give the space character. Overall, the revitalized storefront has added vibrancy to the building and elevated its historic character.

The Women’s Club of Upper Montclair is celebrating their centennial in 2020. A member of the New Jersey State Federation of Women’s Clubs of the GFWC – Liberty District, the Upper Montclair Club incorporated in 1920, has a long history of community involvement including Autism Awareness, Operation Smile, Canine Companions for Independence, and their current project as Court Appointed Special Advocates of New Jersey (CASA). For the past century the club house, constructed in 1923 and designed by famed local architect, Francis Augustus Nelson, has been maintained by the Club.

The building, an outstanding example of Colonial Revival is one of many designed by Nelson in Upper Montclair including the Upper Montclair post office, the library, St. James Memorial tower plus numerous notable residences. It is in the Upper Montclair Historic Business District. The Upper Montclair Women’s Club members have been faithful stewards in preserving the exterior, interior and the grounds of this unique example of Women’s’ Clubs of the era. It is fitting that we celebrate their century of work and dedication to the community with this Preservation Service Award.

The age of Covid-19 restrictions did not deter the Montclair History Center from celebrating the 100th anniversary of the Women’s Suffrage Movement. Combining an online lecture, a blog posted on their website and a magazine article in a local journal, the History Center celebrates the women’s fight-to-vote movement of the 1920s and brings it forward to our era. Research based on the History Center’s archives highlight the local proponents of the movement within the Montclair Equal Suffrage League. Lucy Stone, who lived at 119 North Mountain Avenue and created the National Woman Suffrage Association in 1869 was not the only suffragette to have lived in Montclair. This local involvement makes it especially significant to understanding the nascent tenets of the movement. The History Center has done an outstanding job in presenting this important narrative in the various formats available in our own time.

Lacordaire Academy opened its doors in 1920 as an independent educational facility by the French branch of the Dominican order. The mansion, which was the convent for the school until three years ago, was built in 1894 for Dr. Morgan Ayres and his extended family. Commanding pride of place on the north-west corner of Lorraine Avenue and Park Street, this structure was considered one of the “finest residences in Upper Montclair” at the end of the 19th century. Known as “Homeland” on the 1906 Essex County tax map, it was built in a Richardsonian style with a massive brownstone foundation. It also boasts delicate Queen Anne detailing in its fanciful column capitals and elaborate scroll-work in the entry gable. The imposing turret and broad front porch epitomize the high Victorian style. The grand entrance hall is fitted with mahogany spindles, fretwork, stained glass, and a staircase inglenook. The Dominican sisters have been faithful stewards in their maintenance of the house, carriage-house, and the grounds. In this year of the 100th Anniversary of the founding of the school and the 125th year of the creation of this magnificent mansion, it is fitting we acknowledge their dedication with a Preservation Service award.

Preservationist of the Year Award

In 2010 he was a founding member of Friends of the Bellevue Avenue Library, formed in response to the town’s closure of that branch. He went on to become its vice president and then its president. As an avid Bellevue Branch patron since boyhood, Ilmar recognized the importance of the branch to the community and the significance of the building to the historic fabric of Upper Montclair. He understood that if the building were closed, the fate of that 1914 Francis A. Nelson Carnegie library would be in jeopardy.

Along with other concerned citizens, Ilmar worked strategically and tirelessly to build a coalition for keeping the branch open, to raise money, to organize volunteers, and to demonstrate public demand for the branch’s services. He was often the public voice of the Friends, speaking at township council meetings and to the media, as well as acting as a diplomatic lobbyist. The result of all this hard work is that the library was closed for only six months rather than permanently. Not only did the Township reopen the branch in June 2011 but it invested money into protecting the structure’s historic integrity by restoring its character-defining Austral windows.

For the branch’s centennial in 2014, Ilmar and others planned a yearlong celebration with 16 community programs attended by about 1,000 people. These entertaining and educational events included a presentation on the library’s history and a community gathering in the library with a descendant of Andrew Carnegie. Ilmar would be the first to say he did not do all this alone, which is certainly true. But as an energetic advocate, he was instrumental in bringing likeminded people together to successfully achieve daunting preservation- and history-oriented goals.

Growing up just one block from the boyhood home of the Apollo astronaut Buzz Aldrin, Ilmar has a deep enthusiasm for that hometown hero. In March 2015 he joined the “Man on the Moon” Committee, which had the goal of renaming Mount Hebron Middle School in honor of Aldrin. Ilmar spoke at School Board meetings and carried out other advocacy work with the committee to ensure that Aldrin’s historic achievement would be commemorated in a substantive, enduring fashion in Montclair.

When this beloved community landmark suddenly closed in November 2017, Ilmar quickly responded by creating the Save Montclair’s Historic Bellevue Theater Facebook page. Less visibly, he took a lead role as a volunteer matchmaker, working with the theater’s owner to find a new tenant or buyer to reanimate the darkened theater. He spent hours speaking with different parties and arranging and attending meetings in the service of bringing the theater back to life.

The Bellevue, built in 1922, is a key building in the Upper Montclair Historic Business District. Ilmar understands its significance as both a community touchstone and as an architectural anchor in Upper Montclair. He is also keenly aware that bad things can happen to old buildings that remain vacant and therefore worked with a sense of urgency to help find a tenant that would be a good steward of the building’s Tudor Revival architecture. When the new tenant proposed plans for adaptive reuse to the Historic Preservation Commission in 2019, Ilmar attended and commented. He has also been in conversation with the Montclair Public Library to present a slideshow there on the history and future of the theater.

Although the pandemic has slowed the progress of the team preparing to revitalize the Bellevue, Ilmar’s efforts to propel its rebirth should not be diminished.

As a resident of Montclair’s historic Oakcroft for a half-century, Ilmar has a firm grasp of what makes this early 20th-century suburban commuter neighborhood architecturally cohesive and historically rich. He also understands the benefits of protecting those qualities by having the neighborhood designated a local historic district.

At meetings of the Historic Preservation Commission in 2019, it took courage for Ilmar to speak in favor of designation when angry residents, some of them his neighbors, spoke against it. Although the designation effort did not proceed because of opposition, Ilmar contributed an important voice in favor of residential districting in Montclair.

The Montclair Historic Preservation Commission (MHPC), established by ordinance in 1994, is responsible for protecting Montclair’s architectural heritage and increasing public awareness of the unique historical and cultural dimensions of the Township’s buildings, streetscapes, and landscapes. For more information, please visit the MHPC website.