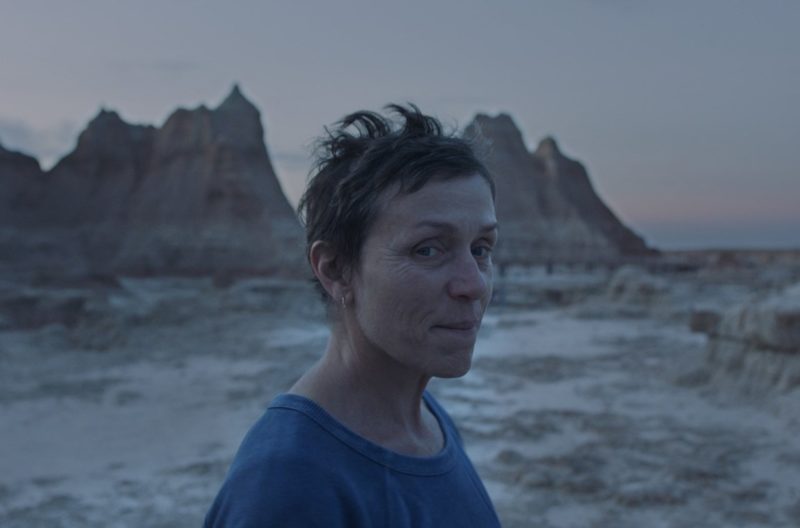 The festival will open on Friday, October 16, at 9:30 PM with a screening of Chloé Zhao’s NOMADLAND. Following the economic collapse of a company town in rural Nevada, Fern (Frances McDormand) packs her van and sets off on the road exploring a life outside of conventional society as a modern-day nomad. The third feature film from director Chloé Zhao, NOMADLAND features real nomads Linda May, Swankie and Bob Wells as Fern’s mentors and comrades in her exploration through the vast landscape of the American West. NOMADLAND is a Searchlight Pictures release, and the screening is co-presented by Investors Bank.

On Saturday, October 24, at 9:30 PM, Regina King’s ONE NIGHT IN MIAMI… will screen as the festival’s Closing Film. On one incredible night in 1964, four icons of sports, music, and activism gather to celebrate one of the biggest upsets in boxing history. When underdog Cassius Clay, soon to be called Muhammad Ali, (Eli Goree), defeats heavyweight champion Sonny Liston at the Miami Convention Hall, Clay memorialized the event with three of his friends: Malcolm X (Kingsley Ben-Adir), Sam Cooke (Leslie Odom, Jr.) and Jim Brown (Aldis Hodge). Based on the award-winning play of the same name, ONE NIGHT IN MIAMI… is a fictional account inspired by the historic night these four formidable figures spent together. It looks at the struggles these men faced and the vital role they each played in the civil rights movement and cultural upheaval of the 1960s. More than 40 years later, their conversations on racial injustice, religion, and personal responsibility still resonate. ONE NIGHT IN MIAMI… is an Amazon Studios release.

On Saturday, October 17 at 9:30 PM. Francis Lee’s AMMONITE, starring Kate Winslet and Saoirse Ronan, will screen as the Festival’s Fiction Centerpiece. In 1800s England, acclaimed but unrecognized fossil hunter Mary Anning (Kate Winslet) works alone on the rugged Southern coastline. With the days of her famed discoveries behind her, she now searches for common fossils to sell to tourists to support herself and her ailing mother. When a wealthy visitor entrusts Mary with the care of his wife Charlotte Murchison (Saoirse Ronan), she cannot afford to turn his offer down. Proud and relentlessly passionate about her work, Mary initially clashes with her unwelcome guest, but despite the distance between their social class and personalities, an intense bond begins to develop, compelling the two women to determine the true nature of their relationship. AMMONITE is a NEON release.

The festival’s Non-Fiction Centerpiece, Derek DelGaudio’s IN & OF ITSELF, directed by Frank Oz, will screen on Saturday, October 24 at 6:30 PM, and will feature a live, socially distanced, in-person Q&A with Frank Oz, Derek DelGaudio, and Executive Producers Stephen and Evelyn Colbert. IN & OF ITSELF is a performance film unlike any you have seen before, capturing Derek DelGaudio’s intimate, mind-boggling story of identity and illusion. Filmed live and harnessing the collective experience of the audience to create an allegory of the events, ideas, and roles that define who we are, DelGaudio uses his skill as a storyteller to craft a moving story of redemption, one which forces us to explore the boundaries of our own identity.

On Tuesday, October 20 at 7:30 PM on MFF’s Virtual Cinema, will present MINARI as the festival’s 2020 Virtual Centerpiece. A tender and sweeping story about what roots us, MINARI follows a Korean-American family that moves to a tiny Arkansas farm in search of their own American Dream. The family home changes completely with the arrival of their sly, foul-mouthed, but incredibly loving grandmother. Amidst the instability and challenges of this new life in the rugged Ozarks, MINARI shows the undeniable resilience of family and what really makes a home. MINARI is an A24 release.

“We are so proud to be able to share the work of these incredible filmmakers at our festival,” said Montclair Film Executive Director Tom Hall. “This year has been so difficult for our industry, and to be able to persevere and bring the festival to our community feels like a gift. For us, each of these films a testament to the necessity and power of filmmaking, and we cannot wait for our audiences to discover them.”

The full 2020 Montclair Film Festival line-up will be announced on October 2, 2020. Tickets for Montclair Film members go on sale on October 5, with public tickets on sale October 8. To become a member or purchase tickets, please montclairfilm.org.