Reopening for personal care businesses happened at the end of June, which meant devotees of nail salons could return for a French manicure or much needed pedicure. Even with new safety guidelines, the return to the nail salon started off slowly.

“Reopening has definitely been hard,” says Bobby Sung, owner of Elite Nails and Spa, which is located at 148 Valley Road in Montclair. When the pandemic hit, Elite Nails and Spa closed for over three months. And when they initially were allowed to open indoors in June, following regulations, they were only allowed to service 25% of maximum capacity. But getting customers indoors proved challenging.

“People are scared to come inside to get their nails done, that’s why we made the patio,” he says.

When Sung says “made the patio,” he means it literally. After obtaining the appropriate permit from the township, Sung got to work building the wooden, tent covered patio. He spent $2,000 dollars and five days on this patio. He says if he had gotten it professionally done it would have cost about $8,000 or $9,000, so building it himself saved him time and money.

Elite Nails and Spa is new to Montclair, having opened in early December. So, it was especially hard to get customers since they did not already have a base of regulars. But they used social media to get the word out about their outdoor nail tent and were also featured on News 12. Their outside set-up has also attracted people who see it while driving by their salon — located on Valley Road where Nauna’s used to be — and stop to get more information.

“We’re very safe,” says Sung, of the precautions taken at the salon. “We have the sneeze bar and the plastic between chairs. We take [the customers’] temperature, and we sanitize.”

While other nail salons in Montclair have opened and now accept customers indoors under COVID-19 restrictions, Sung is a fan of his outdoor nail tent.

“Outside means open air, and people feel more comfortable and safe,” he says. 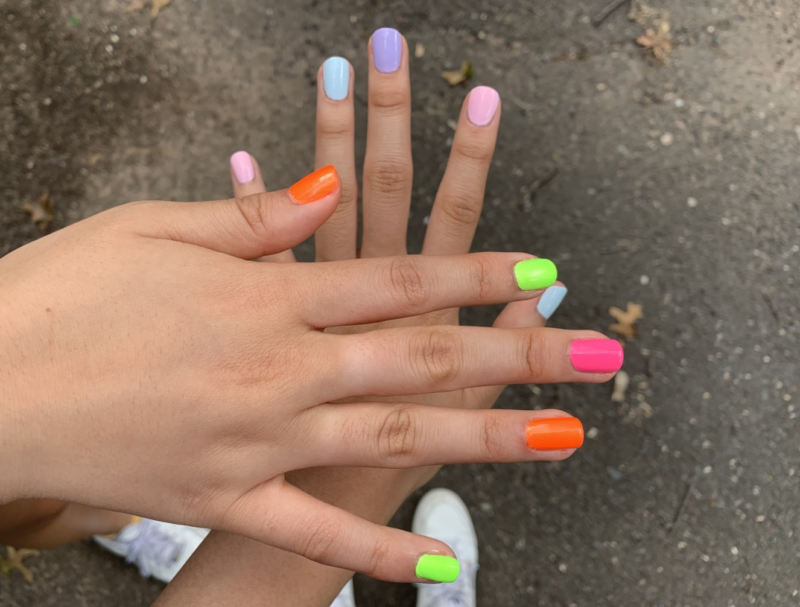 Naturally, I had to test this out myself. With glass between me and the manicurist, who was also wearing gloves, I felt quite safe. The employees were friendly and did a wonderful job on my nails. Being outside in the shade under the tent was an added bonus.

Georgia Chen is a rising senior at Montclair High School.