At approximately 3:27 p.m. Monday, Montclair Police responded to a Hillside Avenue residence on a report of a burglary in progress. The victim, a 17-year old female, reported that approximately two hours prior, she encountered an unknown male inside of the residence. The suspect demanded money and when the victim did not comply, she was physically assaulted. Her injuries were non-life threatening however, she was transported to Mountainside Hospital by a family member.

Proceeds from this incident are a laptop computer and a cellphone. The victim described the suspect as a dark-skinned black male, approximately 5’10 to 6’00 in height, very thin bony build, with large hands, big eyes, short black hair and a gap between his front two teeth. The clothing description was all black clothing, which the victim described as raggedy and dirty and he was wearing a standard green colored army camouflage COVID style mask. (The mask fell down briefly for her to identify the gap in his teeth). She also stated he had a large backpack on with what appeared to be a hammer inside of it. This is an active investigation. Anyone with information may contact Detective Joseph Anderson at (973) 509-4707 or Detective Sergeant Terence Turner at (973) 509-4730.

The following is a composite sketch of the suspect from the Hillside Avenue burglary on October 19, 2020: 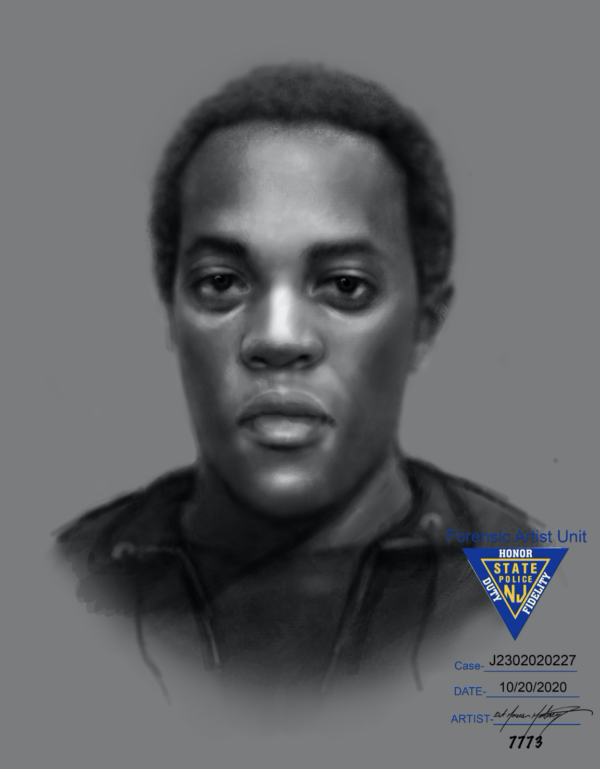 October 17, 2020 (Heller Drive): The resident reported that his attached three car garage was entered and all his vehicles were entered. Missing from one vehicle at this time are a custom set of golf clubs (set of 14 in a bag) valued at $3,000.00, a shopping bag containing brand new men’s dress clothes, pants and pullovers valued at $2,000.00. The remaining vehicles were rummaged through. The suspects also stole the following items from the interior of the garage: a black Sentry safe containing approximately $3,000.00 cash in unknown denominations, seven pairs of unknown men’s footwear sneakers valued at approximately $300.00, seven pairs of Oakley sunglasses valued at $200.00, two brown wooden custom Humidors valued at $500.00 containing approximately 600-800 aged cigars valued at $5,000.00-$10,000.00. Anyone with information, please contact Detective Joseph Anderson at (973) 509-4706.

Theft from Motor Vehicle
October 14, 2020 (Washington Street): A security guard at Charles Bullock School alerted a passing police officer that he observed two individuals break into a parked BMW X3. The vehicle owner was located and reported a pair of $350.00 sunglasses and $300 purse were stolen. One suspect was described as having high hair, wearing a black face mask, black shirt with multicolored squares, some of the squares were red. No other description was provided. They were last seen running through the parking lot between Mission Street and New Street.
October 18, 2020 (Maple Avenue): The complainant reported parking her vehicle near Glenfield Park between 11:30 AM and 1:00 PM. The vehicle was left unlocked and was rummaged through. Nothing was reported missing at this time.
October 18, 2020 (Claremont Avenue): The victim reported that her vehicle was entered between October 16, 2020 and October 18, 2020 while parked in her driveway. A $400.00 pair of sunglasses were stolen.
October 19, 2020 (The Crescent): The complainant reported that between 4:12 AM and 4:18 AM and unknown person entered his unlocked vehicle. Approximately $20.00 in cash and an Amazon package were stolen. Surveillance images show the suspect to be wearing a dark colored hooded sweatshirt, a mask (covering his face from his nose down), and dark colored pants and white shoes.