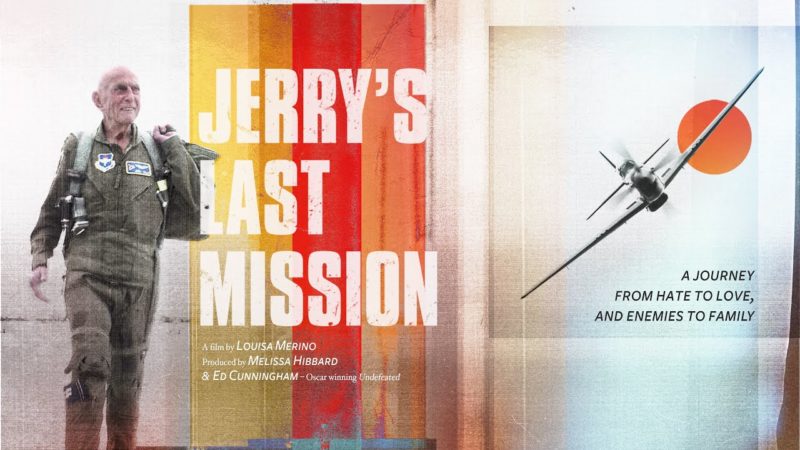 “U.S. Veteran Jerry Yellin is a great man with an important story of humanity.” – David Lynch

A P-51 fighter pilot, Yellin is the subject of a new documentary film, Jerry’s Last Mission. The film is available on line for free at www.jerryslastmission.com now through November 13.

Captain Yellin, a native of Newark, is a historical figure in the annals of WWII combatants, , having fought in the battle of Iwo Jima and flown the last combat mission of WW2 over Tokyo on August 14, 1945 .

Yellin returned home from the war to a dark life of survivor’s guilt and daily thoughts of suicide. He is forced to face his enemy once again when his youngest son moves to Japan and marries the daughter of his enemy, a Kamikaze pilot. The documentary tells his inspirational story of overcoming PTSD and turning hatred to love for his former enemy. Yellin had deep ties to New Jersey, was a state amateur golf champion and represented the United States at the 1965 Maccabi Games while a resident in New Jersey. His son and daughter-in-law reside in Montclair.

Montclair resident Michael Yellin, says of the film about his late father, Jerry Yellin: “I’m so thankful that my father’s story is being told in this documentary. He had a remarkable life, an inspirational life, that started in New Jersey and took him across the world. I hope his message of reconciliation, of healing, of unity, will resonate widely.”

All Q&A and film links, will be available via social media, the film’s website and through the festival’s partners, the David Lynch Foundation (www.davidlynchfoundation.org) and Regnery History (www.regneryhistory.com), publisher of two books on Yellin.

Find out more at the film’s website is www.jerryslastmission.com.