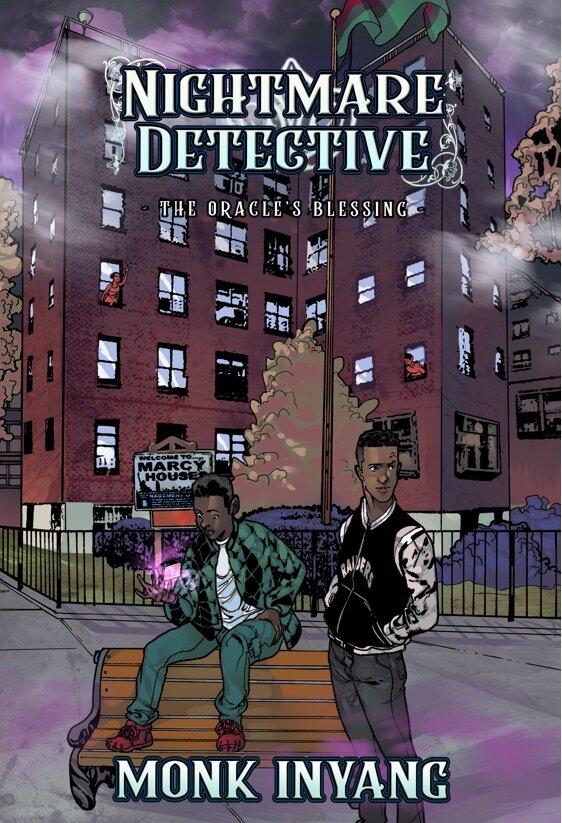 Montclair author Monk Inyang has just released his second middle grade novel, The Oracle’s Blessing. As a follow up to The Skeleton King, book 1 in the Nightmare Detective series, this second novel could have read like a simple bridge holding together a story arc, but it holds its own as it builds on the fantasy-world and characters we already know. The challenges for main character Uko and his friends become more complicated and solemn in both his waking life and dream life as he has adventures, navigates social obstacles, and becomes more self-confident and aware of the world(s) around him.

Summary: Uko Hill is starting his sixth grade year at a new school, Robeson Middle. On top of trying to get acquainted with his new classmates, he’s been charged with an incredible mission in Pangea – get rid of Chief and the Coyotes. In order to accomplish something that’s never been done in the dreamworld of Pangea, he will have to learn what it takes to be a true leader. He meets new characters in his travels and eventually gets the attention of the all-seeing Oracle herself – a woman so sought after, her whereabouts are unknown and constantly changing. Can he take the Nightmare Detectives to places they’ve never been before in order to reach his goal? There are people who believe he can. He just has to believe it himself. The Oracle’s Blessing is the second book in the Nightmare Detectives trilogy, a series that celebrates diversity and boundless imagination.

Inyang has an uncanny ability to create scenes that come across as both realistic and fantastical. And as with many middle grade novels, the characters feel older than their years as they are gripped by events that challenge them and force them to make huge, grown-up — even heroic — decisions. In contrast, Uko also experiences self-doubt and disappointment that will also feel all too familiar to readers. The novel, aimed at ages 9-12, is a readable, exciting journey book lovers of all ages.

The Oracle’s Blessing is available at Watchung Booksellers and on Monk Inyang’s website.

Baristanet recently spoke to Monk Inyang about his second novel and his writing process. See below for the interview.

Baristanet: Your second middle-grade novel, The Oracle’s Blessing, book 2 of the Nightmare Detective series, moves on seamlessly from the first book in the series, The Skeleton King. Did you start planning or writing this story as soon as The Skeleton King was complete?

Inyang: I had plans for the second book while I was finishing up the first. Since the first book took place in the summer between elementary and middle school, I knew the next chapter would ramp things up with Uko entering Robeson Middle. Middle school is a tricky stage where kids are in between the carefree, childish times of childhood and the weightier reality of being a preteen with more complex emotions and relationships. The plan was to have the second book explore that both in school and in Pangea.

Baristanet: The main character, Uko, values his friendships and family, but he doesn’t shy away from disagreements or “doing his own thing.” Why was it important to you to make sure he came across this way?

Inyang: I wanted to have a character that is an active participant in the world around him. Whether he’s making great decisions or not, I thought Uko should be independent enough to make them on his own.

Baristanet: Most of the “real life” events take place in Uko and his friend Manny’s middle school. From the first day, they have a mysterious quest to solve that involves a conspiracy web of teachers and supplies. What sets this apart from many middle school adventures is how believable it feels. Why did you want a “real life” quest for Uko to work on as well as his dreamworld adventures?

Inyang: For me, the fantasy that really resonates most are the stories that have a foothold in the everyday world. I thought it would be extremely interesting to see Uko deal with the drama and impact of a larger than life dreamworld while balancing real life difficulties. When I was deciding on the plot outside of Pangea, I aimed for something grounded in the everyday but grand enough to stand up to the spectacle of the Pangea story.

Baristanet: New, darker areas of the dreamworld Pangea are discovered during The Oracle’s Blessing including the Isle of the Dead and Yomi, a place where people languish in the dreamworld because they are in comas in our world. How do these areas reflect on the story and characters as a whole?

Inyang: I went back and forth on including those aspects when I first started working on the second book, but I thought about the younger readers who were introduced to this world with the original book two years ago. As they’re getting older, they’re being exposed to the darker aspects of our flawed world. Kids are learning about and dealing with death, disappointment, and sacrifice, and I wanted to reflect that in the story. Uko moves from a young Nightmare Detective eager and new to Pangea – to a wartime leader with the weight and duty that comes with that. His decisions have consequences and he has to grapple with how his moves affect people around him both in Pangea and out.

Baristanet: Uko is taken to visit the Oracle of Pangea during the novel, and the scene is reminiscent of The Matrix, where Neo visits The Oracle. And the otherworldly aspects reflect stories like the Narnia series, and even A Wrinkle in Time. What types of books and movies do you consider most influential on your writing?

Inyang: The book has several odes to the movies and books that I loved throughout the years. Seeing The Oracle portrayed as a middle aged black woman in The Matrix was a big deal for me when I first saw it. The character in the story is a big nod to her. There’s a scene with Uko and Brandon at a locker that’s an ode to a Tupac scene in the movie Juice. I did my best to give Pangea the sense of a world that existed long before Uko found it – the way it comes across in the Narnia series.  Even the love/hate sibling relationship between Femi and Uko is influenced by the relationship between Eddie and Laura Winslow on the TV show Family Matters. All writing is a gumbo full of different ingredients from things you like, arranged in a way that’s unique to you.

Baristanet: Uko goes through a lot of emotional disappointments during the novel. Despite a loving family and a solid group of friends, he feels lonely and abandoned at times. What do you hope readers will learn from Uko’s experience?

Inyang: Loneliness and feelings of abandonment are a staple of the human experience – even when things look good on paper or when people tell you that you’re very fortunate. When you’re stretching past your comfort zone, which Uko does a ton of in the story, you’re in for even more setbacks and negative experiences. But I want readers to identify with the benefits Uko experiences by pushing through that anyway. You wouldn’t appreciate the victories in life without the difficulties along the way.

Baristanet: The theme of self-awareness is consistent through both Nightmare Detective novels. One of the most affecting lines in The Oracle’s Blessing is “There are few things in this world that feel better than knowing your purpose.” Do you see Uko finding and “knowing” his purpose? How did this emerge as a theme in your writing?

Inyang: Yes, I think Uko discovers his purpose in Pangea and how he connects to the broader world as his mission against Chief and the Coyotes becomes clear. It emerged as a theme in my writing through conversations with adults who struggled with seeing the “point of it all.” It’s extremely difficult to get through each day when you feel like there isn’t something worthwhile to fight for. Whether it’s your belief, your family, or the impact you want to have – we all need something. And when it clicks for Uko, when he realizes why he’s going through all of this, I want the reader to feel the same relief that he feels in that moment.

Baristanet: I understand we should look forward to a third novel in the Nightmare Detective series. Can you give us a hint about where the story will go?

Inyang: I’m leaning towards setting the third and final novel a few years after the conclusion of events in the second story. I really enjoyed how The Handmaid’s Tale sequel The Testaments took place around 15 years after the original. I wouldn’t set it that far down the line, but I want to explore what happens after Pangea has time to be changed by the series of events that happen in book two.