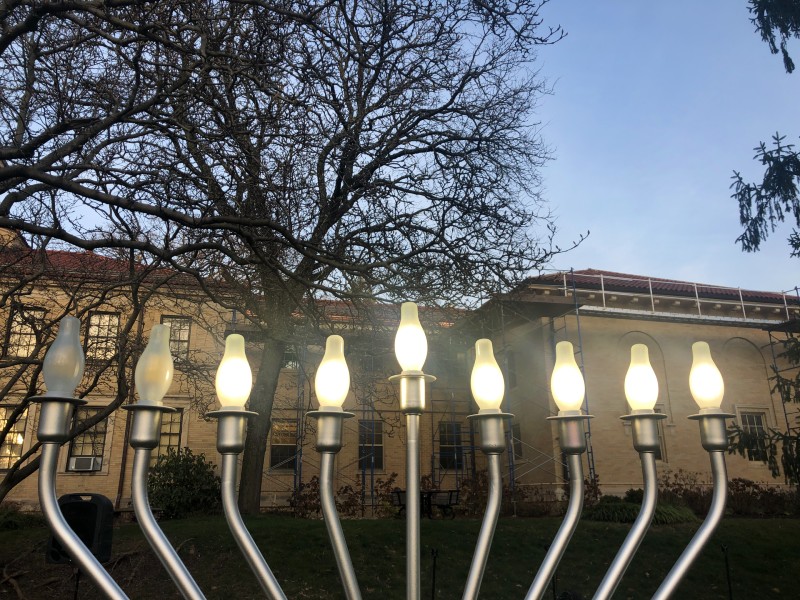 You could say it’s a Hanukkah miracle. And something good that happened in 2020. And that it’s about time.

The Borough of Glen Ridge had its very first ever Menorah lighting in front of Borough Hall on Tuesday, and it all happened in time for the sixth night of the Festival of Lights.

Here’s how a movement to bring a menorah to Glen Ridge that started back in July came together in less than a week.

Valerie Wilde Seiden, whose daughter Lila is part of Gas Lamp Players, received an email inviting Lila to sing a Christmas song for the tree lighting video. Seiden reached out to Gas Lamp’s Kristy Graves and Heather Ballantyne and explained how her family, being Jewish, felt excluded from this event, especially given that Glen Ridge had never displayed a menorah. Seiden added she would easily say yes if there was a Hanukkah song Lila could sing.

Seiden was overwhelmed when Graves and Ballantyne responded, asking Lila to take the lead on singing “Oh Hanukkah” (to the tune of Taylor Swift’s Shake it Off). Lila and friends sang the song and were part of the virtual tree lighting ceremony. Seiden shared her gratitude online, posting to a Glen Ridge Community Facebook page on the very first night of Hanukkah.

“For those of you who may be wondering how a little girl and other friends in our town ended up singing a Hanukkah song in the middle of the Christmas tree lighting this year, I have a heartwarming story for you,” Seiden wrote, explaining how Graves and Ballantyne offered her daughter “an opportunity to be a part of this beautiful town ceremony, in a way that would not only bring us so much joy to be a part of, but that would also feel authentic to us as Jews.”

“It’s not a menorah lighting, but it is a step towards a kinder, more inclusive place for our family,” Seiden added.

Seiden’s post garnered a huge response on Facebook, with many residents sharing an outpouring of support, and questioning why Glen Ridge did not have a menorah display, when so many neighboring towns do.

Seiden and others also learned that Lily Ratish, a 13-year-old Glen Ridge resident, had attended a virtual meeting of the Glen Ridge Borough Council in July 2020 to ask that a menorah be placed front of the Borough Hall.

Glen Ridge resident James Cordon said not having a menorah was unacceptable. Then, he volunteered immediately to buy one.

The menorah movement gained more momentum on Monday night, when Seiden and other Glen Ridge residents attended a Glen Ridge Borough council meeting, asking, as Ratish had, to place a menorah, specifically a six-foot one Cordon had quickly purchased on Amazon just days before, next to the municipal Christmas tree.

The council voted unanimously to approve the menorah. Seiden, who moved to Glen Ridge in 2012, was overjoyed.

“It was eye opening for me, the overwhelming support we had from everyone, especially non-Jewish people,” she says of the response on Facebook. “Strangers have now become friends.”

On Tuesday evening, Glen Ridge residents gathered in front of the menorah and virtually, on Facebook Live, for the historic lighting ceremony. Rabbi Marc Katz, of Temple Net Tamid, holding his baby girl, led the group in a candle-lighting prayer.

“This town menorah is a symbol of inclusion to our ever-changing and growing town. Let the lights glow and inspire us all.” 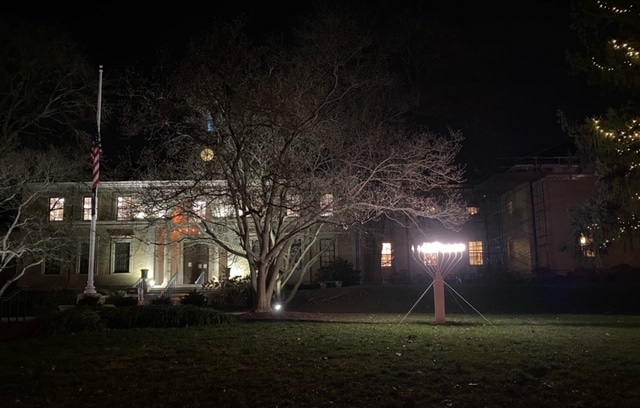