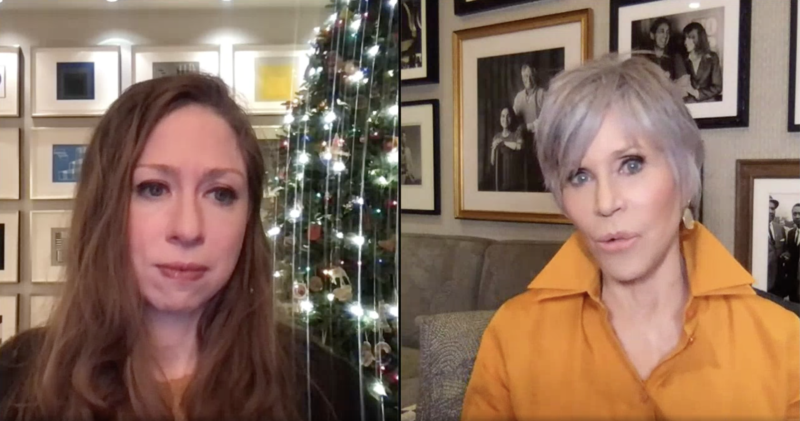 Even at 82 Jane Fonda is making waves.

The two-time Oscar winner, political activist and workout guru has taken to the streets and penned a book on climate change. She chatted about her work with Chelsea Clinton in a Zoomcast for the Montclair Literary Festival.

Fonda recently wrote What Can I Do? The book summarizes her experiences as a climate activist, details conversations with climate scientists and explains how issues such as water, migration, and human rights factor into the crisis. It includes steps readers can take to address climate change.

Fonda told Clinton she was inspired by the work of Greta Thunberg, Swedish climate activist and Naomi Klein, who wrote On Fire: The (Burning) Case for a Green New Deal.

In October of 2019 Fonda moved to Washington, DC and joined forces with Greenpeace to help lead events on Capitol Hill to bring more attention to climate change. Those weekly protests, known as Fire Drill Fridays, aim to draw diverse, and high profile participants to raise awareness and exert public pressure.

“My book is a way to extend what we did in DC,” says Fonda.

Women are mobilizing to stop the crisis, says Fonda.

“That’s why I think women show up [to Fire Drill Fridays]. We’re connected to the earth and we fight for the things we love. Two-thirds of the women at our rallies are older women. Firedrill Fridays are for older ladies who want to get their toe in. It offers them something that feels right for them.”

Clinton asked Fonda what can people do to advance the fight against climate change.

“Look at your credit cards,” said Fonda. “Chase, Wells Fargo and Union Bank fund carbon infrastructure. Cut up your credit cards from those banks. Send a photo of that to the bank’s president. Stop the money pipeline. Fossil fuels are the number one bad guys.”

After talking about her work on climate change, Fonda answered questions sent by viewers about her personality, her friendship with Lily Tomlin and what’s next for “Grace and Frankie,” the critically acclaimed series she stars in with Tomlin.

One viewer wanted to know what attributes shaped her. “Resilience, you can survive almost anything if you’re resilient,” said Fonda. “I’m brave. Over the years I became brave. I take leaps of faith. They can take you to places you’ll learn from and make you stronger. I’m a perpetual student, always learning.”

Fonda spoke about how she met acting partner Lily Tomlin. “I never saw Lily until the late 70s where she played about 25 characters. I fell in love with her. She cracks me up. She’s always game. She’ll come to rallies and get arrested.”

Fonda vowed to keep fighting. “We don’t shoot Frankie and Johnny until June 2021, so I have a lot of time to raise a ruckus.”