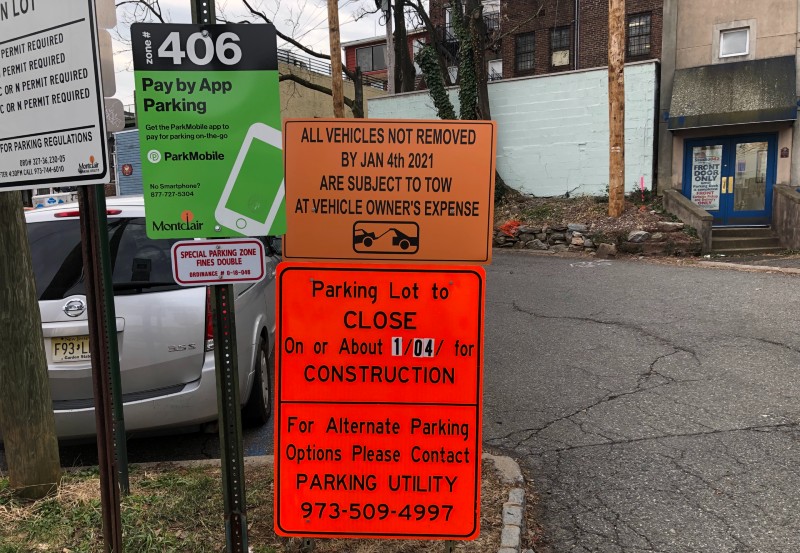 When Montclair announced on December 24th that it would be closing the Midtown Parking Lot on January 4, the news, coming on Christmas Eve, was like The Grinch Who Stole Parking for Montclair business owners already struggling with a pandemic and previous parking lot closures.

Craig Cornell of Diamond Cycle, located on Bloomfield Avenue, said the news, in the midst of the holiday season, left him scrambling to get some answers.

“Why are we just finding out about this now and why has no one from the town come to businesses to talk about a plan and find out what we need,” asks Cornell, who says his business has received nothing in writing from the Township.

What Cornell is learning about the Midtown Lot closure has left him very concerned, not only for his ability to do business, but for the safety of his customers, who had previously been able to park in the Midtown Lot or unload bikes in of the store’s three rear spots — spots that will soon be inaccessible, as will the alley way from the lot to Bloomfield Avenue.

“It’s very difficult and dangerous to load and unload bicycles on Bloomfield Avenue. I believe someone is going to get hurt,” says Cornell who also worries that the closure of the parking lot will force customers, including children, to ride their bikes along busy Bloomfield Avenue in order to reach the store.

Cornell also has no idea how the shop will handle bike deliveries to the store.

Montclair closed the South Fullerton East Lot and South Willow parking lots in 2018 and at that time, offered the Midtown Lot among the alternative parking facilities.

The businesses adjacent to the Midtown lot have spent the last two years across the street from a construction zone — the Seymour Mixed Used Arts District. Now they will be enduring construction behind their businesses for another year. Studio 42, Greenleaf Cafe, Trend Coffee House and Fume Cigar Shop are just some of the businesses affected.

Dr. Liz Houston of Cameron Animal Hospital says those earlier parking lot closures already dealt a blow to the hospital. She was surprised to learn the Midtown Lot would be closing without any other facilities being brought back online to replace the lost parking spots.

“I thought this was a phased project, and that although we had to suffer the closing of South Fullerton and South Willow, we were given the impression that construction on the Midtown Lot would not start until new parking decks opened,” says Houston.

“COVID has thrown every small business everywhere for a loop and to get this on top of it, it has been a really scary couple days,” says Houston.

Houston is especially concerned that people bringing sick pets to the hospital will have to walk a heavy cat in a carrier or try to carry a nervous dog all the way from the YMCA or Crescent Parking lots to her Bloomfield Avenue location.

“I don’t know how the town can make decisions that let developers sit with two empty parking lots and let more small businesses struggle or close,” she said.

Houston wonders why the town could not arrange for parking spots in the new decks, at municipal rates, until the Midtown Lot is completed.

Another concern Bloomfield Avenue businesses have is the handling of garbage and recycling. Without access to the rear of their businesses that face the closed lot, they will have to place garbage and recycling in front on Bloomfield Avenue. They are concerned about the dumpsters becoming an eyesore, blocking the view of stores, creating unpleasant odors, and of course, taking up more parking.

Cornell would like the Township to consider allowing for one large rear dumpster for all the businesses accessible by a walkway. The walkway could lead from Glenridge Avenue to the alley that provides access to Bloomfield Avenue, allowing pedestrians to access businesses if they park on Forest or Glenridge Avenue outside of the closed lot.

Both Cornell and Houston said they had been in touch with Montclair Center BID Director Jason Gleason and Councilor at Large Peter Yacobellis.

“I’m working with the Business Improvement District (BID) and Township leaders to make sure the right individuals for each of the affected businesses are contacted with the information they need to make decisions,” says Yacobellis. “This project has of course been in the works for several years but understandably the immediacy of it results in a lot of real-time concerns and questions. It’s clear to me that our township staff has been weighing every question and scenario to come up with solutions. I would ask residents to give extra consideration to these businesses when deciding where to spend their money, knowing all of the headwinds they’re up against.”

Dmitri Banjansk, owner of Trend Coffee & Tea House, wants to be optimistic but his primary concern is how this closure will affect foot traffic to his and other neighboring businesses.

“Yes, the parking lot closing will be difficult for us. It will be hard to park and load and unload supplies for the business. And not having the parking lot for our customers will be hard. And having garbage containers in front will look ugly. But when you wrap all these details up, the inconvenience is number two. The number one thing I’m concerned about is that business revenue will suffer,” says Banjansk, adding that the foot traffic from people walking through the alley from the lot to Bloomfield Avenue normally brings a lot of customers to his business.

Having customers not able to park in the lot or walk from Glenridge Avenue through the alley to Bloomfield Avenue and then having parking spots in front taken up by dumpsters, and then adding all of that to dealing with COVID-19 restrictions, says Banjansk, is a lot for any business to handle.

He also wants to know how the Township expected businesses to be ready to completely change their operations by January 4, when they were only notified at the end of December.

“Right now, you know as much as I know and that’s not right. This is a big project and the Township is still working out the details. We should have known at the beginning of the month so we could be ready.”