December 23, 2020 (Bellevue Avenue): The complainant reported that an unknown person threw a large rock through the rear windshield of his vehicle, causing it to shatter.

January 2, 2021 (North Willow Street): The complainant reported that she parked her vehicle and upon returning to it observed that the rear windshield was shattered. It is unknown what caused the damage.

December 23, 2020 (Bloomfield Avenue): Two juvenile victims reported that while walking east on Bloomfield Avenue in the area of Maple Avenue they were approached from behind by a group of 6 individuals. One of the members of the group stated that he had a weapon (one was never shown) and demanded they turn over their belongings. One victim turned over an orange bag containing sunglasses. The group then fled on foot west. One suspect was described as a juvenile male, approximately 5’1” – 6’2” tall, wearing a dark jacket and dark pants with tears in the thighs.

December 23, 2020 (Bloomfield Avenue): An employee of Faraj Enterprise reported that while assisting another customer, an unknown male stole an Apple iPhone 12 from a display case. The suspect had previously been inquiring about the phone.

December 25, 2020 (Bloomfield Avenue): An employee of the Exxon Gas Station reported that an unknown person stole an undetermined amount of proceeds from the store. He was described as a black male, approximately 35-45 years old, wearing all black clothing.

December 31, 2020 (Watchung Avenue): The resident reported that his 20128 black Acura RDX was stolen from his driveway during the overnight hours. The vehicle was reportedly left unlocked with the key fob in the center console. The vehicle was recovered on January 2, 2021 in Bayonne, NJ. Four juveniles were charged with Receiving Stolen Property by Bayonne Police.

December 31, 2020 (Valley Road): The CVS manager reported that wile reviewing surveillance video for a separate incident, he observed a male and two females enter the store. The male proceeds to the contraceptive aisle where he steals a box of condoms. The suspect, male, had “messy” brown hair and was wearing a white hooded sweatshirt (no markings), black jacket, dark colored pants, dark colored shoes, and a green “Nike” drawstring bag.

December 31, 2020 (Valley Road): The manager of CVS Pharmacy reported that he observed an unknown male enter the store and proceed to the allergy medication aisle. The suspect pulled a black backpack he had been concealing and filled it with medications from three different aisles. A majority of the items taken were pain medications, dental products, and allergy medication.
The total value of proceeds stolen was approximately $10,000. The suspect, male, was wearing a blue face mask, a black beanie hat, black jacket, and a white hooded sweatshirt. The incident is under investigation.

January 2, 2021 (South Fullerton Avenue): An employee of Bangz Salon reported that a set of her personally owned hair cutting shears were stolen from her work station. The shears were valued at approximately $3,000.00.

January 4, 2021 (Undercliff Road): A 2018 Range Rover was stolen from the driveway of the residence during the overnight hours. It was recovered later that day parked and unoccupied in Newark.

December 30, 2020 (Cedar Avenue): The complainant reported that he was inside Nishuane Park at approximately 1:30 AM when he was “jumped” by a group of five individuals. The victim sought medical attention on his own for injuries to his face.

December 28, 2020 (Bloomfield Avenue): Two vehicles parked inside of a Bloomfield Avenue parking garage were entered between 9:30 AM and noon. An iPhone and approximately $900.00 in tools were taken from one vehicle.

January 3, 2021 (Gates Avenue): The victim reported that her vehicle was entered overnight and was rummaged through. Missing is a handicap placard and a cellphone charger.

January 4, 2020 (Plymouth Street): The complainant reported that two cars were parked in his driveway overnight. One vehicle, which was left unlocked, was entered. Approximately $20.00 in cash was taken.

January 4, 2021 (Plymouth Street): The complainant reported that her vehicle was entered between 1/3/2021 and 1/4/2021. The center console was rummaged through. It is unknown if anything is missing. 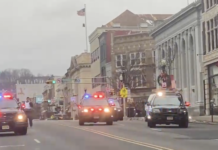