CBS News reported on the conflict over whether to return to in-person learning, speaking with MEA President Petal Robertson as well as parents. Ponds reiterated his stance, both to CBS, and to parents on Wednesday’s BOE call, that it is his plan to open schools for in-person learning on Monday, January 25 for students in kindergarten through 5th grade. 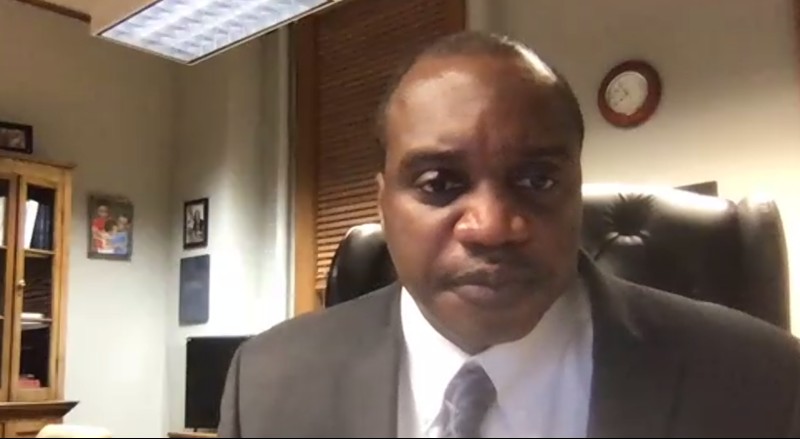 Dr. Ponds, at the beginning of Wednesday’s BOE meeting, asked Building and Grounds director Anthony Bispo to provide an update to HVAC issues and chemicals being used in district. Bispo reported that all the air purifiers that were purchased had been received and dispatched to the schools where appropriate. Bispo said windows are to be utilized, to provide fresh air in rooms without mechanical systems in conjunction with the air purifiers. He also stated that the district had repaired over 250 different mechanical systems and had an approved contract to begin its midterm remediation projects.

Bispo said that all the cleaning products utilized by the district are green seal, EPA and National Sanitation Foundation registered. In addition to the traditional custodial equipment, Bispo said the district has purchased cold foggers and freestanding thermal foggers and said staff has been trained on the use of that equipment.

“When a school needs to be sanitized due to a positive COVID test, we are appropriately using those pieces of equipment, the cold foggers and the thermal fogger,” said Bispo, adding that the district has taken steps to ensure staff are using these products correctly, and with a full compliment of PPE — gloves, protective suits, mask goggles, full face respirators.

In his superintendent’s report, Dr. Ponds said the principals of all the schools have designed how the students are going to come in and have directional arrows and other identifiers to maintain social distancing while they wait to enter the building. All students will participate in a screening that will include a temperature check.

“We are working constantly and continually to make our own midterm and longterm fixes happen. We do not have the luxury of all our buildings having mechanical ventilation. When that’s not in place, as I stated before, we will have windows open and air purifiers.”

“I support my team and the work they’ve done,” Dr. Ponds continued. “I am open to having more conversations with our association to get us in our buildings. I look forward to that conversation happening. It’s important for me to make it clear tonight that we need to get our children back and I’m willing to work as hard as I can with anybody who going to work with me to get it done.”

Dr. Ponds responded to questions raised by the MEA regarding the previous postponements of in-person learning due to rising COVID-19 cases.

“We did anticipate a bump [in cases]. We anticipated a holiday bump that everyone talked about that was going to happen during Thanksgiving and Christmas. And we saw that bump happen. Now we’re anticipating it to go down,” said Dr. Ponds, mentioning a decline being reported in the news. “Our principals are working hard with their pandemic response teams to make sure any questions that are there should be answered. I put that task on our principals and they are actually doing that work. We have answered over 400-500 questions, and we are continuing to have an open dialogue to get things done.”.

During public comment, the strained relationship between Montclair teachers and Montclair Public Schools Superintendent Dr. Jonathan Ponds became evident. There was disagreement about a recent professional development training day. MEA members maintained that the training had always been scheduled as a virtual day for teachers, while Ponds stated teachers were supposed to be in the school buildings on that day, in order to practice the skill set the department had put together for teachers.

And although many of the concerns raised regarding remote learning were by parents of younger children, Genesis Whitlock, a Montclair High School student and student representative to the Montclair Board of Education, shared in her report, how continued remote learning is affecting high school students.

“I want to congratulate all students who have been able to provide online learning throughout the semester, because it’s not easy,” Whitlock said, adding that although some students have managed to find positive aspects of remote learning, may were struggling.

“There are some real disparities that have been further exacerbated and it’s important that these concerns are addressed and acknowledged because, unfortunately we won’t be able to see them unless they’re brought to the front,” said Whitlock, adding that she has seen a huge drop in engagement at club meetings and student dialogues she facilitates.

“Honestly, it’s understandable, but we cannot honor the words of Dr. King and fight against anti-racism. We cannot support survivors and talk about misogyny. We can’t move forward if we are not well,” she said. Whitlock said she will hold another student dialogue on Sunday at 6:00 p.m., to talk about moving forward; how students can support each other and what support students may need from the district to be able to move forward.

Numerous teachers spoke during public comment, expressing that they believed returning to the buildings would be unsafe and unhealthy. They called for honest, transparent disclosure of repairs and COVID-19 plans in the buildings, adding that their questions have gone unanswered.

Teachers cited being disrespected and publicly shamed on social media for calling for remote instruction to continue. They mentioned attending virtual funerals for friends who have died from COVID-19 and expressed their fear of more lives lost due to rising cases. They questioned what they should do if they are cold while teaching with windows wide open in freezing weather. They asked why new COVID-19 cases at Hillside, Buzz Aldrin and Montclair High School have not been posted to the district’s website or communicated by email.

One teacher asked Dr. Ponds: “How is it alright for 70 of us to be in a building at Hillside, but the 10 of you cannot be in a room together to have a Board of Education meeting. Do you feel as if your lives are more important than those of students?”

Another teacher stated that teachers are being denied the opportunity to participate fully and equitably in this process, citing a lack of consistent collaboration and consent based decision making.

Some 90 people signed up to speak during the public comment portion of Wednesday’s Montclair Board of Education with public comment lasting until just before midnight.

“My brain is rotten after Zoom, said Connor, a kindergartner. He was joined by parents who explained how remote learning was not working for their children.

A 7th grader, who missed being able to interact with friends, described remote school as boring and not engaging.

Many parents who came to the virtual podium repeated a similar call for a return to in person learning, requesting that Dr. Ponds and the Board of Education uphold their decision for opening Montclair Schools on the 25th, citing Dr. Fauci and the American Academy of Pediatrics believe schools should reopen for well being of children.

Others were more specific, sharing how their children had cried every day since remote learning started 10 months ago and sharing the negative impact it had on families.

Adam Schrager said he has not worked since March, because his young children need him home to provide help with remote school.

Many parents thanked teachers in their remarks and acknowledged how hard they were working to teach children remotely, but also urged them to return to in person learning. Others expressed frustration and anger with Montclair Education Association.

“The MEA’s campaign to keep schools close is in no way, shape or form in the best interest of the children of Montclair,” said Montclair parent Daryn Sirota. “I would go so far as to say it is an infringement on their basic constitutional rights. Students can play winter sports within the same school buildings that the MEA wants closed to them for learning. Restaurants and bars are open for business…indoor play spaces, gymnastics studio, gyms, preschools, daycares, private schools, the majority of New Jersey public schools all have their doors open. My daughter’s non-unionized teachers have proudly been teaching in the classroom since September. Non-unionized workers have been overseeing virtual learning at the YMCA and the Wally Choice center in Glenfield park. If these learning centers are open, why aren’t Montclair schools?”

Some parents expressed how disheartened they were by the situation and how it was affecting the community.

“I am concerned about the demonization of our neighbors, our teachers, the MEA, which is made up of individuals who are teachers and staff,” said Renaissance parent Kristin Wald. “I’m also very concerned about some of the inconsistent and confusing information families have received from the district. And from what I understand, staff are also not receiving clear guidance. Some of this is understandable because we’re in a global pandemic, but it promotes anxiety, confusion, and sadly distrust between stakeholders. One example of this is that back in November, families were told that hybrid learning would be postponed by the superintendent, not by the teachers, due to community spread. Our region was at orange or high for COVID as per the superintendent updates. And in December we were told the same thing that we had too high of a level of COVID spread to go back. And that was from the superintendent, not from the MEA. Our region is still at orange and high, and the rate of transmission is still over one. So I’m not sure as to what has changed?

“Our teachers are being called horrible things in public forums. They feel put upon and due to opaque communication, they are being blamed for the lack of information and changing plans. Ad their children attend school with ours. These are our neighbors. These are people that we see every day and it’s really harmful to all of us.”