Montclair, NJ – St. Cassian Parish had planned to celebrate 125 years of service to the Montclair community in September, 2020. Then the pandemic interrupted. But the Parish’s commitment to supporting at least one beneficiary of the anniversary fundraising remained; the parish would fund a new Pediatric Health and Nutrition Center, a project of the Lamp for Haiti, co-founded by James Morgan, M.D., a long time member of St Cassian.

The nutrition center will be the most recent addition to the Lamp’s health center in Bwa Nef, a neighborhood of Cité Soleil, an urban shanty town in Port Au Prince, Haiti. Since 2006, Lamp for Haiti has offered essentially free medical care to the residents of the poorest area of the poorest country in the Western Hemisphere. Staffed by Haitian doctors, nurses, technicians, and community health workers, the clinic sees adults and children whose health problems and food insecurity have been exacerbated by the pandemic and the global economic downturn.

Early last September, pastor Rev. Marc A. Vicari told his parishioners that, “Instead of using this year to build our financial legacy, I am asking the Parish to support and fund Dr. Morgan’s initiative in bringing a nutrition center to Port-Au-Prince, Haiti.”

Father Marc had approached Dr. Morgan the previous summer as plans for the anniversary were just getting started. Envisioning three separate fundraisers for the whole anniversary year, he said one would be for a project outside the parish. Dr. Morgan recalled Father Marc suggested there was no better way to be thankful for the longevity of the Parish than to help save the lives of children who might otherwise starve.

Dr. Morgan’s proposal for $40,000 to fund the building and staffing of the St. Cassian Pediatric Health and Nutrition Center was fully funded this Fall, just as the anniversary celebrations would have started.

“Never, in my wildest dreams, could I have envisioned that we would get the entire project funded, despite the pandemic,” Dr. Morgan said. 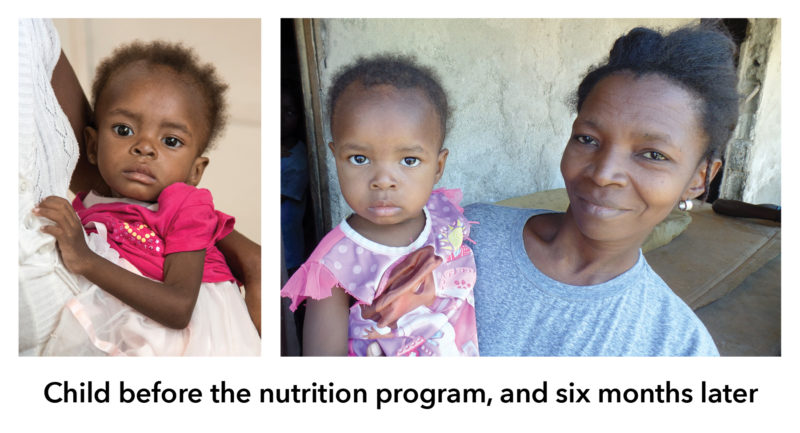 Currently, one in five Haitian children is undernourished; one in 10 is acutely malnourished. One in 14 will die before reaching the age of five. These are the Lamp’s patients; providing an expanded nutrition support program will go a long way to ensuring that these children will reach adulthood.

The Lamp broke ground for construction of the new center in December. Dr. Morgan expects to have it fully functioning by Spring 2021. To the people of the church and their pastor, he expressed profound gratitude.

“My heartfelt thanks to the people of the Parish on behalf of the children of Bwa Nef who will be made whole by their generosity.”