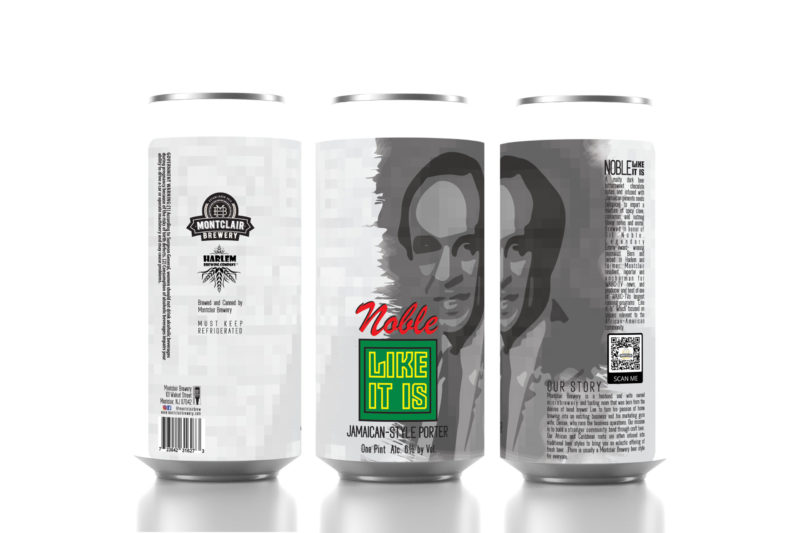 Montclair, NJ – In honor of February’s Black History Month, Montclair Brewery has collaborated with the Harlem Brewing Company to release the Noble Like It Is porter brewed in honor of Gil Noble, former Harlem, New York and Montclair, New Jersey resident and iconic African American journalist. This beer is part of Montclair Brewery’s 3rd annual Black History Month Beer Series, which includes various beer styles that are connected to the African diaspora and/or honors Black History makers. The Noble Like It Is Porter will be available on draft early February and will be available in cans on February 13th. View a recorded discussion with both breweries and Gil Noble’s son, Chris here:

The new brew, named Noble Like It Is, is a porter brewed with Jamaican pimento seeds, also known as allspice. The was developed to honor Noble’s Jamaican roots, as both of his parents were from Jamaica. Pimento seeds are one of the most important and widely used ingredients on the island and used in a variety of stews and drinks. “We decided to create a porter,” recalls Montclair Brewery lead brewer and co-owner, Leo Sawadogo, “because porters and stouts are the most popular beers in Jamaica, after Red Stripe and we wanted to make that connection to his Jamaican roots which he cherished.”

“It is very important that his legacy is remembered and celebrated now and for generations to come,” said Celeste Beatty, founder of Harlem Brewing Company.

“Celeste and I have been wanting to do a collaboration for a while now,” said Denise Ford Sawadogo, general manager and co-owner of Montclair Brewery. “When I learned that Gil Noble was from Harlem, I knew that this was the project to collaborate with Harlem Brewing Co.”

Noble was a renowned journalist, professor, author, artist, pianist, news reporter, anchor, producer and host of “Like it Is” a weekly television program that focused on issues relevant to the African American community. He interviewed many distinguished people, such as Nelson Mandela, Mohammed Ali and Bob Marley. He was a 45-year resident of Montclair and taught media classes at various New Jersey schools, such as Saint Peter’s University, Seton Hall and New Jersey City University.

”My father was a highly skilled journalist but what made him unique was his dedication and connection to the black community and his commitment to tell the truth about our story,” said Chris Noble, son of Gil Noble. “He knew that what we know about our history and ourselves influences how we think about ourselves and others, and also affects what we can accomplish in our lives. For over four decades, my father was committed to research, writing, teaching and producing programs and documentaries on “Like it Is” to tell the truth about our history and culture. He told me on many occasions that “misinformation is a weapon of mass destruction”, so he used his platform to give us the truth and considered “Like it Is” a doorway to information and knowledge. I am very happy that two black-owned breweries have decided to honor his legacy with the Noble Like It Is beer.”

This brew is one of three new releases that are included in Montclair Brewery’s Black History Month Series. The brewery is also adding a Boseman Wild Ale, which is brewed with juniper berries, to honor Chadwick Boseman. Boseman is a famous African American actor who is most known for his starring role in The Black Panther. This brew will be available towards the middle of February. Another new addition is their Black is Beautiful Stout with Peanut Butter. This is a new twist on their version of the Black is Beautiful brew. Peanut butter was selected as a homage to George Washington Carver, the African American agricultural scientist and inventor. He is often referred to as the “peanut man” for developing more than 300 food, industrial and commercial products from peanuts. This beer will be available on draft and in 16 oz growlers.