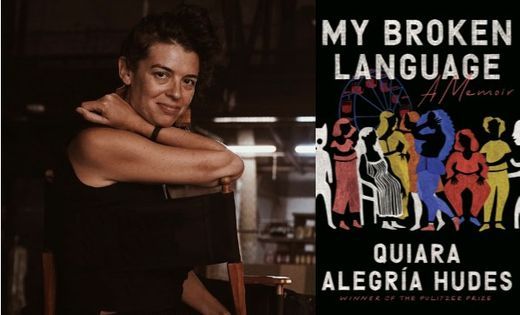 Hudes will be talking about her memoir, “My Broken Language.” This will be the sixth event for the Winter/Spring 2021 season of Open Book / Open Mind Online, the live webcast version of MPL’s popular, long-running literary conversation series. After the discussion, audience members will participate in a virtual Q&A session with the author.

Quiara Alegría Hudes describes herself as “a playwright, wife and mother of two, barrio feminist and native of West Philly.” Best known for writing the book for the musical “In the Heights,” with Lin-Manuel Miranda, which is about to be released as a feature film in June, Hudes’s other plays and musicals are also famous for their exuberance, intellectual rigor, and rich imagination, and have been performed around the world, including: Water By the Spoonful, which won the Pulitzer Prize for Drama and “Elliot, A Soldier’s Fugue,” another Pulitzer finalist. She recently founded a crowd-sourced testimonial project, “Emancipated Stories,” that seeks to put a personal face on mass incarceration by having inmates share one page of their life story with the world.

“My Broken Language” will be published on April 6, 2021 and has already garnered glowing reviews:

“Quiara Alegría Hudes is in her own league. Her sentences will take your breath away. How lucky we are to have her telling our stories.”

“[An] astonishing debut memoir. Chronicling her childhood in North Philadelphia, with a Jewish father and Boricua mother, and her early career as a playwright, [Hudes] exposes chasms around identity and builds bridges between her selves as Boricua, mixed race, composer, writer, and observer….This heartfelt, glorious exploration of identity and authorship will be a welcome addition to the literature of Latinx lives.”—Publishers Weekly

Elena Martínez has been a folklorist at City Lore in New York City since 1997 and is also the co-artistic director of the Bronx Music Heritage Center. She co-produced the documentary, “From Mambo to Hip Hop: A South Bronx Tale,” which aired on PBS in 2006 and won the National Council of La Raza’s 2007 ALMA Award for Best TV Documentary. She is also a producer for the documentary, “We Like It Like That: The Story of Latin Boogaloo” which premiered at the SXSW Festival. Elena curated the traveling exhibitions, “¡Que bonita bandera!: The Puerto Rican Flag as Folk Art” and “Las Tres Hermanas: Art & Activism.”