Murphy urged that through behavior, New Jersey can change the trajectory of the models and added that hospital metrics remain the greatest indicators of our on-the-ground realities. 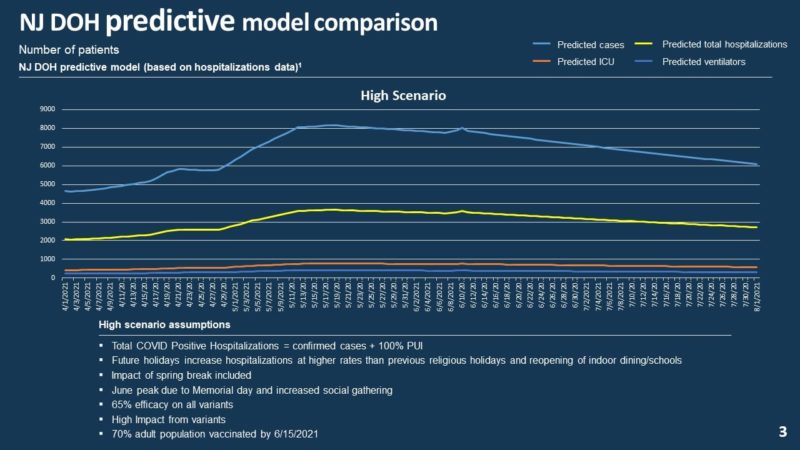 The high case model predicts the vaccination program continues at its current pace, but vaccines only ultimately prove 65% effective against all variants. It also accounts for people lowering their guard with the warmer weather and assumes a rate of hospitalizations from holidays and reopenings above has been seen in the past.

Under the High Case Model, New Jersey would hit a high in new cases of more than 8,000 daily in mid-May and again in mid-June.

Hospitalizations would settle into a range of 3,500 from mid-May into mid-June putting the state basically back to where things were in December and January.

“Remember, these are models, not certainties,” Murphy said. “We can change models through our behavior. I know you’re all up to the task. We can push through our fatigue and refocus.”

If New Jersey is able to change the model, the more moderate scenario would likely occur. 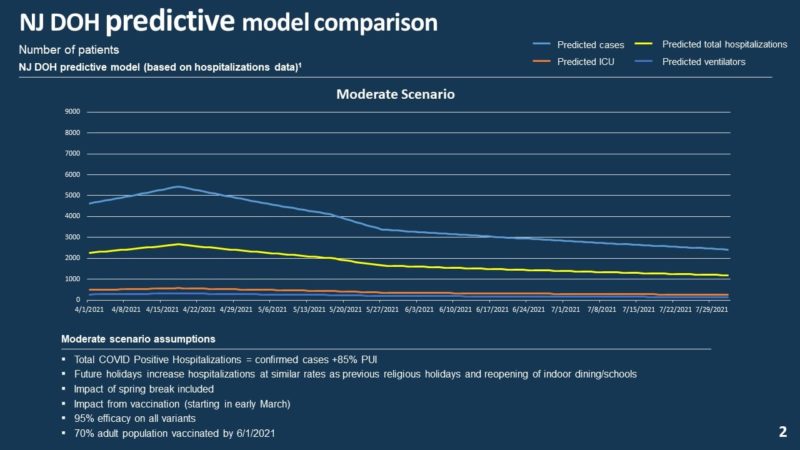 MODERATE CASE MODEL:
A moderate case model assumes the number of new hospitalizations follows the rates seen after past religious holidays and expansions of indoor activities. It also takes into account expected increases in vaccinations, and assumes vaccines average 95% efficacy against all variants of the virus.

Murphy said that under the Moderate Case Model, New Jersey would reach a daily high of 5,445 new cases on April 18th and also hit a high of total hospitalizations on April 18th. This model predicts new cases would not drop below 3,000 daily until mid-June at earliest.