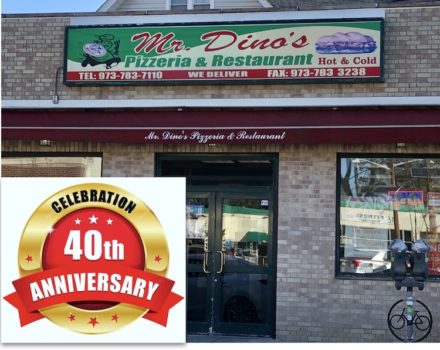 After 40 years, Mr. Dino’s Pizzeria, and owners Angelo and Pasquale Loconsole, deserve a celebration for not just surviving but thriving while serving local customers and weathering Montclair’s difficult year. The crew at Mr. Dino’s would love to throw the biggest, most delicious, pizza-laden party the town has seen. But: Global Pandemic. Even so, the four decade milestone will be celebrated, if not with the same crowds and group fanfare originally hoped.

A great many Montclair-area residents have warm and tasty memories dating back to Mr. Dino’s first location on the corner of North Fullerton and Watchung. The jukeboxes and wooden bucket seats in the original pizzeria had stories to tell of family joys and drama, teenagers planning parties, and Mr. Dino’s patriarch, Nicola Lonconsole, peeling potatoes and bossing his sons Angelo and Pasquale around the pizzeria.

The Watchung Plaza staple has always been a place for families to share meals and quality time. Myriad preschoolers have asked, “Which man is Mr. Dino?” when their parents picked up slices, often cut into toddler-friendly, bite-sized nibbles. And while the only “Mr. Dino” is the name on the front sign (and perhaps the ceramic chef on the counter), the story of how Mr. Dino’s has lasted for four decades in Montclair has its own set of characters.

In 1981, brothers Pasquale and Angelo Loconsole left Bensonhurst, Brooklyn and crossed the Verrazano Bridge heading for New Jersey. They’d heard about another set of brothers who wanted to sell their pizzeria in Montclair, and on a whim they decided to check it out. With the youth and vigor of 18 and 23 years, they pulled into town and asked the first guy they saw how to find Watchung Avenue. That man, a Mr. Dino’s customer to this day, directed them to the corner of North Fullerton and Watchung Avenue. And so it began.

Together with their father, Nicola, the brothers worked 16 hour days, commuting back-and-forth from Brooklyn for 15 years. Despite the punishing schedule and commute, Pasquale sometimes found time to visit Montclair State University (when it was still called College) to attend parties. He’d often arrive bearing pizzas for students and police officers. It was the blizzard of ’96, and the six-hour drive home (and then back again) in the snow, that finally convinced the family to pull up stakes and make New Jersey home.

In addition to the brothers and their father, Loconsole cousins Pat and Nick have been working at Mr. Dino’s since they were in middle school. Two more cousins also worked at the pizzeria until they left for college. There has always been family behind the counter and in the seats. What do the owners order when they’re hungry? Pasquale’s favorite is the homemade eggplant, and Angelo loves the ever popular Grandma Slice, made from their own cooked marinara recipe.

Over the decades, including a move across Watchung Avenue, Mr. Dino’s has become a staple for countless families and residents with its Sicilian pies, award-winning pepperoni slices (large pepperoni only!), and plentiful garlic knots. And just like Angelo, customers just can’t get enough those Grandma Slices! At Mr. Dino’s, they say: “There are four ingredients: the dough, the sauce, the cheese, and the hands that make it.”

But for many Mr. Dino’s customers, another important ingredient is the family itself and the welcoming, homey atmosphere they created.

Brian Fleischer remembers his family spending almost every Sunday evening sharing a large pie and a liter of soda. It’s a tradition that continues to today.

“As an adult, decades later, Mr. Dino’s is still my family’s go-to pizza place,” says Fleischer. “I can’t count the number of times we’ve headed over to Mr. Dino’s with the kids only to bump into my parents and gather all three generations around the table.”

Deirdre Birmingham’s family has had a similar experience. “We have an amazing and fun tradition of my two sisters, our spouses, my parents, and all of the kids meeting at Mr. Dino’s twice a month on Friday nights. There are 14 of us, and we’ve been doing it for years. Three generations of Irish enjoying pizza, gelato, and the Mr. Dino’s crew. We’ve definitely missed it during this time.”

Carissa Olivi grew up with Mr. Dino’s. “I used to work across the street at the Plaza Shoppe when I was in high school. Dino’s was on the corner where Koreander is now. My friend was the delivery guy, and he would find out all the parties going on in town while he was out making the deliveries. It was the same set of brothers all the way back then! They were as friendly as they are now. Always okay with us hanging out in there.”

Tessa Vining’s Italian parents brought their children there for the cultural connection, the comfort, and the food, so Mr. Dino’s was a big part of Tessa’s childhood.

“I left Montclair when I was 18 only to return with a family of my own when I was 40,” says Vining. “The first time I went back to Mr. Dino’s, they were like, ‘Hey, how are you doing? How is your dad?’ I have to say, I was pretty surprised that they remembered me and remembered my dad. It was really nice. It made me feel like I was home.”

And it’s not just long-time residents who form connections with Mr. Dino’s. Marcy Dermansky says, “Mr. Dino’s has been a small, happy place in our Montclair existence for the last four years. With so many play dates that turn into dinners, my daughter and I often find ourselves walking down the street and getting slices for everyone. Being able to do this during COVID has been more important than ever, and I am grateful for them.”

A Difficult Year, A Supportive Community

Besides almost leaving Montclair, and then moving across Watchung Avenue when confronted with a threatened rent increase in the original location, this past year of the pandemic has definitely been the most difficult for the Mr. Dino’s family. In addition to the obvious COVID-19 challenges that have shut down so many restaurants and stores, there have been personal hardships as well. The Loconsole family, like so many other area residents, has lost family members this past year. And like so many others, they had to find ways to grieve and continue on without the usual supportive outlets for sympathy and grief.

Still, Montclair-area residents have been consistent in their support and appreciation for the comfort food and community Mr. Dino’s provides — even through their take-out window instead of over the counter. Days like Halloween and Super Bowl Sunday still had mountains of folded pizza boxes waiting to be filled and delivered. Lines of teens and families still snake down the block on weekend evenings, waiting for slices and pies — don’t forget the knots! And over the past year, as workers at home and back in their places of business looked for lunch, Mr. Dino’s subs and slices provided a familiar satisfaction and comfort in a time of upheaval. The support has been uplifting and heartwarming for the Mr. Dino’s family.

With the recent vote of confidence as Montclair Magazine’s Favorite Place for Pizza, Mr. Dino’s Pizzeria will surely continue as a mainstay in local families and visitors for years to come. Make sure to keep up with the Mr. Dino’s accounts on Facebook and Instagram for details about their 40th Anniversary Specials.