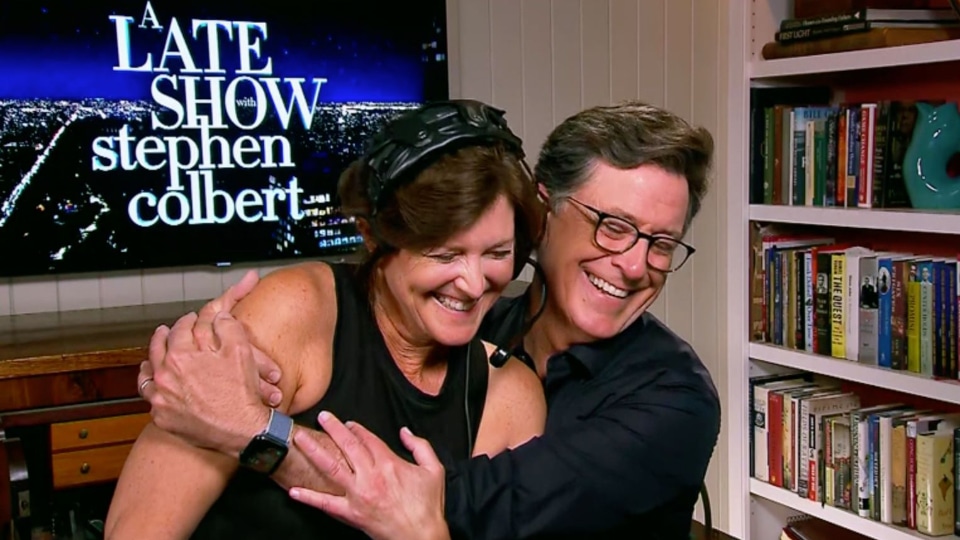 Jennifer Garner was their babysitter before she was “Jennifer Garner.” When the pandemic changed everything, the Colbert children stepped in to help get the show on the air. Evie sometimes lets Stephen know when the jokes aren’t working (there’s a GIF of her giving a thumbs down). Like so many of us, they worry about how their dog will manage when everyone goes back to work and aren’t home all the time.

Montclair’s Stephen Colbert and wife Evelyn (Evie) McGee-Colbert let loose on their back porch for a wide-ranging conversation with Montclair Film’s Executive Director Tom Hall that was streamed as a virtual event fundraiser Friday for the film and arts organization in New Jersey led by Founder and Chairman of the Board Bob Feinberg, and President of the Board Evelyn Colbert.

Colbert and wife Evie weren’t strangers to working together. In fact, the couple teamed up to executive produce the Derek Delgaudio film “In and Of Itself” that was supposed to debut at South By Southwest — until that festival was cancelled at the start of the pandemic (the film later premiered at the 2020 Montclair Film Festival). That cancellation was when Colbert realized he might not be able to do The Late Show the way he always had.

“The Late Show” ultimately went on to become “A Late Show,” with Stephen broadcasting first from his home in Montclair and later remotely from a home studio in Charleston, South Carolina for five months where the couple both grew up.

The Colbert sons were able to help out with show production for a time, but then they needed to step back to focus on their education.

“Peter was a senior in college and John senior in high school,” says Colbert. “And both of them said, ‘Dad, if I continue to be your crew, I will not graduate’ because it took a lot of their day.”

Fortunately, McGee-Colbert stepped up, taking over production and quickly becoming a pro as well as a “master at Zoom.”

“I also learned the great trade secret of doing TV production: If something doesn’t work, you turn it off and turn it back on again,” McGee-Colbert says, which invariably involved her getting messages from Stephen’s crew to crawl behind the sofa to unplug something.

“You know people say, how do you balance your professional life and your home life, I’ve found the best thing to do is to not balance them at all, just make them the same thing,” says Colbert.

Colbert has not been in his Broadway theater for almost 14 months, but the time together has been positive for the couple, who reminisced on how they first met with Colbert awkwardly doing a worm dance at a frat party where they were introduced. That meeting didn’t take, but it was a couple years later, in the lobby after a performance of Philip Glass opera called Hydrogen Jukebox at the Spoleto Music Festival in Charleston that the pair really connected. The relationship was long distance at first.

“So I lived in New York. He lived in Chicago. One of us was dating someone and it wasn’t me,” says McGee-Colbert.

Ultimately, Colbert ended that relationship and two got together, but long distance was hard at first, “because we had no money,” McGee-Colbert says.

Things got better and when Colbert did a brief stint on “Spin City” he met Jennifer Garner who was just getting her start. Colbert talked about needing a baby sitter so he and McGee-Colbert could get more work (they were married and had their first child, Madeline). Garner took him up on the job and worked as their baby sitter for a time.

“She was a really good babysitter, too and charming,” McGee-Colbert remembers. “Then she comes to us after a couple of months and says she is going to move to LA to give it a shot.”

Colbert remembers a moment, after a couple of years had gone by, when he was working on “The Daily Show.”

“I come out of the tunnel and I turn down 42nd Street to make the turn to go up 8th Avenue to go to the Daily Show and I practically pulled up on the sidewalk because eight stories tall is her [Jennifer Garner] with the gray cat suit and red wig and the gun as Sydney Bristow on ‘Alias’.”

The pair also went down their Montclair Film memory lane, with McGee-Colbert recalling when Montclair Film founder Bob Feinberg first approached her with the idea and how, for 10 years and counting, Colbert has stepped up to offer himself as the organization’s fundraising attraction and has scored some pretty amazing guests along the way — John Oliver, JJ Abrams, Meryl Streep, Julia Louis-Dreyfus — to join him for conversations, including Jimmy Fallon who Colbert have a special shout out.

“Everyone thinks late night people are at each other’s throats and that’s an old paradigm. It just doesn’t exist any more,” says Colbert. “I was so struck by how this wasn’t an act. He’s just really a lovely guy. He just knew I needed someone and wanted to do it for me. So I will always be grateful to him for being who you think he is.”

New Jersey Gov. Phil Murphy also rated a shout out from McGee-Colbert, who was tapped to join the Governor’s Restart & Recovery Commission in April 2020.

“I’m enormously grateful to Governor Murphy and his administration, they’ve been really wonderful and really willing to help the arts. I think everyone understands the value of the arts. I think we see it particularly with the sense of isolation that people have right now,” says McGee-Colbert. “I think we long to feel and communicate something together, so when we talk about the need to keep these arts organizations alive, it’s almost like a mental health appeal. There’s a social and emotional learning component to not just arts education, which is incredibly important to getting a lot of these kids in some ways back to normal, but I think having a place to go to share a beautiful experience is what we’re craving. New Jersey has a wonderful art institutions, and we have to save them.”

Colbert gave the Garden State the ultimate compliment, saying that while South Carolina is where he was raised, he was really proud of New Jersey and “really glad this is our home.”

If you missed the conversation, it will be extended online for another week. You can still watch this special program on demand by purchasing a ticket at montclairfilm.org. Tickets will be $50 for General Admission and a $500 Superstar Supporter Ticket. All tickets are tax-deductible to the fullest extent of the law.

At a special cocktail party following the conversation, Montclair Film Founder and Chairman Bob Feinberg announced that The Future of Montclair Film event is the most-successful online event in the organization’s history, raising over $150,000 to support Montclair Film’s mission

Montclair Film announced the launch of their 2021 OMAZE campaign, which, once it is safe to gather together, provides one lucky winner with air travel, a stay at a 4-star hotel in New York City, VIP Tickets to The Late Show With Stephen Colbert, and a chance to meet Stephen on set after the show to chat and enjoy a bowl of his signature Ben & Jerry’s Flavor AMERICONE DREAM! Proceeds from this Omaze experience benefit Montclair Film. Learn more at: https://www.omaze.com/products/stephen-colbert-2021

On June 26, Montclair Film is partnering with the newly formed Out Montclair organization to present a free outdoor screening of TO WONG FOO, THANKS FOR EVERYTHING! JULIE NEWMAR at Lackawana Plaza. The event, which will feature a fun game of Drag Queen Bingo before the screening, is part of the organization’s focus on LGBTQIA+ cinema in 2021. Watch this page for more in-person outdoor screening announcements throughout the summer.

As of now, with Broadway coming back in September alongside many New Jersey theaters, Montclair Film is planning an in-person 10th annual Montclair Film Festival, taking place October 21-30, 2021. Montclair Film will continue to present virtual programs as well, reaching audiences around the world through the power of its Virtual Cinema platform, powered by Eventive.

Montclair Film will be hosting the Opening Night of the 10th Annual Montclair Film Festival on October 21 at The Wellmont Theater in Montclair. The Closing Night Gala, celebrating Montclair Film’s 10th anniversary, will take place October 30 at NJPAC in Newark, NJ.