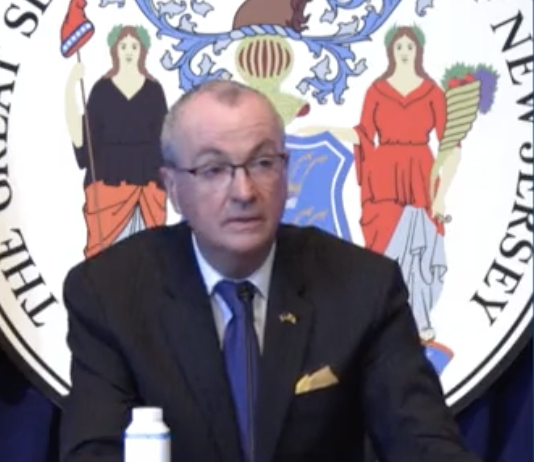 New Jersey will begin easing most COVID-19 restrictions this month, including capacity limits at restaurants and outdoor gatherings, but indoor mask and social distancing rules will still be in effect, Gov. Phil Murphy said in a major announcement Monday.

Murphy said that the state anticipates completely removing the limit on outdoor gatherings, effective May 19. All attendees or groups of attendees will be required to keep social distances of at least six feet. Current mask requirements will remain in place. 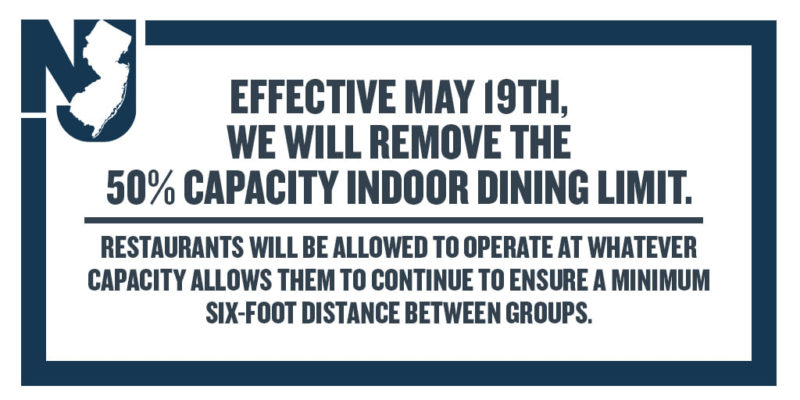 Effective May 19th, New Jersey will remove the 50% capacity indoor dining limit. Restaurants will be allowed to operate at whatever capacity allows them to continue to ensure a minimum six-foot distance between groups.

Also effective May 19th, indoor capacities for the following will be limited to a maximum of 250 people so long as social distances can be maintained:

Indoor capacity for large venues (1,000 or more fixed seats) can increase to 30% on May 19 – with six feet of distance between ticketed groups.

Murphy said that the general indoor social gathering limit will increase to 50 individuals on May 19.

Effective May 19th, the 50% capacity limits for indoor and outdoor settings/businesses currently governed by percentage-based cap will be lifted. Six feet of social distance will be required between individuals and groups.

“The steps announced today are the most aggressive steps we have taken to reopen to date,” Murphy added. “We feel confident we can do this safely because our numbers have trended decisively in the right direction over the last three weeks.”

Murphy announced Monday that the statewide rate of transmission is currently 0.37; the positivity rate for the 35,761 PCR tests recorded on April 29th was just under 4.95%.

Murphy also announced that effective May 7th, New Jersey will lift the prohibition indoor bar-side seating. Proper social distancing between patrons will be required. The state will also lift the prohibition on buffets and other self-service foods at restaurants that same day. 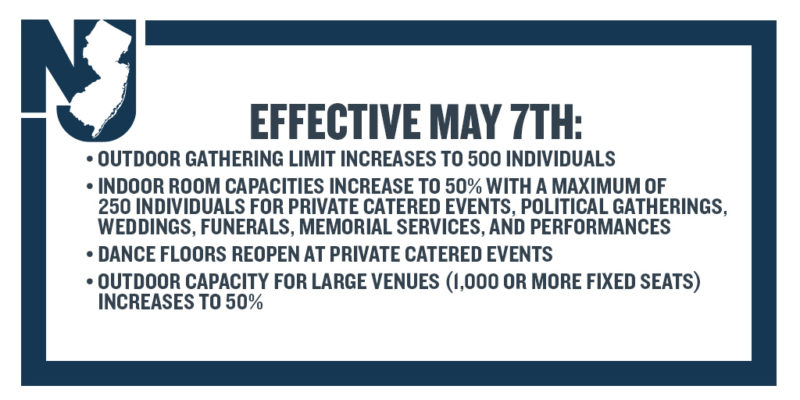 New York Governor Andrew Cuomo also called May 19 a reopening target date for New York on Monday, stating that most capacity restrictions in the state will be lifted on that date, including retail establishments, restaurants, fitness centers, amusement parks, entertainment, hair salons, barbershops, and offices.

Cuomo stated that stadiums in the state will be able to be at 33% capacity as of May 19; the MTA will resume 24-hour subway service beginning Monday, May 17.