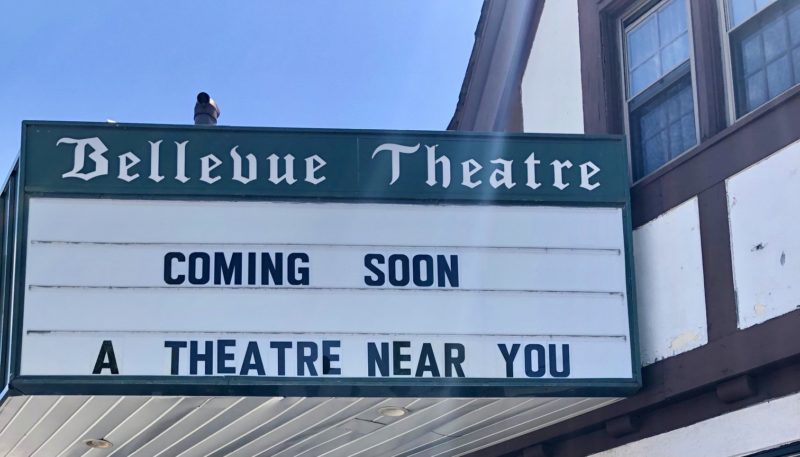 Montclair movie fans have something to look forward to this fall — the next generation of the Bellevue Theatre, in time for its 100th anniversary.

Following some starts and stops with Highgate Hall, LLC, a new team has stepped in to breathe new life into the historic theater.

Bellevue Theatre President Doreen Sayegh, representing Bellevue owner Jesse Sayegh, announced plans to bring the Bellevue back later this year, following renovations and refurbishment to the iconic Tudor building. Sayegh was confident it could happen by fall 2021 or early 2022.

“As long as we get our paperwork in order, which is all being submitted, and things move along, the, the construction piece on our part will move pretty quick,” she says. “We’ve renovated theaters or built theaters from the ground up in short periods of time, so we can make it happen. We want to bring the movies back to Montclair.”

Sayegh also believes the timing is right for the movie theater’s comeback.

“It’s been closed for too long. I know the pandemic had a lot do with it, but things are starting to get better. People are getting vaccinated. We are confident people will come back to the movies, especially here in Upper Montclair,” she says.

The news of a reopening comes one year ahead of the 100th anniversary of the landmark cinema’s grand opening back on May 13, 1922.

For Doreen Sayegh, the Bellevue Theatre is part of her own history.

“I literally grew up in movie theaters,” says Sayegh, who managed the Bellevue Theatre since her father bought it in 1997. She recently opened a theater in Cranford in 2019 (The Cranford) that operated for four months before it was shut down due to the pandemic.

Sayegh had private parties at The Cranford and showed the Metropolitan Opera live feed shows on the big screen. These are all things she hopes to now bring to the Bellevue.

“I hope to have more cultural offerings like bringing live operas to Montclair on the big screen,” says Sayegh, as well as festive events for families.

But first there is work to do.

“The show must go on, but we still need a full renovation,” says Sayegh. The plan is to build a stage in lower auditorium to maintain four theaters.

The overall renovation will include paint, new carpeting, new floors, and updating all seats with leather recliners downstairs, Traditional concessions will be offered — nachos, popcorn, candy.

Mayor Sean Spiller and Deputy Mayor/First Ward Councilor Bill Hurlock joined Sayegh under the marquee to celebrate the news and what it means to the neighborhood.

“This is a cornerstone of Upper Montclair village,” said Hurlock of the Bellevue’s significance. “It has been for many, many years, and I’m really looking forward to getting it back up and running and bringing the people in to go to the shops, eat at the restaurants and taking the venue.

Hurlock commended everybody involved for their commitment to restoring the Bellevue to its former glory and said he was confident that with support from the town, the team could “get it across the finish line.”

The Bellevue had continuously operated for 95 years until 2017 when it closed after Bow Tie Cinemas lease expired. One of its most fervent supporters involved in the comeback has been Montclair resident Ilmar Vanderer.

“I am overjoyed,” says Vanderer, who founded a ‘Save Montclair’s Historic Bellevue Theatre’ Facebook page and has memories of walking to the theater before he had a car and seeing films like “Victor Victoria.” “I have been working toward this since the minute it was closed. I wanted to get it right back open again, and it’s taken four and a half years, but we seem to be at that moment right now. I am confident in Doreen Sayegh and Jesse Sayegh, the owners of the theater, who I’ve been dealing with them from the beginning and I’m confident in their abilities to reopen their own theater in their own way.”

Sayegh thanked Spiller, Hurlock, and Vanderer for their leadership, guidance, and dedication in supporting the efforts to restore the Bellevue Theatre.

“We saw a deal fall through and we got involved,” says Spiller, of both his and Deputy Mayor Hurlock’s outreach to support a Bellevue comeback. “We know there are still steps to go, pieces that have to fall into place and things that have to happen. But this is looking like a really strong possibility and we’re really excited.”