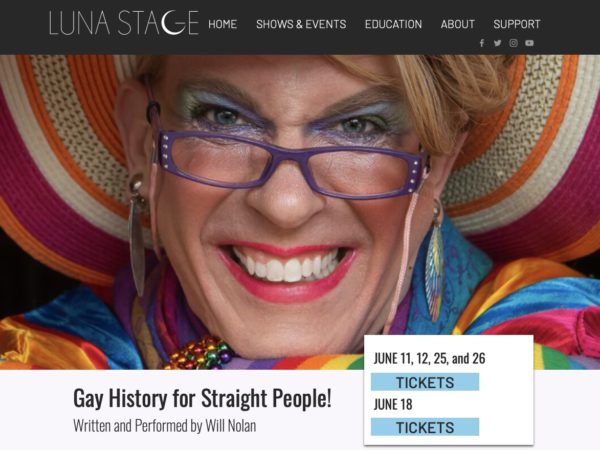 The delightful Leola, described as “your favorite Kelly Clarkson-worshipping, senior citizen, redneck lesbian,” is the sole character in the show, aimed at a 16+ audience. Leola’s goal is to help her audiences find the happiness that comes with living as our true selves. A 72-year-old who came out as a lesbian at age 70, Leola has jumped heels first into gay culture and spreading self-acceptance and celebrating love of all kinds. Leola was created and is performed by writer and comedian Will Nolan, who lives in Bergen County.

Baristanet chatted with Will about Leola’s mission, Kelly Clarkson, getting past our Pandemic Year, and being voted the 2020 BroadwayWorld Cabaret Award Winner for Spoken Word.

Baristanet: Your character, Leola, is described as being on “a mission to heal this country.” From what do we need healing? And how did she decide to approach that mission via entertaining “sermons”?

Will Nolan: Leola was born out of the idea that everyone, regardless of age, is still striving for some sort of acceptance in their life. Leola came out at 70 and now, at 72, is finding her way in a new gay world. I think during that process, she has realized how many people are denying who they really are and are afraid to be their true selves. She wants people to love themselves and then love each other. For her, coming out is like really good cake — once you have the cake you want everyone to try the cake and enjoy the cake too. She just wants everyone to find the happiness she has by becoming her true self.

Her closing mantra at every sermon is: Be proud. Be love. Be you. And she talks a lot about Kelly Clarkson because Leola believes Kelly is Jesus’s little sister and the second coming!

Because she’s more than just a performer and manager of the deli at the Piggly Wiggly, calling what she does a show seemed to lose some of the impact of her work. Sermon doesn’t quite work because it implies that the show is religious, which it’s not, though it does save souls. Leola prefers shermon because it is both a show and sermon combined. Plus she usually passes out some sort of snack, which is more like church than Broadway.

Baristanet: How does Will Nolan benefit from Leola? What inspired you to create such a joyfully flamboyant and lovingly fun character?

Will: Leola gets to say all the stuff I’m too shy to say. I’ve always been more of an introvert but playing Leola, who is really the ultimate extrovert, has forced me to be more social and connect with people. My mom is extremely outgoing – she’s the ultimate Southern woman – and that’s really who I’m playing. She’s just not a lesbian. Leola represents a rainbow mix of all the great women I’ve been raised by or grown up with. She’s inappropriate, embarrassing, completely un-PC, and yet full of heart and truly believes in the goodness of all folks.

Baristanet: Leola idolizes Kelly Clarkson, and describes her as “Jesus’ little sister.” What is so admirable about Kelly Clarkson that attracts Leola? Any other performers Leola admires?

Will: Leola would argue that she had no say in her love of Kelly Clarkson because it was God’s will. He always said he was going to send another one of his kiddos down to finish the work Jesus was just able to start, and then on September 4, 2002, Kelly was crowned the first American Idol and the Second Coming. She’s all of us, she’s the girl next door, but she’s quietly changing the world with her voice and her humor and her heart. It’s just that simple. And Leola has the receipts to back it up!

Her other favorite artists include Dolly Parton, Indigo Girls, kd lang, Amy Grant and her Jews: Barbra, Barry & Bette. Oh, and of course Harry Styles. None are the Second Coming, though now that Dolly has invented vaccines and bluegrass music and amusement parks, she’s pretty close.

Baristanet: Leola’s new show, Gay History for Straight People, sounds like it has a very specific intent. What do you hope audiences will takeaway from the performances?

Will: When Leola tumbled out of the closet at the age of 70, she fell into a community and a history that truly excited her. Gay History for Straight People is very much Leola’s interpretation and retelling of gay history, by going through the alphabet (Gay to Z, as she says). She may not get all the facts right, or even close to right, but at the end of the day I hope audiences will gain appreciation for the complex history the queer community has lived through, the progress the community has made in a short amount of time, and that everyone will take a moment to thank the incredible women and men (in particular trans women of color) who fought for the rights of the queer community. It’s also a celebration — 75 minutes to laugh and celebrate our pride!

Baristanet: Leola has five performances via Luna Stage (at Valley Arts) throughout June including one at Van Vleck Gardens in association with Out Montclair. All these shows will be outdoors. How does that change the performance for you?

Will: I’m excited about being outside. I had my first show inside in a theater last week in New York City at the Green Room 42 where I am in residency. I think people are still getting comfortable with the idea of being inside four walls with people they don’t know. Outside will give us all a little breathing room, literally, and help people relax into the idea of seeing live theater again. It will especially help for the audience participation elements! The great thing about playing this character is whatever happens happens, and we’ll just incorporate it into the show then and there. You have to go with the flow when you’re performing outside, and I think this show will work great for that.

Baristanet: How did you develop the current show’s content? Did you see gaps in knowledge, misunderstandings, prejudices to disrupt?

Will: The show stems from my own ignorance. There is so much I don’t know about queer history and doing the research for this piece opened my eyes to much I didn’t know about. I think younger generations (well I guess I’m not that young!), we tend to take for granted the hardwork our ancestors have put in to get us to where we are today. That is definitely the case in the LGBTQ+ community. I wanted to share a little bit of the history I uncovered for myself, with audiences who may not know either. When I say gay history for straight people, it’s really for all people because there is so much to our history to learn!

Baristanet: Leola’s Lady Land was originally slated for Luna Stage last March, but was postponed due to COVID19. Has the show changed over the last year? If so, how? Have you performed remotely, and how did that go (or not)?

Will: We talked early on in the pandemic about doing this show remotely, and we were going to give it a try. But last Pride month was so soon after George Floyd’s murder and the focus was on, as it should have been, the Black Lives Matter movement. There was also growing support for transgender rights and protections for trans people of color. I didn’t feel like my voice or this show was needed in that moment. There were other stories that needed to be told.

The show has always celebrated the women and trans women of color who really kicked off the modern gay rights movement in this country, starting at Stonewall. I think that celebration will be even more meaningful considering the climate we have lived in and what has happened the past year. 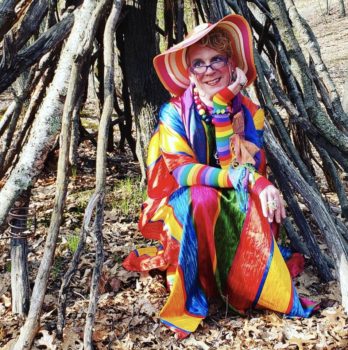 Baristanet: How did the past Pandemic Year affect your comedy and development of Leola as a character? What did you do to stay inspired and pass the time? How did Leola spend quarantine time?

Will: I have to say, I really struggled to be funny again for a long time. It just didn’t feel right. There was so much pain and fear and sadness from the pandemic, social justice issues, the election. It was overwhelming. The Voting Writes Project was a God-send because I felt like I could talk about something real but also slip back into Leola’s platform heels and caftan and try to make people smile again. The Lady Land Vapors in February helped inspire me to write a new show, and once vaccines hit, it felt like live theater could happen again.

I miss being an audience member almost as much as performing. My husband, son and I would see shows almost weekly and for that to not only disappear, but all of our friends in the industry lose work and security, has been heartbreaking. It feels like hope is finally returning though as people step on stages again. Thank God for good TV and a lot of great family binge-watching to keep me inspired and tapped into what pop culture there was during the insanity of the past year!

Leola has spent the corntine on the front lines, working nonstop at the Piggly Wiggly deli to make sure essential workers have their luncheon meat. You don’t stop serving cold cuts ‘cause of the corona. She and her ex-husband/best friend Gus, who she lives with in a trailer on the coast of a swamp in South Georgia, they did some home renovations and turned their doublewide into a triplewide. So she’s been busy. She tried to watch Tiger King, but after 7 or 8 episodes and the reunion special, she got too nostalgic because it felt like she was watching home movies. Plus she discovered WAP on the radio and is still trying to understand what the song means. Every time she tries, she ends up making mac & cheese.

Baristanet: We know that you, Will Nolan, now live in New Jersey, but Leola lives in Georgia, where you are originally from. How has Leola found our area, and does it reflect your experience of getting to know The Garden State?

Will: Leola is new to New Jersey, just learning recently that it is an actual place and really exists. Leola thought New Jersey was one of those things parents told their kids to make them behave, like stranger danger, razor blades in apples, or culottes. Now that she knows it is a real place, she is a huge fan and excited to wipe gay all over it!

My husband and I fell in love with New Jersey when we moved here 17 years ago. We had no idea how beautiful and inclusive New Jersey was. We’ve gotten every kind of married we can get here, and when we went through the adoption process with our son 14 years ago, we loved how supportive the state is of adoptive parents. This pandemic has really helped seal the deal for us. New Jersey has handled closures, vaccine distributions, mask mandates really well overall. As everyone knows all too well, this whole experience has been unprecedented. There’s no way to do everything right in a global pandemic. But New Jersey has done a good job and made us feel safe and protected. 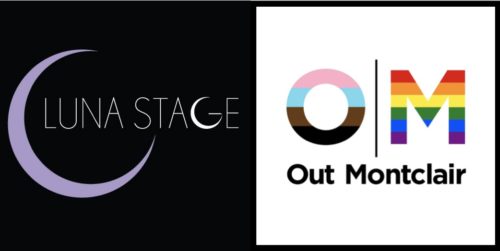 Leola’s Lady Land’s Gay History for Straight People will be performed via Luna Stage over five dates in June. The June 18th performance is at Van Vleck Gardens in association with Out Montclair. Seats are available in Pods of 4, Pairs of 2 and individually. During this time of pandemic, all Luna Stage programming is pay-what-you-wish. Your ticket purchase supports local arts programming, and ensures that creativity and connection is accessible to all. June 18th tickets also support the work of Out Montclair.