Back in April 2019, Watchung Elementary School parents were concerned about the Watchung Field project, a $1.3 million proposed field expansion plan, that would make Watchung’s playground the smallest play space of the town’s six elementary schools and create an unsafe space. Then the project was then put on hold.

Watchung School parents planned a protest after learning that construction on the field was to start June 1; now the project has been postponed again. Parents want answers regarding what remains an unclear plan for the future of the playground and a proposed field expansion plan that would take away 70 feet from the playground instead of the 30 feet originally needed for the field to be in varsity compliance.

“The most glaring inaccuracy is that the project will only lengthen the field by 30 feet and that Watchung parents are simply being territorial and obstructionist. None of this is true,” says Watchung parent Henry Neff, who created a video above explaining the impact of the proposed plan.

The current plans will extend the athletic field by 70 feet and that 70 feet is 40 feet more than the district requires for the field to meet varsity field-size regulations, says Neff. That extra 40 feet will take a significant amlunt of play space away from elementary school students.

Neff says the Watchung Playground Committee has never opposed renovating Watchung Field or extending it by 30 feet to make it varsity-compliant.

“What we oppose is the town taking that additional and completely unnecessary 40 feet. The impact is devastating and would leave the elementary students with a small, very narrow strip of real estate that is wildly impractical and raises a slew of safety concerns,” he says.

Neff said the group had a call with Dr. Ponds and the athletic director, Dr. PJ Scarpello. According to Neff, Scarpello and Ponds seemed surprised to learn about the additional 40 foot increase and were not looking at the official plans from the architect. 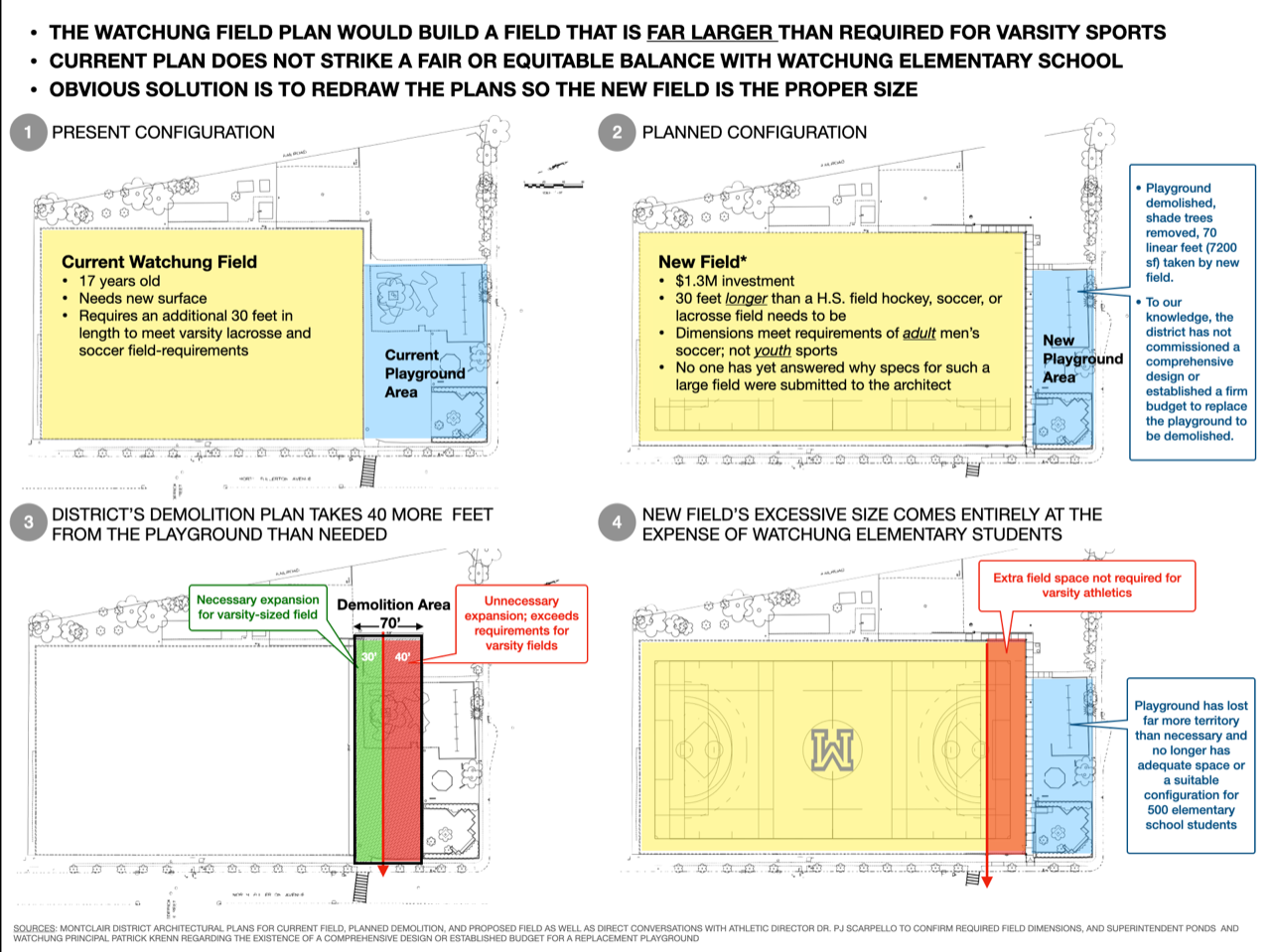 “Someone – for reasons we do not know – designed a field that’s way too big and the town appears willing to double down on this mistake even though it will completely wipe out an elementary school’s only playground in the process,” says Neff. “What we are proposing will still get the athletic department the new and properly sized field they require while ensuring the elementary school kids still have enough space for a safe playground that meets their needs. It’s a solution that actually gives the sports teams everything they’re asking for— they’ll just have to wait a little longer so the plans can be redrawn and bids resubmitted.”

Another concern, says Neff, is that when the field expansion plan was approved, there was no plan or budget designated to replace the playground they intended to remove.

Neff said he asked Montclair Schools Business Manager Emidio D’Andrea in April 2019 to see the plan and budget for the replacement playground, but he couldn’t show him one.

Two years later, Neff says he still hasn’t seen a complete playground design (one that includes equipment, shade solutions to replace all of the shade trees that will vanish, play surface, etc.) or a budget.