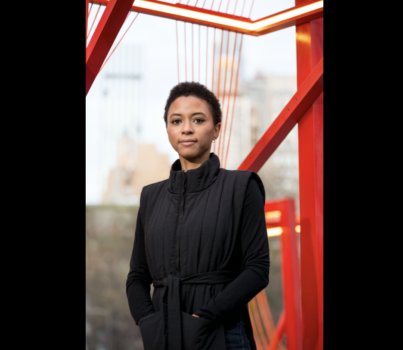 Montclair architect Nina Cooke John’s busy and accomplished year just outdid itself. Cooke John’s design for a Harriet Tubman tribute, “Shadow of a Face,” will become the City of Newark’s newest monument in Washington Park. The monument to Harriet Tubman will also include Newark’s role in the Underground Railroad. With the design chosen, the monument is planned to be ready for opening Summer 2022.

Cooke John ended 2020 with the opening of her interactive installation “Point of Action” in Manhattan’s Flatiron District. The installation later moved to Montclair’s Crane Park in the spring of 2021, giving Cooke John a hometown audience for her work. Throughout these openings, Cooke John was developing and submitting her designs for “Shadow of a Face,” her expansive and interactive memorial to Harriet Tubman.

With Cooke John’s design as a centerpiece, the park will be renamed Tubman Square to honor the iconic abolitionist. “Shadow of a Face” will help the renamed park become a place of pilgrimage where people will visit from all over Newark, the tri-state area, and afar to learn about Tubman’s life and journey. In addition, Cooke John envisions that visitors will “connect with themselves and get one step closer to their own liberation from whatever weight they might be carrying. When they come they will find a place that is welcoming, with benches that encourage them to sit and stay.”

Listen to Nina Cooke John describe the design for “Shadow of a Face.”

The interactive monument includes a mosaic portrait of Tubman. Additional tiles will include stories of individual community members, and bricks will thank donors who made the memorial possible. A map of Harriet Tubman’s route through New Jersey as well as milestones in her life is also a part of the art. Envisioned as a place to contemplate, learn, and gather, “Shadow of a Face” is meant to be experienced, similar to “Point of Action.” It will also use light as an element, again connecting Cooke John’s style in past designs. See the proposed design here: Shadow of a Face.

Nina Cooke John spoke with Baristanet about the monument and her inspirations for the design.

Baristanet: Congratulations on the honor of having your design for “Shadow of a Face” being chosen for such a prominent space in Newark! What are you most excited about for the next year of planning and installation?

Cooke John: I am really excited about the community workshops that we have planned.  I’ve been thinking about the monument not only as a space to learn about Harriet Tubman but also as a living memorial to the people of Newark.  The workshops will capture their stories both in audio format and in ceramics that they will create.  The ceramics will be incorporated into the monument on the ground surface and on the walls.

Baristanet: What encouraged you to enter the national call for design entries?

Cooke John: I wasn’t going to enter at first since I’m not a figurative artist. A friend encouraged me because I’ve recently extended the scope of my practice to include public engagement work and public art. I wanted to contribute to the discussion of how monuments can be active public spaces.

Baristanet: The portrait on the side of the monument is impressive, and it is meant to be touched and explored. Why was it important to you to have Harriet Tubman’s face prominently featured and within reach?

Cooke John: Our heroes are complex people. Harriet Tubman, in particular, had many roles beyond her work in the Underground Railroad. In the monument I wanted to work with the duality of the ‘larger than life Harriet Tubman’ and the Harriet who was like any of us. I want any woman, any visitor, to see themselves in her, to see her as a woman who had everyday struggles just like us. The figure of the face will be textured to encourage people to connect with her through touch.

I was particularly inspired by the Simone Leigh sculpture, Brick House, on the high line. To see something larger than life that looked like me was striking.

Baristanet: In contrast to the portrait, the center sculpture of Tubman’s full silhouette feels at once traditional and wholly modern. What brought these design elements together?

Cooke John: It was really important to me to claim space for her in the park which has other sculptures. She needed to have presence. It was also important that you could see her from afar, the sculpture acting like a North Star, both in the day and at night, similar to the night star that helped to guide Harriet Tubman during her multiple journeys.

Baristanet: Why was it important to include the footprint of the previous monument?

Cooke John: The history of Christopher Columbus will always be with us. We can’t come to terms with the realities of our present if we don’t acknowledge the effects of history. History is with us and is an integral part of our present.

Baristanet: “Shadow of a Face” offers a physical space to rest and gather, but it is also actively educational for visitors. How will you choose which events in Tubman’s life and New Jersey history to include?

Cooke John: I am not a historian, so I will be working with Newark historians on the two parts of the wall. The outer surface of the wall will highlight significant points in the life of Harriet Tubman, while the inner surface will highlight Newark and New Jersey history related to the underground railroad like the names of the safe houses in the area.

I will be leaning on these historians, and the Newark historians in particular, to help me edit what is included. One of the contributions of the artist apprentice for this project, Adebunmi Gbadebo, will be helping with the historical research. Gbadebo is a Newark-based artist who has recently started work in ceramics, and is focused on texture-based art.

I’m just really excited to be working on a project of such significance here in New Jersey. I hope that the people of Newark and beyond will find an inspiring and welcoming space in the new monument as it provides a place for active engagement in the city.

Those who want to contribute to the installation of Nina Cooke John’s Harriet Tubman monument can contribute here via the Newark Arts Council.