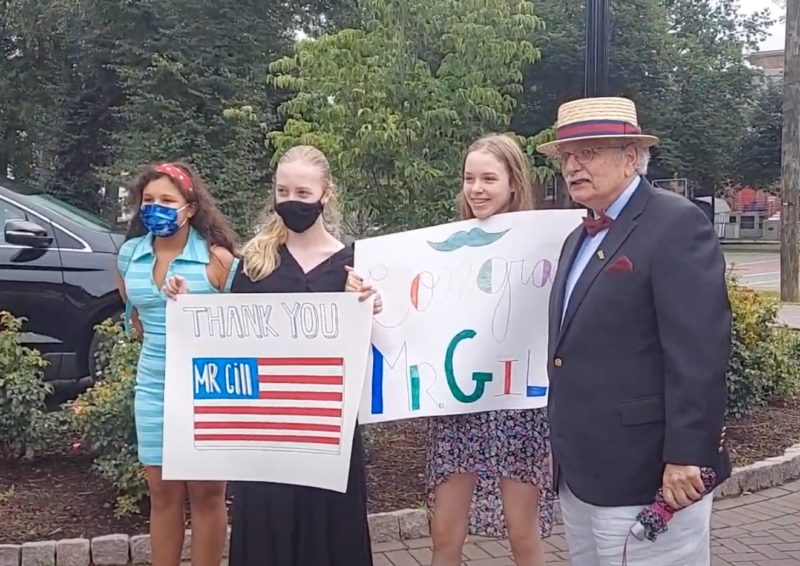 Montclair Celebrates organized a Caravan of Heroes Saturday to honor small businesses and essential workers who were on the frontlines locally throughout the global pandemic.

Montclair Celebrates Fourth of July Committee Member Toi Blount explained that during the planning process for the annual parade, due to the uncertainty COVID restrictions and policies, the traditional parade had to be canceled for the second year in a row.

“As we got closer to the actual Fourth of July, a lot of restrictions were being lifted and we wanted to do something. So we put together the Caravan of Heroes,” said Blount, adding that the Committee also wanted to celebrate its longest standing Grand Marshal – veteran Glenfield School teacher Dan Gill, who was selected as Grand Marshal of the 2020 Montclair Fourth of July parade.

During a ceremony that took place at the Wally Choice Center in Glenfield Park following the caravan, officials took the podium to recognize Dan Gill for 50 years of teaching excellence.

“There is no greater champion in the town of Montclair than Dan Gill,” said Congresswoman Mikie Sherrill. “In my family we call him Mr. Gill.”

Sherrill spoke of her own daughter having the honor of being in House Gill at Glenfield Middle School.

“He has just been a stalwart member of our community and has meant so much to so many children throughout decades of service to our community,” Sherrill said of Gill.

Sherrill then presented Gill with a flag flown over the Capitol of the United States of America.

Assemblyman Thomas Giblin spoke of Gill as a family man – a father and a grandfather – and a teacher who has had tremendous impact and influence on generations of students.

Assemblywoman Britnee Timberlake spoke of learning about Gill while she served with his son, Essex County Commissioner Brendan Gill.

“The work you have done in Montclair to make sure that this town lives up to its mantra of diversity by helping to desegregate the Montclair School system speaks volumes,” said Timberlake.

Commissioner Brendan Gill thanked Mayor Sean Spiller, Councilors Robert Russo, David Cummings and Lori Abrams for being at the event and spoke of what an emotional day this was for his family, the difference his father has made in the lives of so many students and of his dad’s local fame.

“Many years ago, when Michael Strahan was member of the Montclair community, we were on line at the supermarket to pay for groceries. Strahan was in front of us and a couple of middle school kids were behind us,” Brendan Gill recalls. “One of the kids said ‘Hey that’s Michael Strahan of the New York Giants.’ And then the other one said, ‘That’s nothing. If you want to see somebody famous, there goes Mr. Gill.'”

Brendan Gill ended his remarks by saying: “I will forever be proud to be identified as Mr. Gill’s son, even when I am getting in trouble.”

Honoree Dan Gill took the podium, thanking his wife of 49 years, and saying how it has been a wonderful ride living in Montclair.

“When I began teaching here, I knew immediately that this ex-New Yorker had found a place that really believed in the things I believe in. That is to educate every single child that walks into the door of a school,” said Gill.

“As our leader, it has been a very, very difficult year to have as your first year, but you have survived. And, we still have a few things to talk about,” said Gill. “But we want you to be successful because when you’re successful, we are all going to do well. And all our children will flourish. And I look forward to that as a member of the Glenfield School community.”

Gill asked all his coworkers from Glenfield School to stand and said: “When you honor me today, you are honoring these people.”

Then Gill started his lesson regarding the significance of the Fourth of July.

“Today we celebrate words. We celebrate the words ‘we hold these truths to be self evident, that all men are treated equal.’ And yet, not everybody understands the words, which is unfortunate, but that’s where we started. And that’s what we need to remind ourselves. And each and every day, we need to be reminded about what my role is in making those words true.”

July 4th is a celebration of our nation’s birth but it doesn’t end there, said Gill.

“Our history need to be known so we can fulfill those words ‘all men are created equal.’ It is our job as a nation that when we say all, it means all.”

“I call him an educator because I never had Mr. Gill, but Mr. Gill taught me. And he taught all of us” said Cummings. “If you went to Glenfield, you feel like you had Mr. Gill because that was just the effect he had.”

Blount returned to the podium to acknowledge and honor one of Montclair Celebrates’ own, Donato DiGeronimo, giving him a special thank you for all his work on the committee as its leader.