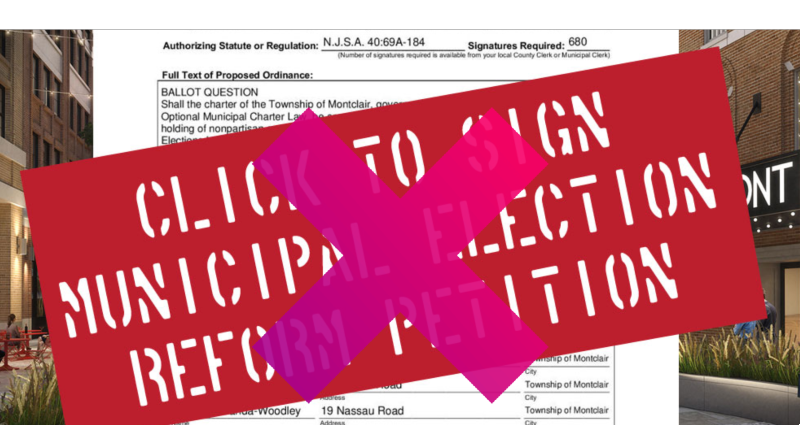 Vote Montclair made a final push in July, wrapping up its official petition for a referendum on moving Montclair’s municipal elections from May to November, but on Friday, the local civic group was surprised to learn the Township had rejected their petition.

According to Vote Montclair, the group received a letter Friday via email from Township Attorney Ira Karasick that Township Clerk Angelese Bermúdez-Nieves must reject Vote Montclair’s petition. Karasick’s letter detailed five deficiencies in the petition, with the most “fatal flaw” being moving up the date of the next election to November 2023 from May 2024 — something that could not be done because it would shorten the term of the current council.

Vote Montclair maintains that before the petition was circulated, Karasick had reviewed it and made suggestions to the group’s own attorney who incorporated the suggestions into the version ultimately circulated and signed by almost 1,000 Montclair voters.

Vote Montclair shared the news in an online statement and has its own theory about the voided petition.

“That the powers-that-be in the Township have so cynically worked to derail a citizen initiative to increase voter participation during a national awakening about voting rights says everything one needs to know about their contempt for voters,” says Vote Montclair’s Erik D’Amato

“The Township Attorney isn’t the root of the problem. He obviously came under pressure to make sure the question never made it in front of voters, just as some notable local political figures also urged me to desist in ways that were clearly designed to be menacing,” D’Amato adds.

Vote Montclair had submitted its petition, with 989 signatures, because “changing the election from May to November will significantly increase voter participation, while saving the Township roughly $100,000 per election cycle,” according to the group.