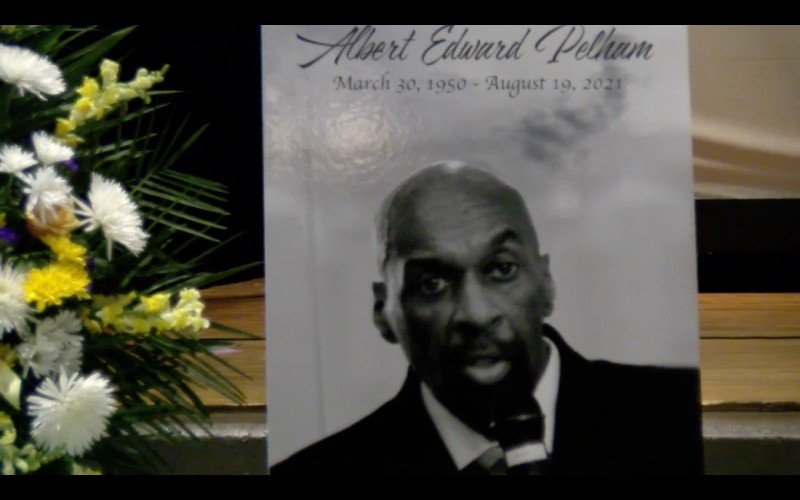 Family, friends and government dignitaries gave a glimpse into the complex personality of a local titan that shaped the town for more than 25 years and helped so many of its residents as they celebrated the life of Albert Pelham, Friday morning at Montclair High School.

Pelham, head of the Montclair NAACP, coach and community activist was remembered as a straight-talking man of action who made a huge difference in the lives of the people he touched. The man affectionately nicknamed Coach, Big Pine, Mr. Pelham, Alpine and Al was also executive director of the Montclair Neighborhood Development Corporation (MNDC) and president of the Montclair African American Heritage Foundation.

The former Prudential executive, who died of cancer at age 71 on August 19, was remembered as a man who gave everything he had to help people in need. His daughter, Rhonda Fischer, gave a touching speech that captured the humanity and dedication to service Pelham embodied.

“Acts of Service Were His Love Language”

“He was my guy, my rock, and the one I call every day and say, ‘Yo, yo, yo yo Pops.’ And he’s often reply with ‘What? All that education and that’s how you talk to your father?’”

Even while battling cancer in the final weeks of his life, Pelham was committed to helping the people who needed him, said Fischer.

“I would come to the hospital early in the morning, feed him breakfast from his beloved Ray’s and we talk and watch TV. And on the days where he was feeling a bit better, he’d asked me if he was off phone punishment and have me help him return calls so that he could conduct business…It was clear that acts of service were his love language.”

During the service, hosted by Rev. Craig Dunn of the First Baptist Church, family and friends shared that while Pine could be prickly, this fixture at the Park Street YMCA threw himself into helping them, coaching young athletes, ensuring at-risk students had a place to learn and working for racial justice.

“This town owes you a debt of gratitude.”

“I would go to Al with these great ideas that I was going to sell him on and get community support for. And he would look at me and say, well, that’s not going to work. He only had time for ideas that were going to help people succeed. And I have to tell you, it was so incredibly helpful to talk things through with him,” said Sherrill.

Assemblyman Thomas Giblin (D-34 District), lauded Pelham’s ability to bring people together, generate positive energy in the community and help people through his work on the NAACP, Project Oasis After School Tutoring and the MNDC.

“His goal was impacting as many lives as possible. He tackled the most difficult challenges facing Montclair head-on and was a master at developing and nurturing relationships at every level of government to get things done.”

“When Pine had a vision, he knew who to put in place to get it done,” said Cummings, who also worked with Pelham on the MNDC. “He was a servant leader. God bless the entire Pelham family. This town owes you a debt of gratitude.”

Rev. Carl Day of Culture Changing Christians Worship Center of Philadelphia and Montclair, delivered the eulogy. He reflected on the New Testament passage Timothy, chapter 4, verses 6-8. It describes how St. Paul, writing from jail, expects to die soon, but does not fear death because he knows he has fought the good fight and has kept the faith. Rev. Day called on the audience to continue Pelham’s work.

“Are you literally fighting the good fight or are you just spectating the fight itself? Can we sit here and make the same statement that we are finishing our race, or have we even joined the race? These are things that we got to ask ourselves as we celebrate the life of an amazing man of God. When it’s all said and done, will we be receiving a crown or are we too busy, focused on our outward circumstances? These are the things that prevent and hinder us from finishing the race. This man [Albert Pelham] understood who he served, what he was called to and what was promised to him at the end. And this is why we celebrate his life.”