What started as an invitation to apply for a commission project grant from New Music USA amid a global pandemic forged a unique connection between the Garden State, Andes Mountains, and the patterns of movement that reflect conditions of a changing world in the New Jersey Youth Symphony’s La Frontera: Stories of Migration in Movement. The ensuing narrative tracing the impact on the cultural landscapes of both the places people leave and the places they settle came to fruition in a taping on June 10, 2021 as one of 110 projects chosen demonstrating the imaginative, diverse, and high-quality work that New Music USA is dedicated to supporting. 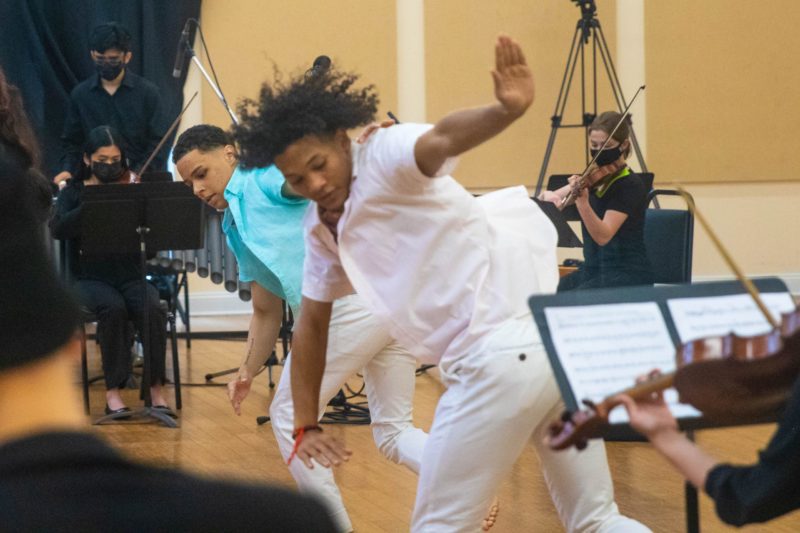 Helen H. Cha-Pyo, artistic director and principal conductor of the New Jersey Youth Symphony (NJYS), a program of the Wharton Institute for the Performing Arts, saw an opportunity to explore the social impact and response surrounding migration, as well as the critical challenges of immigration and displacement, through the collaborative work. In addition to teaming up with Peruvian composer and guitarist Raúl Abbad for music and libretto, Cha-Pyo looked to the Paterson-based student dance company Inner City Ensemble for the movement component of the piece. Under the direction of Artistic Director Nicholas Rodriguez, the Inner City Ensemble performs original repertoire typically centering on themes of social justice.

The awarded new American music projects spanned 26 states and included a wide range of activities and events involving new music as a central element; these projects involve collaborations in dance, theater, opera, and the visual arts. 54% of the 2020 Project Grant participants were people of color and 58% were women.

Said Cha-Pyo, “La Frontera, a deeply personal work by Raúl Abbad, has opened up doors to a new world of sound for both the performers and the listeners. This exciting collaboration with Raúl and Nicholas Rodriguez represents New Jersey Youth Symphony’s commitment to amplifying voices of diverse artists and perpetuating their stories through artistic interpretation.”

The 17-minute piece in four movements features string ensemble, percussion quartet, guitar, piano, mezzo-soprano, and dancers. Due to COVID-19, and for social distancing measures, the string ensemble was scaled down for the filming at the New Jersey Youth Symphony’s Burgdorff Hall. Using rhythms and styles from across Latin America and the Peruvian soundscape to reflect the tapestry of traditions that influenced Abbad’s journey, countries and cultures as distant as Argentina and Mexico are embraced as a common musical language throughout the work.

“Like the language of music, we share a common humanity, despite real and imagined borders. This piece sends the message that ultimately we are all immigrants and people in motion,” said Abbad.

Each of the four movements has a distinct style and foundational rhythm with the four corners of the stage representing North, South, East, and West. Much of the choreography for the four dancers, two high school seniors and two recent high school graduates, represents the comings and goings we all experience throughout life. As the dancers emerge, the work opens with Abbad’s mother reciting ancient poetry in Quechua, an essentially spoken indigenous language of the Peruvian Andes.

Said Abbad, “The first movement is split into two sections. The first section is called a Yaraví—a type of slow melodic chant that typically serves as the introduction to a traditional Andean song. The lament is continued and built upon by mezzo-soprano and Wharton faculty member Ema Mitrovic. The second section takes the same Yaraví theme and turns it into a faster rhythmic dance known as Huayno, from the central Andes of Peru.”

The second movement is based on the zamacueca rhythm from Peru. “Other Latin American countries use similar rhythms in their own traditional music,” said Abbad, “but with various respective names. The rhythm is driven by the bass part.”

Continued Abbad, “The third movement is based on the cumbia rhythm from the Amazon rainforest, a rhythm which can be found throughout Latin American music. The melody and groove create a sultry soundscape that sets the tone for the dancers and later for the instrumentalists to improvise over.” Each dancer, paired with an instrumentalist, takes turns extemporizing, a display of both resolute individuality and a shared sense of purpose.

The final movement, entitled Aeroplanos, takes inspiration from the notion that the airplane is the main mode of transportation in contemporary migration. The lyrics, written by Abbad, describe the search for a place to belong and finally conclude that the sky is a shared space that has no boundaries. The ballad takes inspiration from the music of Argentinian Rock en Espanol composer, Charly Garcia, and features an ostinato figure imitating the sound of an airplane.

La Frontera: Movements in Migration can be streamed on Wednesday, Sept. 1 at 7:30 p.m. on WhartonArts.tv. For more information about the New Jersey Youth Symphony, visit NJYS.org.