This is the second time Apricot Sky Productions, based in the Grove Street Theater, has presented a festival of plays on this grave, historical subject; the first time was for the 10-year anniversary in 2011.

“I don’t want people to ever forget that day,” says Alter. “The response to my call for auditions was overwhelming. I am extremely proud of all those involved with the show for their enthusiasm and involvement.” The playwrights and directors and most of the actors are from New Jersey.

“Remains” (written by Eric Alter and directed by Bob Lowy) is a poignant play about the son of a NYPD officer who was killed on 9/11 and how the son now wants to follow in his footsteps to serve the community.

“The Job Interview” (written and directed by John Frassinet) is a tense play about a woman’s decision to take a job starting on the very day of the disastrous attacks.

“Days” (written by Eric Alter and directed by Bob Lowy) is a terse monologue about one sister’s struggle dealing with the daily memories of her grief.

Excerpts will be presented from “Among the Missing” (written and directed by Elaine Molinaro), the true story of a family’s journey to fill the hole left in their lives after unimaginable loss.

In “The Grieving Pool” (written by Eric Alter and directed by Helen Exel), we eavesdrop on two strangers who meet at a 9/11 memorial and wind up reminiscing about their loved ones whose lives were cut short by the attacks.

“Catch the Morning” (written by Eric Alter and directed by Bob Lowy) features the interplay between father and daughter coming to grips with the unspeakable tragedy of September 11.

“The Quarter” (written by Lisa Annitti and directed by Bob Lowy) is a monologue from the viewpoint of a man who recalls the horrific morning of 9/11, how it unfolded, and the guilt he harbored at his tragic loss.

“Once a Year” (written by Eric Alter, directed by Elaine Molinaro) is a vignette about a group of women who gather once a year at Ground Zero for the reading of the victims’ names and reminisce about their times spent together with their loved ones.

The final play of the evening, “Children of September” (written by Eric Alter and directed by Alexander Oleksij) is the story of a young girl suffering from trauma and whose time in therapy returns her to hope and helps her believe that anything is possible.

Admission is completely free; suggested donation of 10 dollars or more will be appreciated. All proceeds from the show will go to the National September 11 Museum and Memorial in New York City. Masks will be required for both vaccinated and unvaccinated people for entrance and for seating in the theater.

The shows run on Friday, September 10th, and Saturday, September 11th, at 8 p.m. Suggested audience age minimum is 12 years old. The Grove Street Theatre is handicapped accessible. Free parking is on the left side of the building.

Apricot Sky Productions, the Montclair, NJ-based professional theater company, has been bringing low-priced creative entertainment to this Off-Off-Off-Broadway theater venue for 20 years. The company’s mission is to make theater more approachable and to introduce new fans to high-caliber writing, directing, acting, and staging. 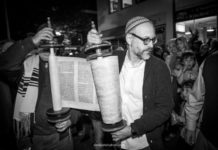