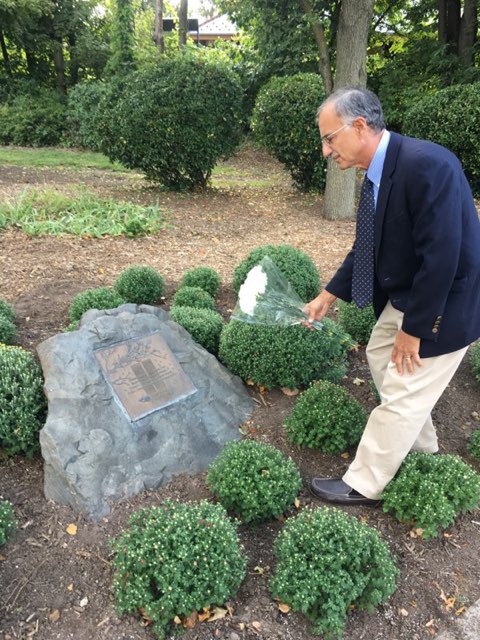 Baristanet spoke to Bob Russo, current Councilor at Large and the Montclair mayor during the 9-11 attacks. Russo remembers that day 20 years ago and the challenges of the days, weeks and months that followed.

The sun was shining and there was a clear blue sky over Montclair on Tuesday, September 11, 2001. Around 8:45 a.m., then Mayor Bob Russo was home preparing for the day when his wife called.

“‘Did you hear there was an accident at the World Trade Center?’ she said,” recalls Russo. “The whole thing happened so suddenly. I put on the TV and then found out it wasn’t an accident.”

Russo remembers watching the Towers burn and thinking, “Oh my God, there are people from Montclair going to New York who may be in the building already, or maybe arriving. As mayor, I wanted to find out who from the town was there. Our town manager, police chief and fire chief were all feeding me information. Council members from each ward were also getting reports.”

An attack like this was a shock to the mayor as it was for many people. “People couldn’t even conceive that this would happen. To have a group of people train for this and take four planes. Back then, we just lived our lives freely and openly in this country, never thinking anything like this would happen on our soil,” says Russo.

Only a few months earlier, Russo partied at Windows on the World, the posh restaurant on the 107th floor of One World Trade Center, with fellow Montclair residents.

“Three of us from the Town Council went to a fundraiser for the Montclair Art Museum. It was a big event with lots of Montclair people up there having a great time.” Russo remembers peering out from the top of the world during the fundraiser. “It was cool.”

Fast forward to 9-11. As the mayor gathered information on residents who were at the Towers, firefighters from Montclair went to Jersey City to cover for the first responders from that town who went to the World Trade Center. Later, Montclair first responders participated in the recovery efforts at Ground Zero.

In addition to the reports he was getting, Russo found out about more people impacted from the families he first reached out to.

“When I visited one family affected by the attack, the wife of that person helped us connect with other families from Montclair with members at the World Trade Center. There were so many families that I connected with that day. Other council members also went to the homes of the people in their individual wards.”

The days and weeks following the attack were anxious. Through the uncertainty, neighbors supported the victims’ families.

“People were bringing food and trying to comfort the families. People were gathering every night, hoping to hear something. It was like a vigil that went on day after day, night after night, hoping. The town rallied around these people.”

As days stretched into weeks, hope faded and the search for victims became a recovery effort. Nine residents of Montclair died in the attacks. Seven of the victims were husbands with wives and children. “We lost people from all parts of town,” says Russo.

In October of 2001, the Town Council started working on plans for a memorial. Denise Mayer, owner of DJM Architectural Signage, volunteered to design the memorial. As the project progressed, more volunteers joined the effort.

Montclair’s second 9-11 monument is a girder from the Twin Towers, dedicated to the memory of Ronald J. Ruben, a graduate of Montclair High School. The monument stands by the High School.

Since 2002, Russo and others have gathered at the Watchung monument every 9-11 to remember those lost and the bravery of the first responders.

Russo reflected on what he learned from 9-11. The event reinforced his respect for first responders, “firefighters, police and EMTs–the people who do this type of work, you never know when a tragedy like 9-11 is going to call upon them to give their lives.” 9-11 also showed Russo the power of people helping one another.

“We have so much conflict today. The conflict among our society and in politics, people unwilling to talk. A lesson from 9-11 is to communicate, help each other and work together.”