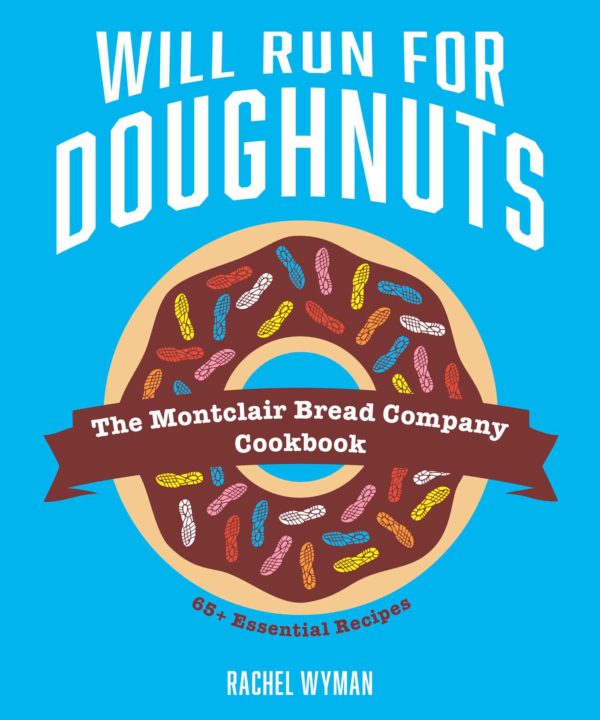 The introduction sets the narrative tone for the cookbook, sharing the history of how Montclair Bread Company (MBC) became Wyman’s second home surrounded by scrambling successes, heartbreaking setbacks, and the growth of a sustaining community. Those who have enjoyed doughnuts from MBC will marvel at the origin story of how the first batches of doughnuts came to be. Many of the events and people mentioned in the introduction make more detailed appearances later, setting up later recipes. With a skillfully used box of baking soda, Mombo (of the MBC staple Mombo’s Carrot Cake) saves her granddaughter, an 8-year-old Rachel, from burning down the kitchen.

Will Run for Doughnuts moves easily between baking techniques, memory, humor, and confessionals, and the result is a tasty collusion between the reader and baker. The side-bar tales, like an imagined and all-too-relatable response to someone who believed that owning a bakery would be “fun” and “easy” compared to corporate life, manage to be at once instructive and entertaining. And profoundly, details surrounding Rachel’s hip-shattering bicycle accident infuse directness and self-deprecation to emphasize the power of community and putting one foot — quite literally — in front of the other.

The accessible, welcoming style throughout Will Run for Doughnuts ensures that it feels like a community collection of intimate kitchen secrets. All that despite sharing recipes that have helped Wyman and Montclair Bread Company rise to national recognition time and time again. More than a reference book for bread, cake, or doughnut cravings, this cookbook demands to be read from beginning to end, whether or not you have intentions of proofing dough, scoring bread, or even pre-heating an oven. It’s a gift.

Rachel Wyman’s cookbook includes over 65 recipes from the Montclair Bread Company, and pulls highlights fresh-from-the-oven recipes created out of Pandemic Necessity beside the tried-and-true recipes Rachel has spent three decades perfecting and are now the backbone of her bakery.

Author Rachel Wyman spoke with Baristanet about Will Run For Doughnuts, which is available for purchase at Montclair Bread Company, local bookstores, and all online outlets.

Baristanet: The recipes are organized into Childhood Favorites, Breads, Doughnuts, Community Favorites, and Recipes from Quarantine. It’s a balance of memory and community. How did you decide on the sections and which recipes to use in each category?

It was the natural progression through my baking journey from where I started to where I stand today. It traveled across the perfect timeline.

Baristanet: Thanks to the deeply personal stories included in the cookbook, WILL RUN FOR DOUGHNUTS reads much like a memoir. It feels like a late night talk with delicious treats to snack on. Did you start out intending to share so much, or was that something that developed slowly?

Thanks! That’s what I hoped would come across to the reader/baker. When I was recovering from my bike accident, 3 years ago, I started to write a collection of essays which I wanted to publish as a memoir with recipes included at the end of each chapter. My publisher wanted to see a book heavier on the recipes with essays at the beginning of each chapter and heady headnotes to introduce the recipes, so that’s how it landed.

Baristanet: The cookbook’s photography is by Brad Barket, your fiancé and life partner, and it features gorgeous, sometimes eerie portraits of the Montclair Bread Company building with intimate and personal behind-the-scenes shots of people and food. How was it working professionally with Brad? What is your favorite photo of his? His favorite photo in the book?

I love working with Brad. He gets so excited about the things I’ve created. He sees them in a different light, as the end user/ultimate taste tester. He pushes me to work to my full potential. It inspires me. [In photo shoots,] I don’t love holding the giant reflector in weird positions for what seems like forever, but the rest is great fun. My favorite photo is the apple dumpling pic with the sauce oozing over the bowl and my kids in the background. His favorite photo is the double spread in the middle of the doughnuts lined up on trays.

The best part about having Brad as the photographer was the incredible depth of our archive. Unlike other books which were all shot in a day or two, we have years of Montclair Bread Co photos to choose from. It helps to tell a more complete story and show how deep our roots are in this community.

Baristanet: The stories of how certain recipes came into your life, like many Mombo recipes, “Yana’s Mom’s Granola,” and “Yum Buns,” reveal some vulnerability and a deep connection to friends and family. Others, like “Fritters” and “Cheese Crackers” include hints about your kitchen and cooking personality. What is a recipe that you added for yourself, not necessarily for the reader?

Strawberry Cake from a doctored boxed cake mix was all for me!!! I can’t think of any recipe I would have left out. There were so many that didn’t make the cut…it was hard to choose.

Baristanet: The Quarantine section of the book feels all too recent, but also very far away for those of us who followed the challenges and waited in perfectly distanced lines for produce and bread. It’s almost like it’s preparing us for the next time around. How/why did you decide to include so much detail of that time in the book?

In the 10 years since I first opened Montclair Bread Company, I’ve never felt as connected to my community as I did during the pandemic. I interacted with everyone from behind a computer screen with these notes and pictures and recipes. In fact, it was because of the interactions on social media, with the recipes I shared, that my publisher wanted to get behind this project. I couldn’t NOT include this piece of MBCo history.

Baristanet: Which is your favorite product at MBC?

That’s like asking me which of my children is my favorite! Not fair! I have a really hard time walking by a tray of Yum Buns without grabbing one. I grew up eating toast with butter, cinnamon & sugar on top – the Yum Buns are like a taste of nostalgia, comfort, and home in every bite.

Baristanet: What is your guilty pleasure junk food or quick-buy snack?

Tastykake Kandy Kakes. Mombo used to pack them in my lunches. I didn’t realize they were a regional brand until I went to college in Florida and couldn’t find them. I grab them whenever I see them. On the savory side, I love Herr’s Old Bay Chips – also a regional treat. And scrapple – I don’t care what’s in it; I love it just the same.

Baristanet: Most people hate hearing lines like “What doesn’t kill you makes you stronger” when they’re going through challenging life events. You’ve been through a lot of major life challenges, is it true? Do you feel stronger having come out on the other end? Or, what would you say instead?

I HATE that phrase with a passion even it I do find it to be true. I would not be the person I am today without having to overcome the adversity life has thrown my way. But, next time you think about saying those awful words, you could say, “How can I help ease your burden?” instead. ‘How can I help?’ is the perfect way to say that you care and you know it sucks, whatever ‘it’ is.

Baristanet: Is there something that didn’t make it into the book that you wish were there? Want to share? This can also include a photo that was cut, if Brad is willing to share it.

I had a few savory recipes (carnitas, Mombo’s meatloaf, crab cakes…) I wanted to include but they just didn’t logically fit anywhere. I’m saving them for the next book “Family Meals from Montclair Bread Company.”

Baristanet: What do you hope readers will take with them from WILL RUN FOR DOUGHNUTS?

I want these recipes to be approachable so that readers challenge themselves to bake something they might have been too afraid to try before. I want them to know they have a friend baking beside them. I’ve made all the mistakes, so they don’t have to – they get the tried and true version!