“I am going to embrace this town and the people who work for our benefit and the friends that I have made since and the neighbors that have come and gone, God bless you and thank you.” — Diana Stewart, wife of Montclair 9/11 victim Michael Stewart.

Stewart spoke Saturday at a ceremony at Watchung Plaza Saturday, sharing how Montclair came together on 9-11, and how she was visited and consoled by Montclair Councilor at Large Bob Russo, who at that time was the mayor of Montclair on September 11, 2001. 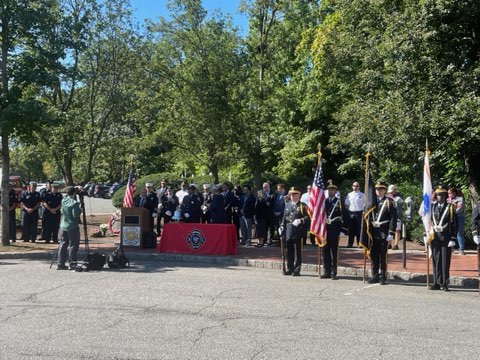 Stewart expressed special thanks to the Montclair first responders who not only held it together but volunteered at Ground Zero.

Russo spoke about how the memorial came to be and how residents and officials have gathered every year since, to remember those lost 9-11 and the bravery of the first responders.

“We all have to come together and unite as a country, not be divided by partisan politics. Please lobby the senate, the congress for permanent relief and help for all those still suffering,” said Russo, of those affected by working at or living near Ground Zero.

Montclair Mayor Sean Spiller spoke about the range of emotions — surprise and shock, followed by fear and anger and finally loss — that people experienced on September 11, 2001.

“We also saw and came to appreciate the courage that we saw from our first responders. We saw it from a nation that came together to rebuild,” said Spiller. “We remember and we will never forget.”