Just days before the South Orange Performing Arts Center was poised to roll out its robust 2021-2022 season, Hurricane Ida ravaged the nonprofit theatre, as well as the surrounding downtown area. In the days immediately following the storm, SOPAC announced that all September shows would be rescheduled. Now, following a more thorough assessment of the building, it has been determined that SOPAC will need to close its lobby and the Jennifer & Tony Leitner Performance Hall to the public through at least December 7. The theatre expects to hold its first mainstage show of the season on Thursday, December 9 with singer-songwriter Martin Sexton. 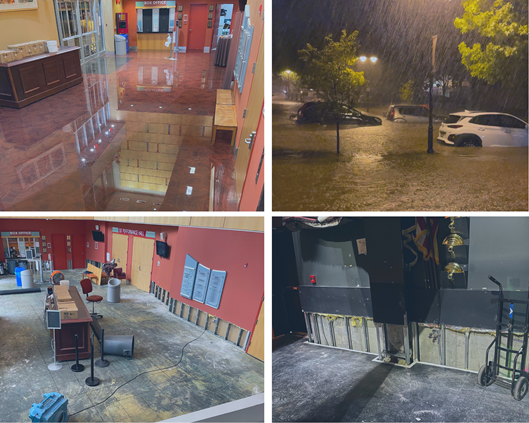 To recap, there was a performance at SOPAC on September 1 when Hurricane Ida reached the region. The show ended early, but three SOPAC staff members remained on the premises overnight. They provided shelter and assistance to NJ Transit train passengers and immediately responded to water coming into the building through the lobby doors, windows and roof. While working to save the building, the flood waters reached their personal cars in the NJ Transit parking lot. These three vehicles were submerged and ultimately totaled.

After the storm passed, SOPAC announced that it would postpone its September shows with the optimistic goal of reopening on October 1.

Ongoing/continued examination of the building by storm remediation experts identified far more extensive damages than originally anticipated. The carpeted lobby was completely flooded with approximately 6 inches of Category 3 storm water. The water went into the theater, running down the raked seating area and collecting in the orchestra pit. The water soaked the walls in the lobby and theatre up to about two feet high. The stage was saturated in one area and it is currently unknown how much water remains underneath. The stage is in the process of being dismantled to continue damage investigations. The roof leaked in several areas. The public and service elevators were flooded. The loading dock sustained significant water damage. Mold was found under the wallpaper in the lobby. A sound board was damaged and determined a loss.

An emergency mitigation company has determined that the flood water in SOPAC is Category 3, meaning it was contaminated with sewage. By law, a Certified Industrial Hygienist will assess the level of contamination in all affected areas.

The Show Will Go On

As of September 22, SOPAC will close its lobby and mainstage theatre to the public through December 7. Current ticket holders will be notified about cancellations and postponements. Patrons can visit SOPACnow.org/storm-update for the latest information.

At this time, the SOPAC Gala scheduled for Saturday, November 6 will still take place. SOPAC is working to move the fundraiser to an offsite location that will be announced soon. Check SOPACnow.org/gala for updates.

The nonprofit venue expects to begin its 2021-2022 season on Thursday, December 9 with a performance by singer-songwriter Martin Sexton.

In the interim, SOPAC still has entertainment for patrons to enjoy.

Laughs in the Loft with host Joe Larson will continue. This standup comedy series is held on the first Wednesday of every month in SOPAC’s 2,100-square-foot loft space on the third floor of the building. The next performance will be Wednesday, October 6.

The Herb + Milly Iris Gallery ushers in a new and exciting season of exhibitions with artist Curtis Grayson, III. His solo exhibit, Transitional Energy: Form, Shape, Color, will be on view from September 23-November 21. The gallery space is located on the second and third floors of SOPAC.

The Village at SOPAC, a movie theater run by CinemaLab, is under the same roof as SOPAC. The movie theater remains open and offers the latest blockbuster and independent films.