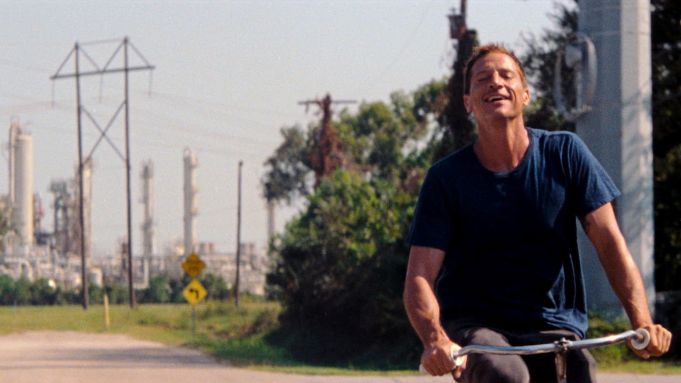 Agree to work with Sean Baker, who’s known for casting non actors in his movies, and you never know what will happen next. That unpredictability carries over into Red Rocket a winning mixture of a comeback story, everyday people, and professional actors that screened at the Montclair Film Festival.

Mikey’s wife Lexi (Bree Elrod) sees through his bull but is drawn to him. There’s a smoldering and sometimes explosive chemistry between Lexi and Mikey that propels this Texas twister forward. Lexi, her mother Lil (Brenda Deiss) and Mikey’s pot supplier June (Brittany Rodriguez) add authenticity that contrast with Mikey.

After being turned down for a number of jobs, Mikey resorts to what he did in high school–sell pot–to fuel his dream and pay rent to Lexi and Lil. Soon Mikey is flush with cash and treats Lexi and Lil to doughnuts. While at the Donut Hole he’s smitten with Strawberry (Suzanna Son) a fetching redhead who becomes Mikey’s new love interest and a cog in his comeback plan. Son is luminous as a local girl looking get out of her dirty small town. She’s entranced by Mikey and his promises of getting paid for having sex with him.

Since Mikey doesn’t have a car, he uses a bike and sponges rides off his neighbor, Lonnie (Ethan Darbone). Lonnie is an eager audience for Mikey’s yarns about his adult film exploits and the lavish lifestyle he once lived.

The film takes places during the 2016 U.S. presidential election. In one scene you can overhear Trump saying, “America is full of doers” which seems to be a sly reference to Mikey.

Like the Florida Project, Baker populates Red Rocket with a colorful cast of characters. Visual color permeates this film too. Cinemaphotographer Drew Daniels contrasts the drab palette of Lexi’s house with vibrant colors from the world of Strawberry.

Baker directed, co-wrote, and co-produced the film with his team led by Chris Bergoch and Shih Ching Tsou. Red Rocket received a standing ovation at the 2021 Cannes Film Festival. If you liked Florida Project or Tangerine, check out Sean Baker’s Red Rocket, scheduled to hit theaters on Dec. 3.