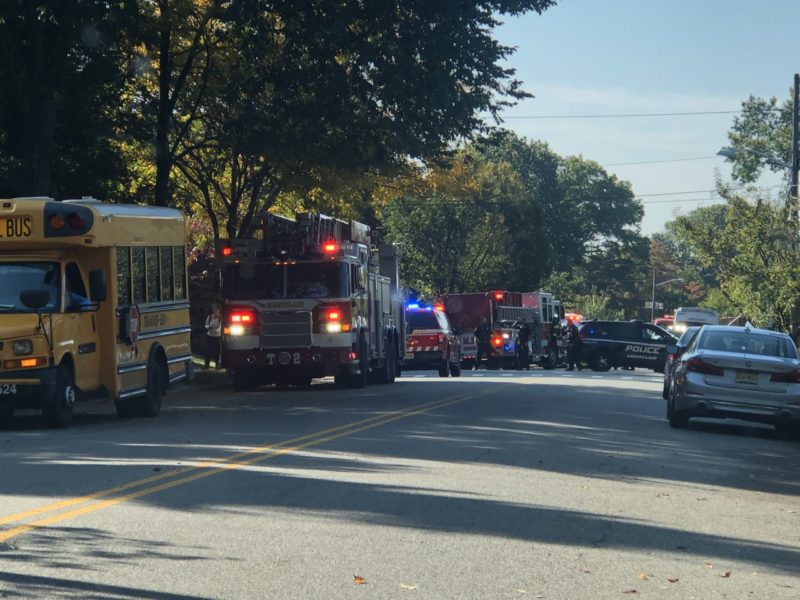 Montclair, NJ – Montclair Police updated their report on the incident involving a school bus that struck a utility pole Friday morning on Park Street in Montclair, north of Watchung Avenue, near Wildwood:

On Friday October 15, 2021 at 9:06 AM, Montclair Police responded to the intersection of Park Street and Wildwood Avenue on a report of a motor vehicle accident involving a school bus.

Preliminary investigation indicates that the driver of a 2008 Toyota Rav 4 (operated by an 85- year-old male from Belleville, NJ) was driving west on Wildwood Avenue when it entered the intersection with Park Street and struck a school bus, which was travelling south on Park Street. After the initial collision, the school bus (operated by a 54-year old female from Haledon, NJ) mounted the western curb, struck a utility pole and a fire hydrant before coming to rest. At the time of the collision, the bus was enroute to the Hillside School (elementary school in Montclair located at Hillside Avenue and Orange Road) and was occupied by 15 juvenile students as well as an aide.

The Montclair Fire Department, Montclair Ambulance Unit, as well as EMS units from Glen Ridge, Bloomfield, and Cedar Grove also responded to the scene. Representatives from Hillside School, including the school nurse, were also on scene.

All students were assisted off of the bus safely and each student was evaluated by EMS. There were no injuries reported to any of the students and none were transported to the hospital. Each student was released to a parent on scene.

The school bus aide (60-year-old female) sustained a swollen knee and was transported by ambulance to Clara Mass Medical Center in Belleville, NJ.

The driver of the bus complained of head, neck, and back pain and was transported by ambulance to St Joseph’s Hospital in Paterson, NJ.

Both vehicles were towed from the scene. PSE&G responded to the scene to replace the damaged utility pole.

The driver of the Toyota received two summonses for Failure to Stop/Yield as well as Careless Driving.

The accident remains under investigation.

At 9:08 AM today we were informed that Bus No 610 on its way to Hillside was involved in an accident at the corner of Part St. and Wildwood. Everyone who needed medical attention received it by first responders and families and caregivers were notified. Hillside nurse and administration were on scene to assist. Emergency medical personnel have confirmed that no children were transported to the hospital; however, some families on site reported that they would take their children to doctors for follow-up. Unfortunately, an ambulance on scene took both the bus driver and aide to the hospital.

We are appreciative of the quick response of the Montclair Police and Fire Departments, Emergency Responders, MPS Transportation Department, Hillside Nurse and Administrators, District Administration, and especially the safety measures taken by the bus driver. We will be following up with our families throughout the day.