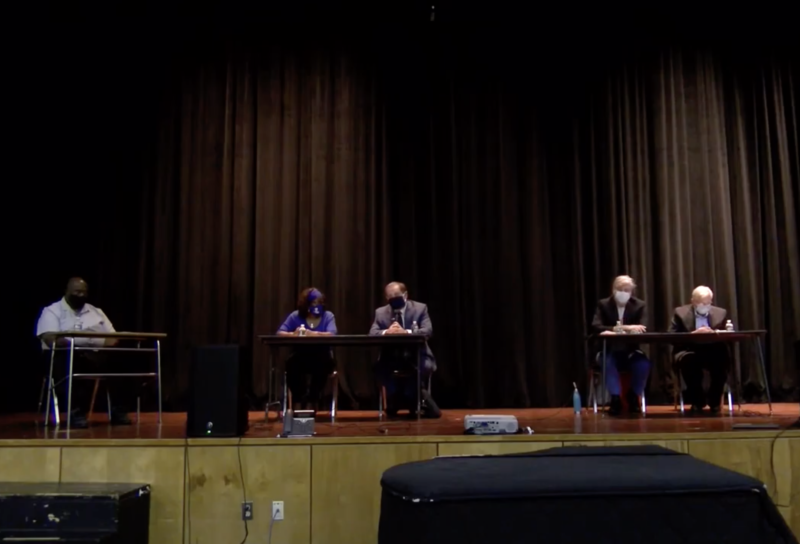 Dark money, diversity and accountability were some of the topics explored at a panel discussion on the upcoming Board of Education (BOE) election referendum. Fourth Ward Councilor David Cummings held the event at Glenfield Middle School auditorium on Monday, October 25. The panel included:

Robert Benecke –Township Financial Consultant who has worked with Type I and Type II Districts. Benecke has written five textbooks on municipal management and has taught at Rutgers.

Johanna Wright – has taught and coached in South Orange for 30 years. She is a three-time elected member of the South Orange-Maplewood BOE.

Benecke was attending the panel to lay out some facts, provide information and answer questions. Wright and Gill said they were sharing their personal opinions and did not represent any organization. Mr. D’Amato advocated for an elected BOE.

The Rev. Craig Dunn, Executive Director of Montclair Neighborhood Development Corporation, moderated the discussion, done in a question-and-answer format. Below are highlights.

Q: What impact do you believe the elected school board will have on the Montclair school system?

Before addressing that question, Dan Gill spoke about the factors that ushered in this referendum.

“The first was the COVID pandemic because it revealed a lot of deficiencies with school buildings’ ventilation systems. The second was the revolving door of school superintendents,” said Gill. The lack of stable leadership has adversely impacted the BOE’s ability to solve problems, according to the teacher.

Two other factors eroding faith in the BOE have been addressing the opportunity gap and budget challenges, according to Gill. “There’s been almost a sense of putting fires out as we go along. And that has really gotten us to the position where we are, where we’re starting to doubt whether and appointed board works and whether an elected board would be better.”

Gill concluded his answer by saying, “personally, looking at an elected board is not the solution. I don’t think that it’s going to solve the four problems that I pointed out.”

For D’Amato, the impact of an elected board would be a game changer. “I think it will lead to more transparency, more accountability, more responsiveness…Right now, the school system here is extraordinarily nontransparent. People, parents spend a lot of time trying to figure out what’s going on asking basic questions of each other.…We don’t know who runs the schools.”

BOE responsiveness is a critical component, according to D’Amato. “We have a new generation of political behavior that’s been inculcated especially through the use of smarts phones where people expect to be in touch with the people who govern them. And not to have this hermetically sealed college of Cardinals–which is what we have…. We just want to have a more normal situation that is going to be accountable.…. It will provide independent oversight and independent control of a system as it is done almost everywhere else in America,” he said.

Q: Mr. Benecke, you have experience with both types of districts, could you give us background on each?

Johanna Wright followed Benecke with her thoughts. “The elected board has the same problems that folks are complaining about in Montclair. Plus, and elected board structure adds a lot more problems,” she said. Wright recalled that after she was elected to the board, she noticed it was “a system that was filled with cliques. With people with special interests, people who had a lot of money and with money comes control. So, you have to ask yourself, with an elected board what audience have you eliminated? In terms of an appointed board, you know that there is an audience. But once you cross that threshold it’s very hard to go back…. An elected board is not going to change much for you. As a matter of fact, it will set you back 50 years.”

Q: Mr. D’Amato, you mentioned something about lack of transparency. How would an elected board guarantee transparency?

“When people are elected, they’re accountable,” said D’Amato. “You run for an office, you go to the supermarket, people stop to talk to you. You’re accountable to the town…. We look at South Orange and Maplewood, these are our sister cities. I agree with coach Wright. We will see a lot of these issues, but we will at least be able to vote. We will have some degree of agency and autonomy. Maybe the system worked before…but it’s time to graduate and have a normal local democracy like everybody else does. I think we can do that.”

When the moderator asked Gill if he had anything to add to this conversation, Gill responded by talking about how companies might spend money on a BOE election as a way of cultivating potential business from the district.

“There’s always a quid pro quo,” said Gill. “You give me money; I’m going to get elected and then I will help you with particular contracts when it comes time for us to award contracts…These are some of the concerns I have. That financial pressure would come down to bear on the decision making in an elected board.”

D’Amato disagreed. “Having nine board members that are individually elected absolutely brings down the value of money in the process.”

Q: With an elected board, how do you ensure diversity to support all students in the school district?

“There’s some evidence in the state where certain groups within a particular community have been very good at getting the vote out and getting elected people who support the positions of a specific group to the detriment of the rest of the community,” said Gill. “That’s really something we have to be concerned about.”

“So, I think this was one of the strongest seeming arguments against moving to local democracy in this area,” said D’Amato. “The idea that diversity representation on the board would be negatively impacted. And I felt that way at the beginning…But the more I looked into it, that argument just vaporized…. We looked at South Orange and Maplewood as the comparison town. I went to look at the board and discovered there wasn’t a single white male on that board… It was more diverse than our board. And it had diversity of experience and professional background.”

Later in the evening Wright spoke about another kind of diversity critical to a successful board of education. “The best boards are the ones with a diverse skill set. Not just diversity of people. You need Finance, construction, education, personnel. You can get that with an appointed board.

Benecke replied that bus standards are determined by age and distance from the student’s house to the school. “Here you have an expectation for student transportation. I don’t see transportation being reduced in terms of cost to increase other instructional areas,” he said. Gill said maintaining the integration of the school district through busing is vital. D’Amato said that busing in Montclair is “sacrosanct.”

One attendee asked about the purview of the Board of Education.

Benecke explained the BOE votes on the budget, on contracts, and they vote on personnel decisions at the board of education. Wright added that the people in power can dominate the issues with the district. “It’s just a small percentage of people that can drive things like in the South Orange Maplewood school district. So that’s a real concern. The other thing you have to look at is voter apathy and people being informed. Education is too important today,” she said.

An attendee asked how the new voting process would be implemented if the election referendum was passed.

Fourth Ward Councilor Cummings explained what would happen next. The BOE would be expanded from seven to nine members. Then there would be an election in January or March for those two seats, but the term for those two seats would only be for one year. For the three BOE members with terms ending in May, those individuals have a choice of remaining on the board until November when the next election will come up. However, if one or two of those members do not want to stay on you then have to find people who would run, or the board would have the right to appoint people to replace them. If the board cannot come to a consensus on the replacements, it goes to the county superintendent who then will appoint the number of members needed. You will ultimately have to get to the three-staggered system where every year you will be voting on an election for board members.

Another attendee mentioned that the folks supporting an appointed board don’t seem to want to address the fact that people want change.

Whether or not the township should vote in members of the Board of Education will be on the ballot. Make your voice heard. The General Election is Tuesday, November 2. Early voting will be open until Sunday, October 31. For more information, click here.