If you’ve never seen Next to Normal, you’re in for the emotional roller coaster ride of your life with this story of how one suburban household copes with crisis and mental illness. If you’re no stranger to the musical, Vanguard Theater Company’s production will cause you to see it anew, with fresh nuances and messages. 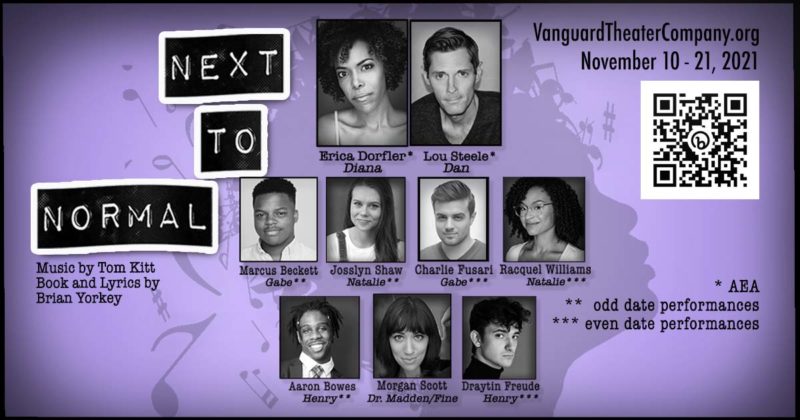 The themes of Next to Normal are universal; there is something in this show that will resonate with everyone. But casting a black actor as Diana, immediately changes the narrative of this piece. In our story, the family confronts not only grief, depression, suicide, drug abuse, ethics in modern psychiatry, and the underbelly of suburban life, but they face these momentous issues while existing as an interracial family in a predominantly white suburban neighborhood.

In addition to casting a black actor as Diana, I also took an experimental approach when casting the teenagers within the piece. Diana and Dan’s son and daughter Gabe and Natalie have been double-cast with both black and white actors. It’s been interesting in the rehearsal room observing how shifting the complexions of the actors tells a very different story – even with the same text.

In the African American community, mental health issues are often compounded by the psychological stress of systemic racism, which, though not written into this story – is certainly a major part through our color conscious casting.

Dorfler made her Broadway debut in the 2010 Tony Award‐winning hit Memphis, followed by several Broadway performances including in the Tony, Grammy and Olivier Award‐winning The Book of Mormon, the original Broadway cast of Natasha, Pierre and the Great Comet of 1812, nominated for 12 Tony Awards including Best Musical, and the West End transfer of Jack Thorne’s adaptation of A Christmas Carol, which recently won five Tony awards. As she dives into the role of Diana, she describes her feelings about exploring the intersection of mental health and her experiences as a black woman in America:

I am so excited to explore the intersection of challenges and privileges that a multiracial woman in this position in life experiences. As someone who has lived in and moved through predominantly white spaces in my life, I have experienced the challenges of feeling out of place, feeling unheard, and feeling as though you can’t explore your true self because of the environment around you. If you add the challenge of a mental disorder, especially one as severe as Diana’s, the result is an incredibly complex character and story.


Vanguard’s mission of changing the narrative through theater dedicated to DREAM – Diversity, Reciprocity, Education, Activism and Mentorship, is front and center in this production. One of the hallmarks of Vanguard’s success is partnering with non-arts organizations. For Next to Normal, Vanguard is partnering with the Darkness Rising Project, a mental health awareness 501(c)3 nonprofit offering free community wellness workshops to inspire conversations about mental health, address issues which directly affect the Black community, connect attendees to resources, and erase the stigma. Several of the performances will be followed by talk backs with health care professionals.

In choosing Next to Normal as its premiere Mainstage show in its new theater, Vanguard was mindful of the disparities in diagnosis and healthcare for mental illness. According to the American Psychiatric Association’s Mental Health Facts for African Americans, while the rate of bipolar disorder is the same among black Americans as it is among other Americans, black Americans are less likely to receive a diagnosis and, therefore, treatment for this illness. fAnd black adults are also less likely to receive guideline-consistent care, less frequently included in research, and more likely to use emergency rooms or primary care (rather than mental health specialists). Stigma and judgment prevent black and African American people from seeking treatment for their mental illnesses. When black Americans do seek treatment, they are offered medication or therapy at lower rates than the general population.
Vanguard hopes that by presenting Next to Normal in the context of a diverse family, this production will shine a light on these disparities and share valuable resources for those who need care. Tickets are now on sale at bit.ly/normalVTC. For more information, visit www.VanguardTheaterCompany.org