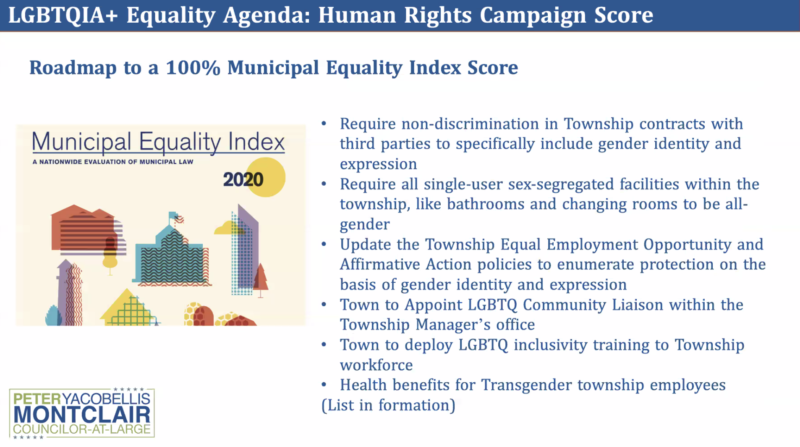 Montclair, NJ – The Human Rights Campaign released the 2021 Municipal Equality Index for communities across the United States and Montclair jumped a whopping 22 points to reach a perfect score of 100, joining Jersey City, Hoboken, and Princeton as a perfect score municipality in the State of New Jersey.

“We didn’t do this incrementally – we dreamt big, went for it and then knocked it out of the park,” said Councilor Peter Yacobellis who also serves as Founder and President of Out Montclair.

Yacobellis, Montclair’s first-ever openly LGBTQ+ elected official, took the lead on the town government’s enactment of a sweeping LGBTQ+ Equality Agenda last winter. That agenda successfully enacted new laws to protect people on the basis of gender identity and expression in township procurement and hiring practices and required that all single-user restrooms in the Township be designated as gender neutral by Dec. 19th, 2021. The effort also included designating a LGBTQ+ Community Liaison at Town Hall, re-affirming the state’s ban on conversion therapy, flying a progress pride flag at Town Hall and supporting LGBTQ+ teens and seniors with public programming.

Additionally, with the creation of Out Montclair by Yacobellis and Montclair Civil Rights Commission Members Madeline Gale and Reubena Spence, which specifically supports teens and seniors, the Township received additional credit in the scoring. Yacobellis’ 2020 election to the Township Council and the government’s overall support of the LGBTQ+ community led to the receipt of additional points as well.

“LGBTQ+ people are everywhere—in every city, county and ZIP code. Throughout its 10 year history, the Municipal Equality Index has been centered on supporting and celebrating the work municipalities do to serve LGBTQ+ people in the places they call home,” said JoDee Winterhof, Human Rights Campaign Senior Vice President of Policy and Political Affairs. “This year, state-wide lawmakers have zeroed in on attacking transgender and non-binary children—for no reason other than in an effort to harm and erase them. Local leaders, however, have continued to move the needle of progress forward, and by doing so, they have spurred economic growth by signaling to residents, visitors and employers that their city is open to everyone.”

The Human Rights Campaign is the largest LGBTQ+ civil rights organization in the United States and annually scores towns, cities, corporations and other institutions on their efforts to create inclusive and safe environments for the LGBTQ+ community. Previous scores for Montclair were as follows: 2020: 78; 2019: 71; 2018: 58. 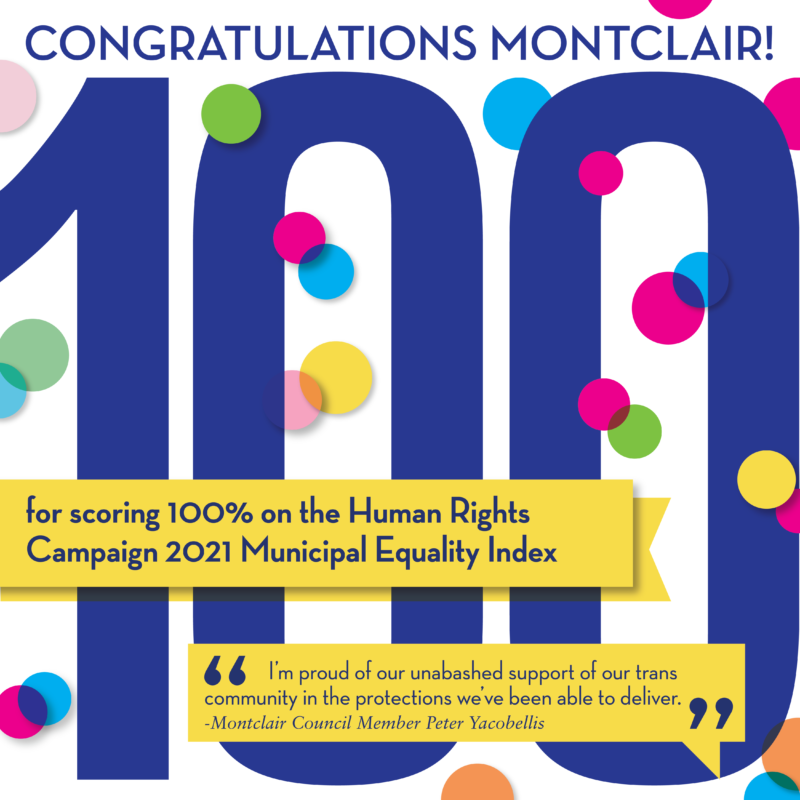 “Sometimes elected officials get credit for carrying the baton across the finish line. But I want to be clear that this has been a years-long relay. In no particular order I must thank the people responsible for sparking this journey: everyday citizens and specifically members of the Unitarian Universalist congregation who saw this as a red flag years ago and embarked on an effort to work with our township staff and government to move the needle.”, said Councilor Peter Yacobellis. “I also want to thank several specific Montclair Township employees: Town Manager Tim Stafford and Township Attorney Ira Karasick for their steadfast and unabashed support; Officer Glenda Rivera for her work as the Montclair Police Department LGBTQ+ Community Liaison and Bruce Morgan, our Affirmative Action Officer and LGBTQ+ Community Liaison and their colleagues who have been leading this work for years. I also want to thank my colleagues on the Council who supported the bulk of what created improvement here, but in particular: Councilor Bob Russo, Councilor Lori Price Abrams and Mayor Spiller for their enduring support and contributions to what is now a perfect score!”

“This is a really great moment for the trans community in Montclair. I want to thank Councilor Peter Yacobellis for his leadership in pushing the equality agenda and for the support Mayor Spiller, Councilor Price Abrams and Councilor Russo lent to its complete enactment,” said Celeste Fiore, Founder and Chair of the (Montclair-based) Trans Affirming Alliance and Board Member with Out Montclair. “While we celebrate the enactment of protections in Township hiring and procurement practices and in the requirement for gender neutral restrooms in Montclair, I also hope that the Township will look to include gender affirming healthcare in its policy for its workers in the years ahead as well as creating more services to make sure this most marginalized community is further supported.”

“This is a terrific moment for Montclair and in particular our LGBTQ+ community. I commend all of those who have fought for full equality under the law for all people and saw through the enactment of multiple changes to law and policy in the Township. In particular I want to thank two of my fellow Civil Rights Commissioners, Madeline Gale and Reubena Spence, for their unyielding efforts to raise awareness and push for change. I also want to thank Councilor Peter Yacobellis who showed why having a seat at the table truly matters,” said Christa Rapoport, Chair, Montclair Civil Rights Commission.