Home Arts SOPAC Has A Comedy Cure for Midweek Blues

Masks, kids and work can sometimes make life feel claustrophobic. New Age healers might tell you to breathe deeply. Maybe you just need some Laughs in the Loft.

Whether it’s a date night with your spouse or having a few beers and laughs with your friends, come see some of the funniest comics in New York and New Jersey every first Wednesday of the month at SOPAC. Plenty of restaurants in the area to grab a pre-show bite before heading up to the Loft. 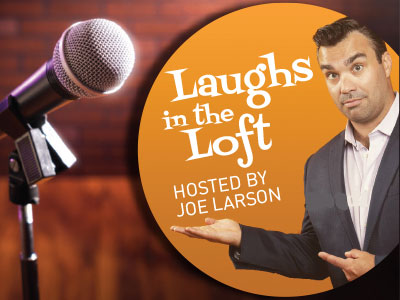 Comic Joe Larson (WE network, Sirius XM radio) hosts a show with several other comedians serving up the laughs. And you never know who else is going to show up.

When Joe met his wife she loved how much he made her laugh. He warned her that while she finds it cute now, she may feel differently when he is unable to do anything but joke during the heat of an argument. As his wife eventually found out “you’re funny all the time!” can quickly turn into “Does everything have to be a joke?”

Doors open at 7 p.m. The show is recommended for ages 18 and up. Laughs in the Loft is a tight set, so you’ll be able to have fun and be home before 11. Beverages and concessions are available (credit card only). Click here for ticket information.

Catch SOPAC’s next installment of Laughs in the Loft on Wednesday, December 1 at 7:30PM. Tickets are $20. The lineup includes:

Ophira Eisenberg is the host of NPR’s Ask Me Another. She’s participated in the Montreal Comedy Festival and has appeared on Comedy Central, HBO and The Late Late Show with Craig Ferguson.

Harry Terjanian, a New Jersey-bred comic, has been a part of the Chicago Just For Laughs Festival, the Great American Comedy Fest and was the winner of the Andy Kaufman Award.

Linette Palladino, another Garden State native, recently beat out hundreds of comics to make it to the final four of the HBO Latino Stand-up Competition.

Rich Aronovitch is the Tasmanian devil of comedy. His rapid style leaves rooms laughing so hard that no one can pinpoint what happened, they just know they loved it. Rich has been seen on WE network, the Playboy Channel, The Tonight Show with Jay Leno and heard all over Sirius XM radio.