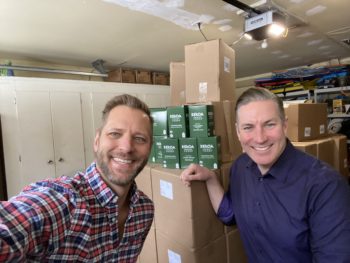 2020 was a rough year for many small businesses, Kekoa Foods included. West Orange dads Daniel Auld and David Fullner launched the organic baby food company with a successful Kickstarter campaign in 2018 and by 2019 they were testing their products for shelf stability and getting them ready for packaging. With both dads still working full time and caring for their then first grader, they realized that one of them would need to devote himself to Kekoa Foods full time.

We all know what happened next.

“So March comes along and the co-packer we had lined up, the pouch manufacturer we had lined up, everything was just falling apart because they were struggling to serve their biggest customers and they didn’t have time any more for the new guys who had a lot of questions,” Auld said. “It was a rough time.”

Along with the rest of the world, Auld and Fullner were also now home full time and trying to help their son with his remote schooling. But it also gave them the opportunity to regroup and figure out how they could still make their fledgling company work. 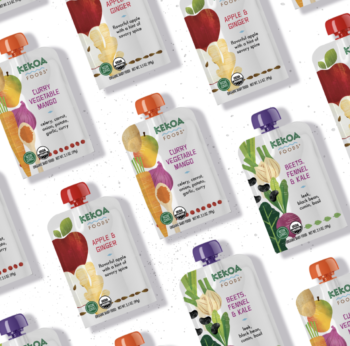 Ultimately, they found a new co-packer on the West Coast who became a very supportive partner and answered all their questions. Based on the co-packer’s input, Fullner, whose experimentation with cooking for their son when he was an infant drove the creation of Kekoa Foods, reformulated some of the recipes to be sure they would be shelf-stable. In 2021, as they began to identify some new ingredient suppliers, they ran into some supply chain issues.

“Every time we thought we were close to getting started, we’d fall behind because something wasn’t ready or the materials weren’t there,” said Auld.

Finally, everything fell into place, and in December, Kekoa Foods produced almost 100,000 pouches across three flavors. In a major leap forward, they began selling on Amazon this month, with their product in about 35 Amazon fulfillment centers across the country.

The sales are “slowly but surely coming in,” Fullner says. “We’re actually pretty happy with how things are going so far.”

Selling on Amazon and the increase of online shopping due to the pandemic also helped Auld and Fullner see that direct-to-consumer sales was a far more promising opportunity for the company than selling via brick and mortar.

“We realized that the overhead costs that would be involved with trying to go into brick and mortar would be almost a non-starter for us,” said Fullner. “And in this way, by going to Amazon, it reduces that. And then also we can get the product out there much faster. So it just was a win-win across the board.”

The company is now starting its second production and is working to introduce three new veggie-forward flavors by the end of 2022. It is also boosting its social media presence, driving “word-of-mouth” recommendations from friends, family and happy customers.

“It’s been a long journey,” said Auld. “We just ran into so many challenges, including the pandemic, including the supply chain and labor shortages that impacted what we were able to do to move forward. But we did it, you know, we’re here. We have product available for people to purchase. And now we’re looking for the next challenge and the road ahead of all the things we need to tackle as we keep building and improving.”