A hallmark of Ray Charles’ career was bringing together many different genres of music and issues to create a new sound. So it is only fitting that Vanguard is highlighting the important work being done in Montclair by several organizations and businesses, with special performances of A Portrait of Ray.

The Saturday, February 26 performance will honor Covenant House NJ and The Junior League of Montclair and Newark, and “Sleepout Montclair,” happening the following weekend.

On March 4th, Vanguard celebrates the 40th anniversary of Toni’s Kitchen, with a special Ray performance. Charles, who was often steps away from homelessness and food insecurity, would have approved.

The closing performance on March 5th celebrates Montclair Brewery, whose motto is: Building a Stronger Community, One Beer at a Time. In February, the Brewery continued their annual tradition of releasing Black History Month inspired craft beer, and the Ray audience will have a chance to taste them.

Charles was one of the first artists to refuse to play for segregated audiences, and was a staunch supporter of Dr. Martin Luther King, Jr. His pivotal role in the Civil Rights movement, and in crossing countless perceived musical boundaries, is highlighted in A Portrait of Ray.

Tickets, which are limited to provide a COVID safe experience, are on sale for the production, running for seven performances over two weekends only. Attendees have the option to purchase tables for 4, 2, or single seats. Doors open one hour prior to curtain, for time to enjoy cocktails and delicious light fare provided by chef June Williams.

A Portrait of Ray takes audiences on an exhilarating journey back to 1967 at the height of Ray Charles’ career, and is set during a homecoming concert in Greenville, Florida.

Dwayne Clark and Janeece Freeman Clark wrote the show in 2015, as a tribute to Ray Charles, and it has been getting rave reviews ever since, after performances at The Cutting Room and Symphony Space in New York, and Newark Symphony Hall:

Once the lights go off and the sounds of the trumpet and saxophones start to play, you instantly feel as if you time traveled to 1967, at this point you’ll realize that this will not be an average musical. Ray Charles is played by Broadway veteran and “The Color Purple” star Dwayne Clark who played it as if he was the man himself, from the walk to the body mannerisms. — Manhattan Digest

Dwayne Clark single handedly brings the audience to its feet with one show stopping, hand clapping moment after another. Drown in My Own Tears left us standing, clapping, sobbing and wanting more. — GlocallyNewark.com

Dwayne Clark, who portrays Ray Charles, is a Broadway veteran (In the Heights, Rent, Spiderman – Turn Off the Dark, The Color Purple, Tarzan, Smokey Joe’s Café, Urinetown and more) and is about to enter previews for the highly anticipated Paradise Square, which begins previews on March 15 at the Barrymore Theater. Asked what drew him to Ray Charles, Clark says: “There’s something about the spirit of Ray that I connect to for some reason. My dad used to play his records when I was a boy growing up and I really didn’t know what I was listening to back then, honestly. Something about his journey, it’s like when I put on the glasses something just happens to me.”

Tickets for all dates here. 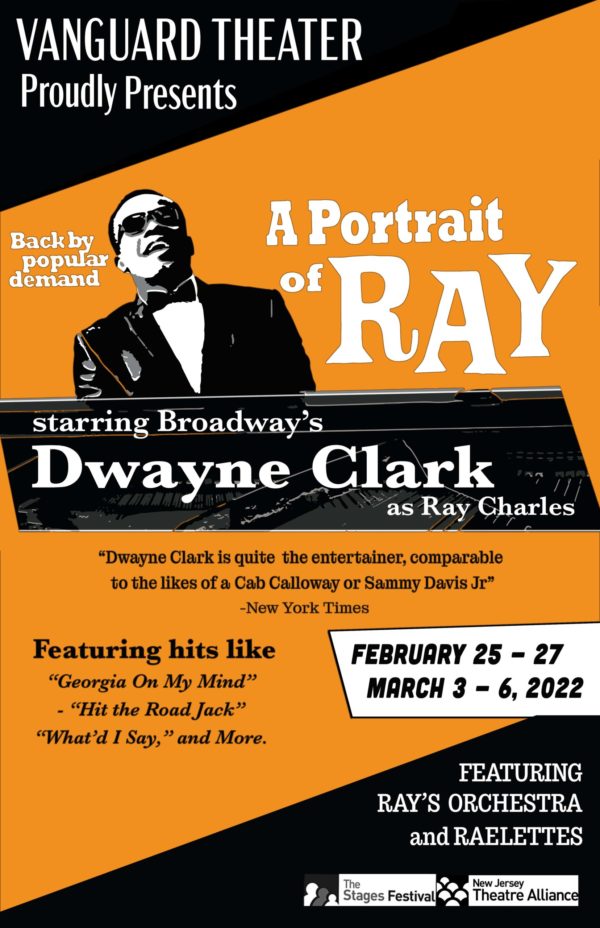