Montclair, NJ – Continuing their annual tradition, Montclair Brewery is releasing a new Black History Month inspired craft beer series this month. This year’s series includes the Aubrey Ale, brewed to honor Montclair’s local icon, Aubrey Lewis Sr., and the ThomSank Independence Ale, in honor of Thomas Sankara, Burkina Faso’s former president and leader. These drinks will be available in its taproom and through limited distribution partners in New Jersey. Montclair Brewery will also have a can release of the Black Mamba Black Lager, in honor of basketball legend, Kobe Bryant. There will be a few surprise limited beer releases in honor of the holiday as well as returning beer styles that are a part of the Black History Month series.

The Aubrey Ale is inspired by Montclair, New Jersey’s local icon, Aubrey Lewis Sr. This local legend lived in Montclair his entire life, starting his impressive athletic career at Montclair High School in 1950, which then continued into college where he was the first African American to be a sports captain at Notre Dame University. After his athletic career, Lewis, Senior, remained a trailblazer being a member of the first integrated FBI class, Vice President at Woolworths Corp, co-founder of Black Retail Action Group (BRAG), and a member of many other boards. This Brown Ale is both sweet and nutty with notes of caramel, honey, and toasted bread. Montclair Brewery is hosting a special Aubrey Ale launch event on February 10th from 5 p.m. to 7 p.m. The community is invited to this public event to taste the new Aubrey Ale, learn more about Lewis Sr. and meet many of his remaining family members. Aubrey Ale will be available in cans, on draught, and growler fills at the brewery or through partnered bottle shops and restaurants.

“Each year we pay tribute to Black History Month through our brews, and I am so excited to get to do it again,” says general manager and co-owner Denise Ford Sawadogo. “I personally knew and was inspired by Aubrey Lewis Sr. early in my career, when I was a member and board member of the Black Retail Action Group (BRAG), which he co-founded.” 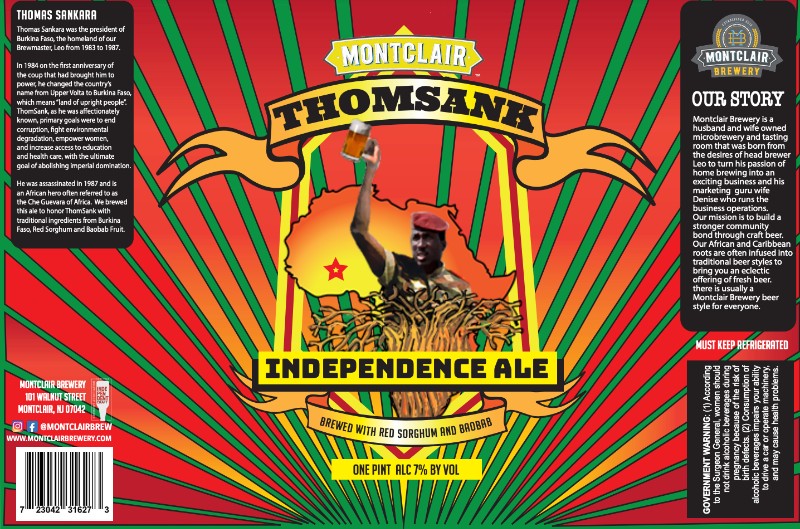 The ThomSank Independence Ale was created in honor of Thomas Sankara, a charismatic leader whose mission was to transform Burkina Faso into a self-sufficient, independent country. Sankara, also known as Che Guevara of Africa, rebuilt the economy, the policies, and created many opportunities for his country. This experimental ale incorporates red sorghum, an ingredient traditionally used in African beers, and baobab, a West African fruit with many health benefits. The ThomSank Independence Ale is expected to be rosé colored and full-bodied with a crisp finish. A public launch event takes place Friday, February 18th, 5:30 to 7:30 pm. Members from several New Jersey and New York based Burkinabé organizations are expected to attend. ThomSank Independence Ale will be available on draught, in cans, and growler fills.

“I spent a lot of time developing the ThomSank Independence Ale. It was important for me to create a recipe that includes traditional African ingredients which is a big part of what Sankara was all about. I can’t wait for everyone to try it,” states head brewer and co-owner, Leo Sawadogo. 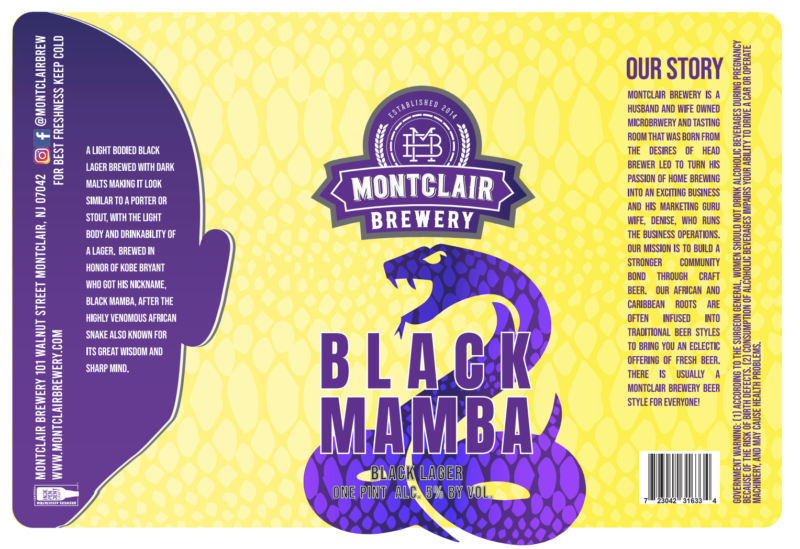 Black Mamba Black Lager was first released last year on August 24th, International Kobe Bryant Day, on draught only. This brew was created in honor of basketball star, Kobe Bryant, who was nicknamed “Black Mamba” during his career. Black Mamba Black Lager has the appearance of a stout or porter with the light drinkability of a lager. This year, Montclair Brewery is giving it its own special can design that will be available in late February or early March in the taproom and through partnered bottle shops and restaurants. The Black Mamba Black Black Lager will be available on draught and in growler fills as well.

“February is an exciting time for us. We get to amplify our efforts to highlight important icons from the African diaspora such as Aubrey Lewis Sr., Kobe Bryant, Thomas Sankara, and others. I get a lot of joy out of researching and reviewing potential heroes to honor” adds Denise.

In addition to the Black History Month beer series, Montclair Brewery will highlight several black artists and/or their music every Friday in February. See list below. There will also be a Feel Good Sip and Shop, on Saturday, Feb. 19th, from 12 to 4, which will feature a handful of black-owned businesses/vendors along with co-organizer, DJ Dan.ce.

Feb. 11- Gabi the Artist: This musician weaves together various musical strands into a new, fresh take on pop music, but pop which is both ripe for mainstream mass consumption whilst retaining an edgy underground vibe… the perfect balance between cult and commerciality.

Feb. 18 – Jarret Walser Pack: A musician that brings vibrant sensitivity and rich nuances to an expressive style on the drums that is refreshing. His ease and versatility in several genres (jazz, rock, R&B, the blues, funk) have made him a highly sought-after drummer.

Feb. 25 – P&H Duo: An explosive Caribbean experience guaranteed to have you dancing!