Montclair, NJ – Cherepovets is one of four Montclair sister cities, but Montclair is looking to end its 30+ year relationship with the Russian city, taking a stance against Russia and its invasion of Ukraine.

Mayor Sean Spiller, in a letter to the Mayor of Cherepovets, condemns the actions of Vladamir Putin and says he is beginning the work of “withdrawing from our relationship as sister cities.” 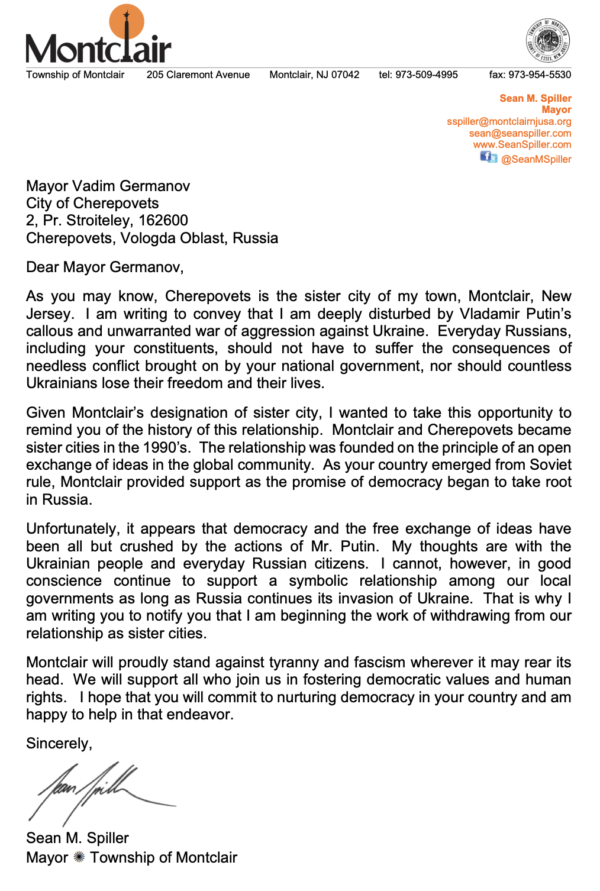 The move to sever or suspend relationships with Russian sister cities is happening all around the country.

Per the town’s website, Montclair’s sister city arrangement with Cherepovets dates back to the dissolution of the Soviet Union. The Montclair-Cherepovets Sister City program grew out of the need to help bring medicine and food to a region struggling to provide its people with these bare essentials.

The first 12 delegates went to Cherepovets in 1990. Since then, Montclair professionals traveled to the city offering training, a number of student exchanges have also taken place, and, through the Montclair Rotary club, several Russian children received life-saving heart surgery in the U.S.

Mayor Jerry Fried hosted delegates from Cherepovets in 2011 and celebrated the 20 year relationship anniversary of the two cities.

In 2020, Spiller made a Youtube video congratulating Cherepovets on its Founding Anniversary, sending greetings and well wishes in Russian.

Councilor at Large Peter Yacobellis, in a statement sent to Baristanet, says both he and Councilor at Large Bob Russo had asked staff to go through the archives to identify the original Resolution that established the relationship in the 1980s, so that they could move to formally pause or dissolve the relationship by Resolution next week. That work is ongoing and would require a vote by a majority of the Council.

“Councilor Russo and I have been discussing what appropriate actions the government can take with regard to Russian ties, including pausing the city partnership with Cherepovets, to our engagement with Lukoil in Upper Montclair to ensuring the Town doesn’t do any business, inadvertently or otherwise, with any Russian or Belarusian citizens on federal sanctions lists. I appreciate the Mayor’s letter, which he shared he was doing, but note that only the Council can formally do this,” said Yacobellis.

“I want to also make sure that we’re taking the opportunity not just to call out Putin’s abhorrent and criminal actions, but to say that we hope there’s a future where we can reestablish ties like this because diplomacy should never stop,” he added.