On Wednesday, May 4, four comics take the stage in the SOPAC Loft.

Cackle, giggle, snicker, chuckle— however you like to laugh, these comedians will have you cracking up. Settle in for an evening of side-splitting comedy during SOPAC’s monthly Laughs in the Loft stand-up series. Hosted by local comedian Joe Larson, each show features several comedians in a New York City-style showcase. Laughs in the Loft is held every first Wednesday of the month.

Emma Willmann – Emma Willmann is perhaps one of the only dyslexic, gender-wiggly comics with ADHD from Blue Hill, Maine. In the third grade, Mrs. Weller would bribe Emma with the chance to tell a story at the end of every class if she promised to stop talking to her classmates. Now, Emma tells stories at The Comedy Cellar, on Netflix’s “The Comedy Line Up,” Comedy Central, and has had multiple appearances on “The Late Show with Stephen Colbert.” Additionally, Emma is an actor best known for playing the role of Beth on “Crazy Ex-Girlfriend.” Emma also has a chart-topping podcast, Inside The Closet.

Ryan Reiss – Ryan’s quick wit and hilarious crowd work have made him one of the most sought-after TV warm-up comics. He has done warm-up for the “M & J Morning show,” “Huckabee,” “CenterStage,” “Fox & Friends” and currently the “The Late Late Show with Seth Meyers.” Ryan is also an incredible stand-up comic and writer appearing on MTV, Comedy Central, The Howard Stern Show as well as a writer and producer on “Jimmy Fallon & Drew Barrymore’s Spring Break Face Off.”

Liz Glazer – Liz Glazer is an award-winning stand-up comedian, actor and writer. Liz won first place in the Boston Comedy Festival and Ladies of Laughter Competition, and has opened for Myq Kaplan and Maria Bamford. Liz was also a part of the Seattle International Comedy Competition and will be a part of the upcoming HBO Women in Comedy Festival. As an actor, Liz has appeared on ABC’s “For Life” and CBS’s “Bull.” Liz is also writing a television pilot about her life, a draft of which was a semi-finalist in the Stage 32 writing competition.

Howie Dewey – Howie Dewey is an up-and-coming stand-up comedian out of NYC and the co-host of the popular financial comedy podcast Cash Daddies. When not busy podcasting, Howie can be seen playing NYC’s hottest clubs. 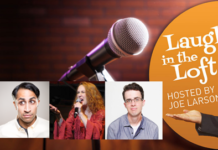 Meet the Lineup: July 6 Laughs in the Loft at SOPAC

MontClairVoyant: Library and Council Are This Column’s Protagonists