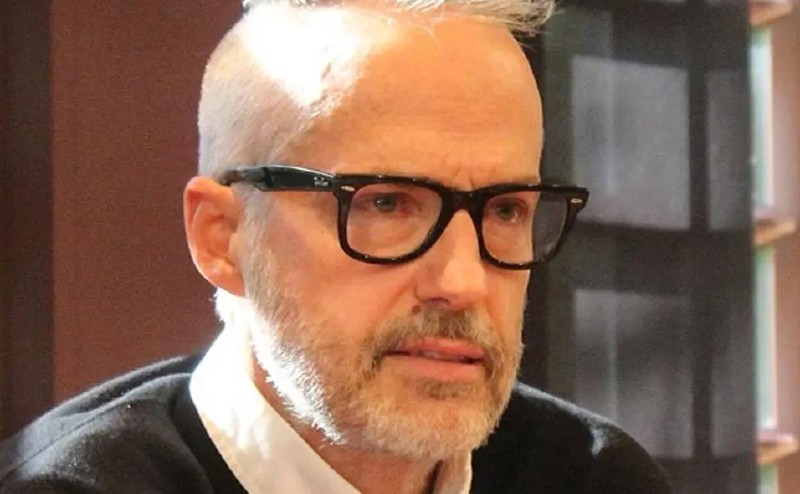 A memorial service for Journalist Eric Boehlert will be held at 1:00 pm on Tuesday, April 12, 2022, at First Congregational Church in Montclair, NJ. In lieu of flowers, the family requests that donations be made to the Eric Boehlert Memorial Scholarship at Montclair High School.

A fierce advocate for truth in the media, Boehlert died in a bicycle accident in Montclair, on Monday, April 4, 2022. He was 56.

Eric Boehlert was born December 6, 1965, in Utica, New York, the fourth and final child of the late Donna Boehlert and Bart Boehlert, Jr.

Eric grew up in New Hartford, New York; Fort Wayne, Indiana; and Guilford, Connecticut, where he graduated from high school and was a star on the basketball team. He earned a degree in Middle Eastern studies at the University of Massachusetts Amherst, where he met his life-long partner Tracy Breslin in Van Meter Hall. In 1993 they were married in a loft on lower Fifth Avenue. Together they raised two children, Jane and Ben, in Montclair, New Jersey. Eric and Tracy loved each other completely for the entire duration of their twenty-nine year marriage. Together they went to concerts, took vacations to Martha’s Vineyard, walked their dogs at Eagle Rock Reservation, and chatted every night on the living room couch.

Early in his journalism career, Eric worked at Billboard and Rolling Stone magazine, then later at Salon and Media Matters. He was the author of two nonfiction books: Lapdogs: How the Press Rolled Over for Bush (2006), and Bloggers on the Bus: How the Internet Changed Politics and the Press (2009). In 2020 he started his own subscription newsletter Press Run and quickly accumulated a large and devoted following. Through his journalism, books, and appearances on CNN and MSNBC, Eric was a powerful defender of democracy, social justice and truth in media. He was uncompromising and brilliant in his investigation of hypocrisies and double standards in the media, and his contribution was priceless.

Eric had many varied enthusiasms and interests as a loving husband, father, sibling, uncle and friend, ranging from basketball, baseball and bowling to music, movies, and theater. He was a longtime member of the Montclair Commonwealth Club where he bowled for twenty years with the Condors bowling team and also coached his son’s baseball team for four years.

Eric was a kind and gentle man, with never a cruel word, but was always strong and brave in his observations of media bias, unafraid to call out the most esteemed media giants in his quest for fairness and equality.
Eric leaves behind his wife Tracy, two children Jane and Ben, three siblings Bart, Thom and Cynthia Boehlert, their spouses, Ted Dawson, Karen Boehlert and Barb Kristofek, and nephews Brian and Aaron Boehlert.