Montclair, NJ – A new synthetic grass playing surface on the Essex County Glenfield Park softball field has been completed. The announcement was made before a high school softball game between Glen Ridge High School and Columbia High School. The new surface provides young ballplayers with up-to-date conditions on which to play and maximizes usage of the field. The upgrades are part of the County’s ongoing initiative to revitalize the historic Parks System to ensure it meets the needs of residents. 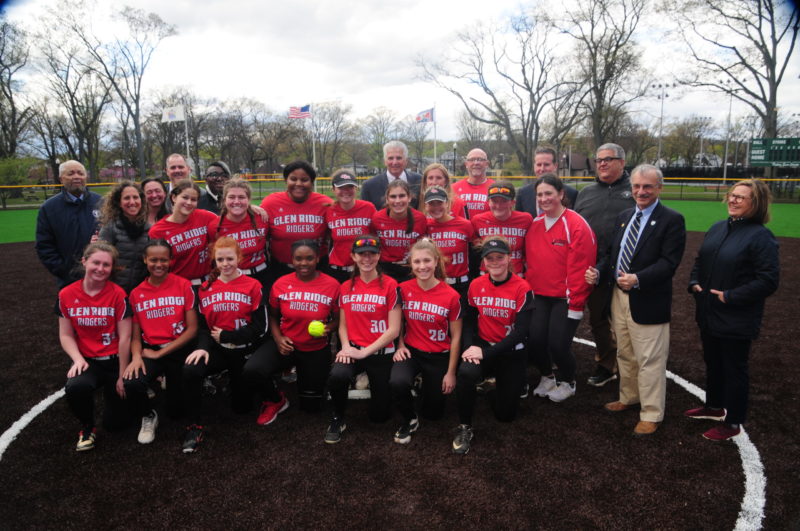 The softball field was first updated with a synthetic grass playing surface in 2009. After 13 years, the synthetic grass surface needed to be replaced due to regular wear and tear. Lighting at the field was upgraded with LED lights, which are brighter and more energy efficient. The scoreboard also will be replaced. The scoreboard has been delayed because of supply chain issues.

“We are always updating our parks and recreation facilities to make sure our youth and other visitors have the most up-to-date field on which to play. These fields provide our youth with positive activities where they get exercise, build social skills and learn sportsmanship,” said Essex County Executive Joseph DiVincenzo.

The improvements were designed in-house by the Essex County Department of Public Works, which also monitored the project to ensure delays were avoided. Landtek Group from Bay Shore, N.Y., was awarded a publicly-bid contract for $648,660 to perform the construction work. The improvements were funded with a grant from the Essex County Recreation and Open Space Trust Fund. The project took about four months to complete.

In 2018, the Wally Choice Community Center was renovated and updated. In 2017, the tennis courts and basketball courts, named for the late Bobby Hurt, were resurfaced and new equipment was installed. In 2015, the playground and restroom building received a facelift. In 2009, the community center was named as the “Essex County Wally Choice Community Center” in honor of Montclair resident Wally Choice, who has been President and Executive Director of Montclair Grass Roots, a community organization that has provided recreation and educational enrichment programs for children, for half a century. In addition, the football field and two softball diamonds were modernized that same year. The football field and softball diamond near the community center were upgraded with new irrigation and drainage systems and resurfaced with sod to improve playing conditions. Football and soccer goals were installed on the field. A synthetic grass surface was installed on the softball field in the eastern section of the park.

The Essex County Park System was created in 1895 and is the first county park system established in the United States. Opened in 1910, Glenfield Park is about 20 acres. It is the 13th largest park in the Essex County Parks System.